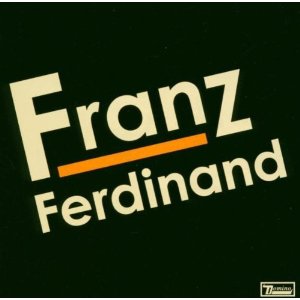 Scottish rockers Franz Ferdinand have been getting ready for today's release of their third album, Tonight: Franz Ferdinand: 12 tracks of "strong, jerky movements" with a "dirtier, nighttime vibe," as described by Alex Kapranos (vocals/guitar/keys) at a recent press conference held in London.

"Its just one big sex metaphor, the dance floor," says Paul Thomson (drums/guitar), and this dance floor is a central theme to the album.

After a year and a half of production, the band is excited to release this album fit to accompany an evening of clubbing. Tonight: Franz Ferdinand features several diverse genres and is an amalgamation of elements from their first two records, whilst including principles and melodies reminiscent of disco music.

"I can empathise with this character," says Kapranos of opening track 'Ulysses', a reference to the great tale of Ithaca. "[Being in a band] you can consider yourself to be a hero, but then realise you're not. This track, about as epic as Ulysses himself, is a great kickoff to the album.

The poppiest gem in the rough, 'No You Girls', along with closing track 'Katherine Kiss Me', are about kissing girls, the latter being a more emotional and vulnerable reality. 'Bite Hard' takes a turn with a cabaret-esque start, Kapranos singing with quiet piano in the background, but quickly moves back to the fast-paced dance-inducing sound.

Loyal fans might recognize 'Can't Stop Feeling', an older song the band decided to dust off and jazz up. While holding onto the same bassline and lyrics, there is definitely a much larger sound and deeper vocals reflecting how the band's work has since grown and matured. Perhaps the most impressive track is the nightmarish yet epic eight minute long 'Lucid Dreams'. With an extraordinary instrumental midway break, there is movement from catchy rock song to full out rave-appropriate beats.

Tonight: Franz Ferdinand is a fun album. The band's enthusiasm and passion for the music can be felt, and this is certainly their most impressive record to date. They also hope to release a B-sides album in the future, possibly titled That'll Do.

Franz Ferdinand is currently on a European tour, and will be performing at the NME Awards at the O2 Arena in London on 26 February, along with acts such as The Cure, Crystal Castles, and White Lies - tickets are available here.
Rate this item
(0 votes)
Tweet

More in this category: « Album Review: The Decemberists - Always The Bridesmaid Album Review: Max Tundra - Parallax Error Beheads You »
Login to post comments
back to top