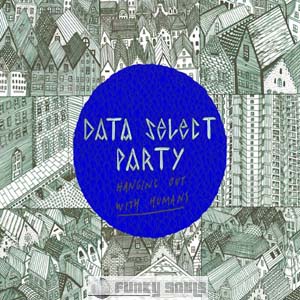 The opening of Data Select Party's EP/mini-album Hanging Out With Humans puts one in mind of the fantastic Dirty Projectors.

Clean, summery guitar burbles lock with a sprightly-moving round-sounded bass and off the beat drums. And I love the Dirty Projectors. Not only because the girls in it are beautiful and the frontman looks like a geography teacher, in fact, it's mainly because they're so fantastic and complex and dancey and beautiful and just, well, just wonderful.

The reason I'm gushing about Dirty Projectors in a review about someone else is that I'm a positive, summery guy. I like to walk down the streets scattering daisies and farting rainbows. I give sweets to children I've never even met before! Actually, that last one sometimes gets me into trouble, but what I'm trying to affirm is that I like being nice about things. And so the reason I was talking about Dirty Projectors wasn't really because Data Select Party sound like them, apart from the first twenty-odd seconds of 'The White Bear,' no, it's because I wanted to be nice about something.

Because it ain't gonna be Data Select Party. I really wanted to like them. I really wanted to hear some great up-and-coming British pop. I've been really getting into American indie recently, because the British scene is dying on its ass (see, I'm even talking American!) and I've been desperately casting around for a saviour to lift us out of the landfill that is UK guitar music at the moment. To be fair, they have a decent stab at lifting ideas from one of the few interesting British bands around at the moment, but even with their Internet pop culture references (the final song here is called - and strap back your gag reflex a second - 'The Woot The Hot The Hotness') and shouty backing vocals, Los Campesinos! they ain't. Los Campesinos! might talk about blogging, livejournals and ringtones, but their words are smart, eloquent and raise a smile however many times you hear them.

"We're dressed up to dress down, and turning heads all over town" is by no means an insightful lyric; it sounds like the sort of meaningless shout-a-long swaggery refrain The Fratellis might squirt out. And sprinkling Uniqlo references is all very well, but it doesn't achieve anything. These are phrases pulled out of conversations, but the effect isn't one of mystery, excitement, fun or anything except banality. And the vocals stink. I worked with a guy who was a total jock but was really into Emo, and noticing my interest in music he lent me a load of dreadful records in that genre - and that is what I think of when I hear the singing on Hanging Out With Humans. As over-sung as the average X-Factor contestant and with the typical horrible transatlantic accent of people who grew up singing along to Dashboard Confessional, Saves the Day and other best-forgotten skidmarks on musical history.

The guitars are okay, and the music is generally bouncy, if forgettable, but there is absolutely no way I can recommend Data Select Party for anything more than playing loudly to irritate someone upstairs, blaring it out of a window to stop cats mating or listening to it as inspiration to go and start your own band that manage to be poppy and interesting at the same time. Please?