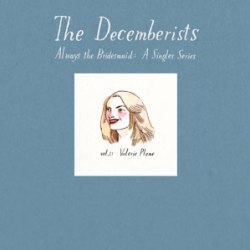 I gotta admit before we begin that I am pretty much a Decemberists obsessive. I can recite all of their songs and cried a little bit inside when I went to go see them on their last tour in the UK only to get to the venue to find it cancelled due to the band getting food poisoning. So I guess I shouldn't be able to give an entirely objective opinion on them; but I'm a professional so I will... ahem.

Since the release of 2006's Crane Wife, Colin Meloy and chums have seen their popularity sky rocket - featuring on the odd talk show and helping good old Obama by playing at his rallies. Always the Bridesmaid is named as a 'Singles Collection', and it pretty much does what it says on the tin, including 6 tracks that are and and out pop songs in the style of 'O Valencia!', for example, from their last effort. It is this style, and not so much the quieter acoustic one whichÂ isÂ dominant on their first '5 Songs EP'. This seems to be where the band is at at the moment and arguably the one that's bringing them the aforementioned success.

The only exception to this is 'Record Year' which sees Meloy harking back to a good old song about rain and making obscure references to Greek godesses. It is this narrative song writing that is Meloy's strongest asset, without a shadow of a doubt. In 'Record Year' he makes completely depressing and archaic statements come to life without breaking so much as a sweat; "What's the use of all of this? Is to remember you in the entire, because I'm watching it slip away, and in the annals of the empire did it look this grey?'" This, coupled with brilliantly crafted banjo and violin, is woven together to make the best song of the record.

The opener, 'Valerie Plame', is much more upbeat and shows Meloy enjoying himself: "'But Valerie Plame, if that really is your name, I want you to shout the same to the world." Essentially, if you were a fan of Crane Wife you'll like this and the second track; 'Days of Elaine'. 'O New England' is just a nice song about travelling, in New England surprisingly enough, and being enthralled by it all... aww.

Because it's a singles collection, however, the second half of the record doesn't seem to flow right and seems a bit jumbled. The cover of the Velvet Underground's 'I'm Sticking With You' is not great; it's a choice that seems a little at odds with the band and comes across as a bit forced vocally. 'Record Year' is also a weak track, and certainly wouldn't make a good 'single', which seems to be the objective really.

If you're a fan of the band's last effort and only have that then by all means get this -Â it's a continuation of form and is good overall. You'd be better off picking up the brilliant Picaresque though.

See, told you I could be objective.