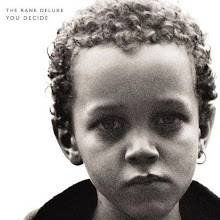 The release of Luke Haines' book Bad Vibes: Britpop and My Part in Its Downfall, consists of a great deal of bitter reminiscing about being part of one of British rock's nearly bands, this is actually quite timely because The Rank Deluxe bear all the hallmarks of a nearly band; the heard it all before hooks, the recycled guitar riffs and the carpet blandness that is not so much vanilla but utterly flavourless. Not even Heston Blumenthal could do much with the ingredients of this album, a collection of cornflakes and Ready Salted crisps.

In a time where a band's first album must make at least some kind of impact there is little room for a band to grow over time a la Biffy Clyro. You Decide is the sound of a band still playing around with their influences, to the point that the running order of the album is irresponsibly put together. The sadistic hamster being shaken up in a kitchen roll tube of 'Save it For Tomorrow' is an album opener if I've ever heard one, yet it comes in, acting as the spirit level almost half way through, attempting to hold the listen together, appearing after the cod reggae of the ironically titled 'Dole Queue' (because that's where these lads are heading towards, sorry too easy) and a handful of other forgetful jaunts. If you're going to shoot your load do it early, don't save the pleasure.

Lyrically The Rank Deluxe serves up some lite social commentary, though in these times of strife we (the listeners) are looking for storytellers and fantasists, dreamers and flighty optimistic types. 'They Don't Matter' almost appears a little too self aware. A sledgehammer blow to their own identity as a band, the song is certainly the most honest on the album, and sums up the fragility of their 'careers' as musicians. Though it may be faint praise, they should be applauded for this.

It's also worth complimenting the production of this record which at least captures the band's boisterous verve and energy, conjuring up the idea that The Rank Deluxe are a band that are certainly worth making a second opinion about once you catch them live.

I'm concerned that The Rank Deluxe will fade away and join The Dead 60's of this world on the earnest guitar band scrapheap. We've seen it before, the single that received a little radio play, the mediocre album and then the UK Tour. Sure it was a blast for a year and a half but is that all?