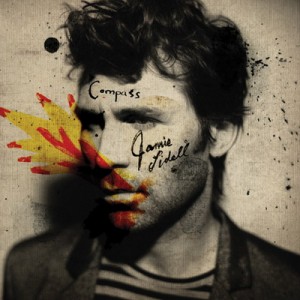 Jamie Lidell is not as well known in the UK as he is in the USA - but he’s an award-winner whose music has been featured on numerous TV programmes and adverts; who creates a strange type of music which sees funk and soul married with electro beats and beatboxing; whose music is generally quite innovative and, well, good. So why haven’t more people heard of him?

Perhaps Compass is the record to acquaint yourself with if you haven’t already heard much of Lidell’s work. It’s the fourth album from the British New York-based singer and is certainly diverse in terms of tracks. It’s a bit of a departure from the soul-heavy albums that have come before, but Jamie’s soulful voice still hits the ear as powerfully as before. As does the beatboxing, which is the first thing you hear on first track ‘Completely Exposed’. The vocals on ‘Your Sweet Boom’ sound like they could be Andre 3000, but sit well alongside a funky bass and drum beat.

Things slow down on ‘She Needs Me’, a somewhat long and drab song that wouldn’t be amiss in a badly made ‘70s love scene. Despite some cheeky lyrics like “I was hoping she’d let me in/For more than a cup of tea”, these are disappointingly coupled with other cringeworthy ones like, “Don’t ever let her go/she’s the sweetest thing you’ll ever know”.

The album gets back on track with ‘I Wanna Be Your Telephone’, while in a bizarre twist, the upbeat ‘Enough Is Enough’ has an intro very much like the soundtrack to Rainbow. Maybe it’s just the use of flutes, butat any rate, it’s a little distracting although the rest of the song is pretty good. ‘The Ring’ could be mistaken for a Stevie Wonder track; Lidell’s vocals sounding extremely similar and the unmistakeable riffs of blues-funk guitar and keys giving the song added ‘oomph’.  Piano features in ‘You Are Waking’ too; pounding chords sit alongside a furious drum beat - definitely something that would get you out of bed in the morning.

One of the highlights of the album, ‘Compass’ shows Lidell’s vocals off in a new light.  His soulful tones are almost mournful: “And now I know the only compass that I need/Is the one that leads back to you/And the burning blisters on my feet will call/To hold me as I’m close to floor...” Gentle guitar strumming and a string interlude, followed by percussive noise make this a joy to listen to. It’s probably one of the simplest tracks musically, but that’s what makes it stand out.

It’s innovation and creativity that are both Jamie Lidell’s strengths and weaknesses. While ingenuity with the arrangements make him an artist who is exciting and different, sometimes their complexity distracts from it all. Compass is a good album, but it’s on simpler songs like the title track where Lidell seems to come into his own. Yet it’s not a background album; listen to it half-heartedly and you’d miss all the musical intricacies. Despite not being his best album to date, it’s a very worthy listen and Jamie deserves to be given the recognition his music warrants.