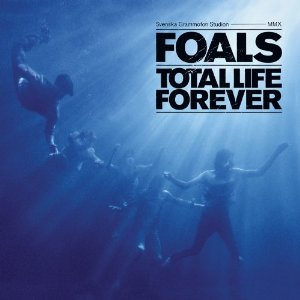 When Foals first unveiled their debut album Antidotes, it dawned on most of us that they were not a band who were particularly keen to do what was expected of them. Their earliest singles led many to expect a by-numbers Math Rock knockabout of a long player, but, much to the surprise of those who had them pegged as hipster fodder, Antidotes took a more considered approach than that. It combined fleeting bouts of bombast with moments that subtly worked their way under your skin, all of which made for a sharply enriching end result. It also showed that Foals possessed a stubborn determination to do things entirely on their own terms, and this is something that has continued through to second album Total Life Forever.

Lead-off track ‘Blue Blood’, builds from a fragile, reflective opening into something denser, growing so gradually that you barely notice the transition. This, really, is the album in microcosm. With each song that passes, and each repeat listen to the record, Total Life Forever reveals layer after layer until its majesty engulfs you entirely. It takes a lot longer to absorb than Antidotes, but once it has sunk in it becomes clear just how good a record this is.

It has been suggested that the process of making the album was a fraught one for Foals, and this is reflected in the tone of the music. Part of the reason that it initially proves tough to penetrate Total Life Forever is its largely gloomy nature. Much of the record sounds darker than anything the band have recorded before, but at the same time it is more rounded than any of their previous work, and, dare we say it, much more mature.

The entire thing hinges on the astonishing centerpiece, ‘Spanish Sahara’.  It is borne out of the darkest depths of the most miserable nights, and carries with it a sense of desolation that is particularly harrowing. Yannis Philippakis’ vocal delivery is that of a man completely exhausted, and adds to the almost suffocating mood of the song. It feels like there is a black cloud overhead, constantly threatening to erupt but which never quite breaks completely. It is this tension that makes the song so absorbing, no matter how disturbing a listen it is.

The despondency of ‘Spanish Sahara’ is followed by ‘This Orient’, which perks things up, but only in the slightest of fashions. In spite of its big single vibes and the gentle swell with which it builds, under the surface it still contains the same anxiety that permeates most of the album. A similar sense of timorousness can also be seen in ‘Black Gold’, whose chilly, isolated guitar builds into a vast, creepy final two minutes which are totally at odds with Yannis’ contention that “Spring is finally here”. Really, the only shaft of light to illuminate any part of the album appears early on in the form of ‘Miami’, which possesses a groove reminiscent of Friendly Fires and is probably the most overt pop song in Foals’ armory.

The songs on Total Life Forever are powerful in both concept and realisation, and a massive part in what makes the album so impressive is the way the music has been captured. Phillippakis’ voice is consistently affecting, as he sounds far more jaded than the young pup whose yelps punctuated Antidotes. The band’s musicianship is stunning too, with the jittery rhythm section combining with the characteristically chiming guitar to produce a sound that is, at different stages, graceful, sinister and beautifully nourishing.

So clearly Total Life Forever is a record that demands time and attention, and in return it offers more than its predecessor. Even this early in their career, there are suggestions that Foals are masters of reinvention, something which puts them completely in control of their own destiny. When Yannis sings “Singularity is here to stay” on the album’s title track, it is as honest a lyric as he will probably ever deliver, because for Foals it is quite obviously their way or no way.