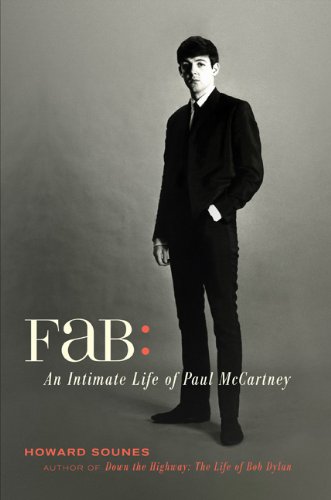 For the best part of the past fifty years, Paul McCartney has been one of the world’s best known musicians. From the chart friendly pop of The Beatles’ early music to the more experimental nature of their later work, he has led and informed many musical trends. The music that he wrote with John Lennon is timeless, and continues to work its magic on successive generations, and a lot is already known about his life. The musical successes and other artistic endeavours are well-known, as is the deep well of tragedy that has run through his life; starting with the early death of his mother when he was just 15, to the tragic early deaths of his Beatles colleagues Stuart Sutcliffe, John Lennon, and George Harrison, and the death of his beloved wife Linda, who was so important both as McCartney’s muse and as a member of Wings. So what does Howard Sounes’ biography offer that similar works do not?

Fristly, the book is the most up-to-date of McCartney’s other biographies and is the first to include details of McCartney’s ill fated marriage to Heather Mills. Additionally, the book also takes apart the Beatles myth, and includes details of the deep resentments that led to the collapse of the band. It also examines Lennon and McCartney’s relationship, revealing how their friendship was broken when the Beatles split up, but had started to heal by the time that Mark Chapman’s actions on December 8th 1980 tragically intervened.

The book is also interesting in tackling McCartney’s life from the beginning, and over its over 600 page span covers key events from McCartney’s early life, such as his promising talent in Art and for intellectual pursuits before music became his over-riding passion, the first fateful meeting with John Lennon, and auditioning for The Quarrymen. It also takes in the hot and sweaty nights in Hamburg nightclubs, the band honing their act with Pete Best and Stuart Sutcliffe, before they found the missing ingredient in drummer Ringo Starr. Then comes the description of The Beatles taking over the world with the help of manager Brian Epstein and producer George Martin, how their sound and songwriting changed the three minute pop song format, all leading up to their acrimonious split in 1970, which left behind a lasting legacy of timeless creativity. The book also looks at McCartney’s second great band Wings, which was never given the credit it deserved, no doubt because of its leader’s previous band’s success, in addition to McCartney’s successful solo career, and his collaborations with such heavyweight figures as Stevie Wonder and Michael Jackson.

Sounes is celebrated for his definitive work on Bob Dylan, Down the Highway: The Life of Bob Dylan, and Fab shows a similar attention to detail. The tome took more than two years of investigative work, and Sounes spoke to more than 200 people who had access to McCartney in all of the areas of his life, from family members, to studio engineers and producers. What is revealed is not always the thumbs aloft smiley Beatle that McCartney was in the 1960’s: he is shown to be deeply caring about people, but ruthless when it comes to money and his legacy.

The family life that McCartney developed with Linda, adopted daughter Heather, and children Mary, Stella, James, and Beatrice is well documented, making clear his desire to raise his children to respect the natural world, to know the importance of money, and to make their own contributions to the world, in spite of their world-famous family name.

All in all, though, this book is about the music, and McCartney has produced a lot of it — from 'Hey Jude', 'A Day in the Life', 'Eleanor Rigby', 'I Saw Her Standing There', 'The Long and Winding Road', 'Yesterday', and a catalogue of other songs written with The Beatles, to hits with Wings, such as 'Jet', 'Band on the Run', and 'Silly Love Songs', to solo works such as ‘Pipes of Peace’, ‘Wonderful Christmastime’ and ‘We All Stand Together’ and the three albums that he recorded under the name of The Fireman, which show McCartney’s interest in ambient and techno music styles.

The book ends with a description of McCartney performing in front of a sold-out audience in Germany, in front of some of the people who had supported his early career in the city, and it reveals a certain circular arc to the McCartney tale. Here we see the only surviving Beatle still playing the songs of his youth that had an impact on all of our youths — whether we came to the music first, second, third or fourth generation listeners — and carrying the load lightly, with evident enjoyment. Thanks to Sounes, we learn that Paul McCartney is not quite as the myth would have us believe: while he is no saint, he has left the world a legacy of fine music, and taught us a lesson in how to mature in the public eye without losing too much of himself along the way.

Fab: An Intimate Life Of Paul McCartney is available now from amazon and  iTunes.

More in this category: « Mick Rock - Exposed Le Freak : An Upside Down Story Of Family, Disco And Destiny By Nile Rodgers »
Login to post comments
back to top