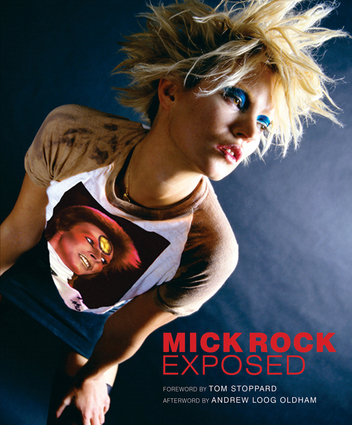 For over four decades Mick Rock has been photographing the great and good of the music industry, as well as those not so famous, and the best of these images are now available in his new book.

Rock is known as "The Man Who Shot The Seventies" mainly for his work with David Bowie, in his Ziggy Stardust days, along with classic shots of the late Lou Reed and Iggy Pop.

Many of these images are captured in Exposed and they paint a pretty graphic account of the hedonistic days when rock ’n’ roll was very much about doing everything to extremes. One image of Iggy Pop doing a backbend is, according to Rock, "the most rock and roll image".

However, Rock has included a number of images of models that show his ability to do straight-up studio work as well which disproves the claim made by some over the years that he was lucky and just in the right place at the right time. Not so - he clearly has an eye for a good image and happened to meet the right people, giving him access to some of the most recognisable faces in music history.

Muso’s Guide caught up with Rock at a book signing event for the paperback release of the book, which originally came out in 2010, in the Pretty Green store on London's Carnaby Street and times have definitely changed as Rock had nothing stronger than a large coffee from a well-known tax dodging outlet sitting next to him, "Yes things are different now, it's different times. I'm older but I still love it."

Asked how he settled on the selection of images in the book he said "I wanted a mixture showing the full range, a number of them are unseen before and, of course, there's the classics in there too." These days Rock has moved to digital as it's "easier" which means the modern images have lost some of that grainy and gritty appearance that is so typical of his older images.

Rock continues to expand his range of collaborations and his current one sees some of his most iconic images of Ziggy Stardust adorn a limited run of t-shirts produced by Pretty Green.

Exposed is available from amazon.

More in this category: « Glyn Johns - Sound Man: A Life Recording Hits With The Rolling Stones, The Who, Led Zeppelin, The Eagles, Eric Clapton, The Faces…. Fab: An Intimate Life Of Paul McCartney By Howard Sounes »
Login to post comments
back to top