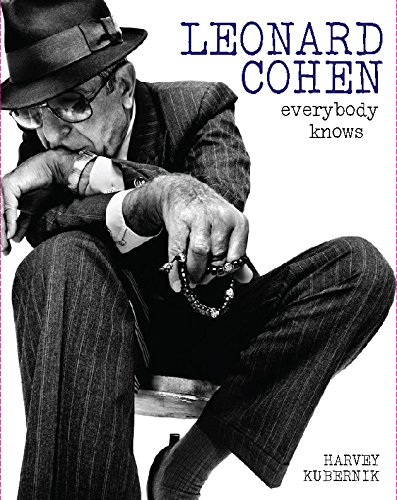 Everybody Knows is a sumptuous coffee table tome for either the casual or dedicated Leonard Cohen fan. Published to coincide with the legend’s 80th birthday later this month it cannot be faulted (& I highly doubt it could be bettered) when it comes to the wealth of photographs of the man himself, his books and albums & those personalities he’s worked with or otherwise known throughout his career.

Of those two types of fans previously mentioned the latter is less well served in terms of the book’s written content. In defense of this it could be argued that this is not a book that’s designed to be read from cover to cover (unlike Sylvie Simmons’ I’m Your Man, which we reviewed here in 2013 & which is recommended in the further reading section at the back of Everybody Knows, with quotes from Simmons featuring regularly in the main part of the book), rather it is for dipping in to and flicking through. How often you’d find yourself or others doing so is the question. For my part I can’t see it being a regular thing, there being that many other books to either do that with or to read from start to finish.

As an easy access reference work, clearly well researched and filled with a level of quotes and anecdotes from all period’s of the great man’s career, from friends and admirers alike, that is easily on a par with that of the images, the book does though fulfill its purpose magnificently. Sure there’s the odd editorial lapse where these are concerned (who is the "Scottish poet" that Simmons mentions in her quote on p44?, for example) but such things may be tidied up in later printings and, by its nature, this isn’t a book designed to provide thorough analysis of the man behind the myth or vice versa.

Harvey Kubernik has therefore added a further significant, accessible and image-lavish book to the stock of Cohen lore and in doing so maintained his position as one of the foremost authorities on the life and works of his magnetic and mannered subject, the man “born with the gift of a golden voice”.

Everybody Knows is published on September 21 and available from amazon.

More in this category: « Daniel Rachel - Isle Of Noises: Conversations With Great British Songwriters Glyn Johns - Sound Man: A Life Recording Hits With The Rolling Stones, The Who, Led Zeppelin, The Eagles, Eric Clapton, The Faces…. »
Login to post comments
back to top