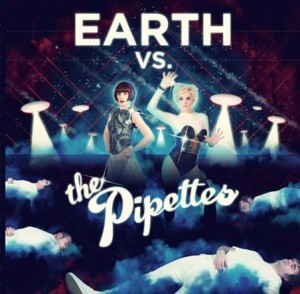 Yeah! Ladystuff! Though one could be forgiven for being wary of any artist describing their foray into genre music as ‘an experiment’, The Pipettes (the name being svengali mastermind, ‘Monster’ Bobby’s sly wink to the ‘meta’ part of the group) were an example of a band that rather than merely putting quote marks round a well-worn sound, managed to reinvigorate the style.

They were a band that used the Spector-shaped tools, but remained very much of their moment. Lyrics about boys and stuff aside (although to be honest this comprises most of their output. 90%... maybe 95), they wrote songs that were rounded and interesting, harmonically complex, whilst generally just being a bit bloody cool about the whole thing (and who doesn’t like the polka-dot revival?!?). Big, layered production combined with a mercilessly cut-back structure made for pop that embraced fullness and succinctness at the same time. The Pipettes were genuinely one of the most fun, exciting and brassy girl bands to come out of the 00s. So you’ll be pleased to know they messed this album up anyway.

The big drum, sugar-harmony, Shangri-la vibe has been substituted with a disco-tinged, more brassed up affair, and Earth vs. The Pipettes findsSaunders’ sister, Ani, taking the place of Rose Dougal and Rebecca Stephens. She’s got some serious diva lungs on her, possibly contributing to the bizarre fact that, although it snubs the genre leanings of its predecessor by increasing its scope to a slightly odd mix of disco-synth and lounge guitar funk, Earth vs. The Pipettes manages somehow to sound more generic.

Choreography and matching outfits takes a lot of stamina, and no one was expecting another 14 track doo-wop affair – the new sci-fi theme is a brave effort (though a bit tenuous – publicity art aside, the whole thing seems to revolve around a couple of tracks about aliens [and boys... again]), but although more leftfield on the surface, the hooks are much more forgettable, and to be honest, some of the album’s camper moments have a bit of a 'Return to Forbidden Planet' feel about them. This is probably deliberate.

So The Pipettes are still badasses at churning out ‘self-manufactured’ girl-orientated sugarpop, but the problem is this – you can open up your scope to include a greater breadth than reusing styles that arguably reached their zenith fifty years ago, or filter your post-fem poppishness through a camp, synth-space vibe, but when you remove yourselves from a niche market you go up against pop acts masterminded by people like Xenomania, making a very profitable career out of marketing and writing songs specifically designed for the charts. And as everybody knows, you do not fuck with Girls Aloud.