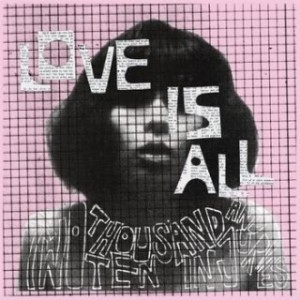 Love Is All have come up with a formula for a large percentage of Two Thousand and Ten Injuries: craft jittery, spiky melodies and smother them with the shrieks and vocal tics of lead singer Josephine Olausson. This isn’t necessarily a criticism - for the most part the album fizzes with unadulterated joy, but – as with most things in life – you can have too much of a good thing.

Consumed in one sugary dose it all gets a bit too much, but by listening to it in snatches you can fully appreciate the inventiveness that lies within. Opener ‘Bigger Boulder’ sets a high standard, with its Strokes-like opening riff giving way to razor-sharp guitars while Olausson muses about the peculiarities of love. By using heavy Afro-pop percussion, ‘The Birds Were Singing With All Their Might’ recalls mid-career Talking Heads and elsewhere ‘Kungen’ draws heavily on sixties girl-groups to tell a surreal story about Sweden’s monarchy.

There are crafty little earworms lurking everywhere, but their sheer individual brilliance often gets lost in the overall haze. ‘Early Warnings’, ‘Less Than Thrilled’ and ‘Dust’ are delightful offerings but all three struggle to assert themselves on an album that while not repetitive feels very much like a random collection of (admittedly, very catchy) individual tracks with no overall theme.

Sandwiched in among the pop-punk pick ‘n’ mix are some of the band’s more measured and reflective songs. ‘A Side In Bed’ is a slow burner, gradually adding layer upon layer until Olausson shouts out a list of demands over soft saxophones; album closer ‘Take Your Time’ uses Johann Pachelbel’s Canon in D major to convey a feeling of intense longing and even though the lyrics are virtually nonexistent it still packs an emotional punch.

Prior to recording the album the band split with their record label, a move that often results in a change of direction. However, this hasn’t really happened with Love Is All. The familiar sound that served them so well on their first two albums is still present and there are four or five stand-out songs, but that’s just what it is: a collection of singles. In an era where the album, as a concept, is being increasingly thought of as redundant, maybe this approach doesn’t matter. Still, in this case, it seems that the parts are much greater than the whole.