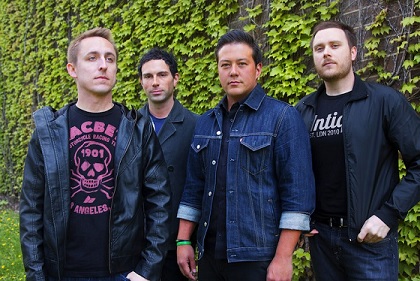 I started out my Yellowcard fan career with a CD or two loaned from a friend, and now I have *ended* it with a free ticket to their last ever show in Glasgow, so it's certain that the fun-cost ratio of this band has been pretty phenomenal for me. Being the first and last time seeing this band, the set resembling a greatest hits record was something of a blessing, showcasing to me the band's highlights throughout all those years I missed since Paper Walls.

Whilst the set was suitably mixed up, I can't help but feel that playing a reverse order retrospective ending with 'Ocean Avenue' would've been highly appreciated by the crowd, but they do have considerably more than one album after all.

Playing 23 songs in total, the usual quartet is expanded to a quintet by stand-in drummer Jimmy Brunkvist of Like Torches, who put in a blistering performance, outshone only by the charisma of violinist Sean Mackin and his skills in getting the crowd fired up. With a career spanning set, the band's emotive and distinctive brand of pop punk had the Glaswegian whipped into one final flurry for at least two hours.

Frontman Ryan Key's sincere introductions and heartfelt thanks strung the night together, as he explained the gravity of certain songs, and simply inspired some powerful sing-alongs like you would expect. From the rousing opener 'Believe' to the euphoric closer 'Ocean Avenue' the band took control of the venue and showcased why their art has sustained then for 20 years.

The intense one-two of 'Gifts and Curses' and 'Cut Me, Mick' towards the end of the set were particularly enjoyable, with the emotion of the slower songs like 'Sing For Me' providing some respite throughout the lengthy set. Overall, if this quality is replicated on ever night of their extensive tour, then Yellowcard will be leaving their fans with hoarse voices and fond memories, which is the most you can really ask for, and a fitting end to a band some would consider legends.