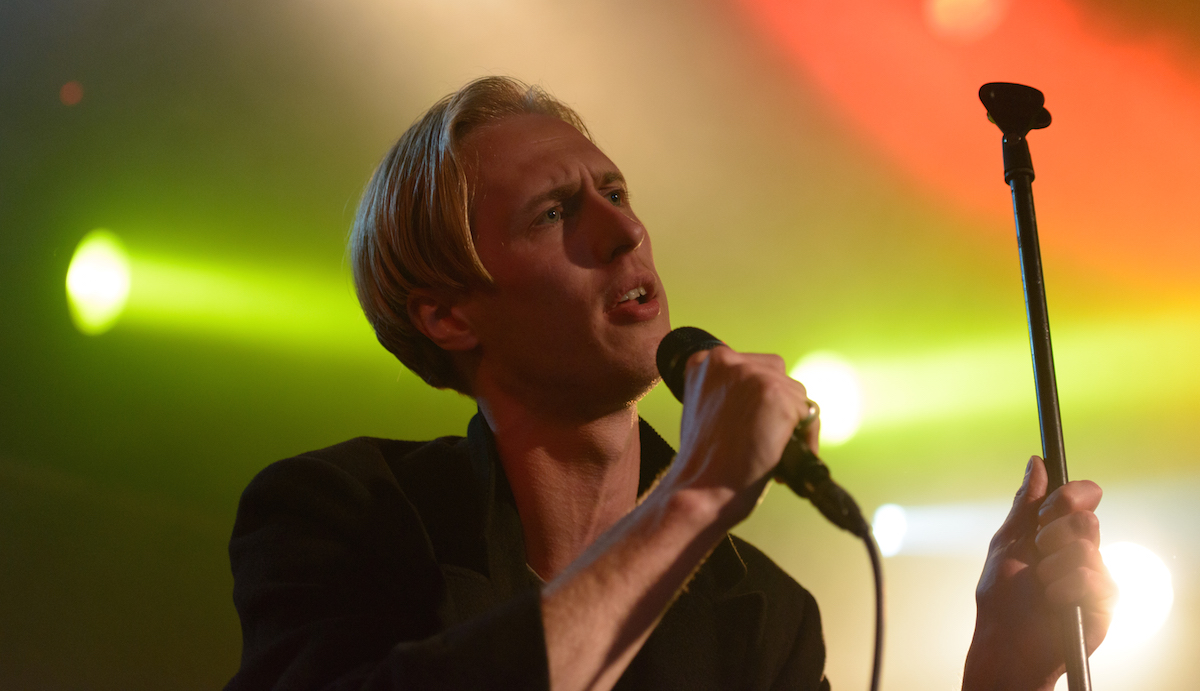 Having spent three years studying at Leeds Met (now Beckett) I seemed to spend a disproportionate amount of time being ferried back and forth along the M62 to Manchester, and as a result, the prospect of once again boarding a National Express after a beautiful two years abstinence, seemed daunting. Though plagued by flashbacks of drunk Scousers, recycled air and feral children, I persevered and found, somewhat bizarrely, that in the last two years a strange transformation had happened to the UK's best-loved coach company and my journey was actually pleasant. Probably something to do with the dozen or so hangovers that were making the trip with me.

Arriving in Leeds, basking in the familiar smell of Greggs (the UK's best loved bakers!), the hangovers are yet to kick in; a man pirouettes elegantly, clutching a water bottle filled with what looks like white cider. It's 10am. Having come to Leeds as a student, and finding myself living a piss-width from a Methodone clinic, instead of just finding myself, this is unsurprising, and in a strange, alcoholic kind of way, welcomingly familiar. Fortunately, whilst beers are in full flow as we arrive at Key Club for the opening set of the day (coming from local lads Forever Cult) no-one is, as of yet, on quite a similar level to my friend from the coach station.

Taking to the stage as a four-piece (member number four coming in the form of a rather surprised looking inflatable doll, complete with Forever Cult t-shirt) the sheer volume of the band is enough to eviscerate any morning-after wooziness from within the early crowd. Ripping through previous singles such as last year's 'Yasmin' and the recently-released 'Winter's Glow', the band harbour the kind of West Yorkshire grunge that's both indebted to the '90s, yet seeks to distance itself from it also - a fact perhaps most evident in bass player Alex Greaves' super skinny jeans, which somehow manage to avoid a tearing despite his most acrobatic efforts. Absent from the band's set is early single 'Sun Trap', and whilst its omission doesn't detract from their set in any way, shape or form, what it does suggest is a preference, from band and fans alike, towards the sludgier, weightier tracks at their disposal. Closing the set with a colossal shapeless breakdown of wailing noise, it's obvious why the band are so popular in both Leeds and West Yorkshire as a whole.

Next stop: Gaz Coombes, who's playing at the O2 Arena; a beautiful converted church with great acoustics. Surprisingly, he’s on at the early time of 1:30pm, and despite feeling quite organised, he’s already playing as we rush through the doors. We’re not the only early birds however, as the room is almost full. Looking up we see the seats above well attended, too. Gaz is on stage wearing his signature hat and moves between keys and guitar as he ploughs through the songs. The audience is receptive, and ‘Detroit’ goes down particularly well – we all join in with the “There’s panic in my heart” refrain. He closes with ‘Girl Who Fell To Earth’ and we leave feeling rather satisfied.

Next up, it’s Get Inuit, which sees us back once again at the inconspicuous Key Club. We descend the stairs and enter the venue which is already half full, and the crowd keeps growing - especially as the quartet get going. Lead singer Jamie is a lot more talkative on stage than Gaz Coombes was; saying how much the band are enjoying Leeds, bigging up their label-mates who’d been on just before them, and introducing most of the songs they’re doing. The audience seem to enjoy it (we definitely are) and there are many silhouettes nodding in appreciation to ‘Cutie Pie, I’m Bloated’ and ‘Dress of Bubblewrap’ to name a few. Get Inuit are an excellent mix of Beach Boys harmonies and Vampire Weekend beats, and we’re thoroughly impressed. Later we’ll decide they were our favourite act of the day. 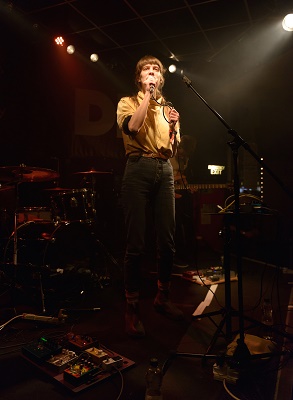 It’s back to the O2 for Stornoway, who, after Get Inuit seem like old hands. They’ve been around for years, and their polished performance really reflects that. They’re a friendly bunch – they say it’s “a privilege to play on the same stage as Gaz Coombes and Dry The River” and it looks like they’re having loads of fun throughout. Everyone is most impressed when someone on stage starts wielding an axe – but it’s all part of the instrumentation…not that that’s any less impressive. They launch into a stripped back song that sounds familiar, and it turns out to be a fantastic cover of Yazz and 'The Only Way Is Up’. It really divides the audience – the young people look completely blank, whilst the older contingent sing along with glee. Stornoway end their set with ‘Zorbing’, which goes down really well and is a great ending to a brilliant performance.

Not just a festival of British bands, Live At Leeds proves its worth once again this year, as not even half way through the day when Russia’s newest exports Pinkshinyultrablast take to the stage. Their own brand of ethereal post-rock transcends that of your usual fare, as singer Lyubov struts around the stage, her voice transforming at every twist thanks to the plethora of electronic devices she has at her disposal. There was never a doubt in our minds that the band would quickly puncture the indie underground, as the beautiful sounds of 'Umi' fill the room, we’re completely infatuated by these incredible Russians. 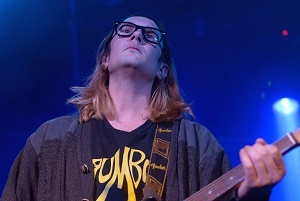 At the opposite end of Leeds' grunge spectrum, and already a Leeds institution, Menace Beach hit the Leeds Beckett SU stage for the second year running. Somewhat of a supergroup, the band features a revolving cast of members from bands such as Hookworms and Pulled Apart By Horses, as well as mainstays Ryan Needham and Liza Violet, and fair far lighter than earlier bands, providing some much needed early-evening respite, at least when compared with what's to follow. With a full album now behind them, the band unsurprisingly draws a larger crowd than last year, playing a set back-boned by album tracks such as the suitably scuzzy 'Tennis Court' and the dream-poppy 'Tastes Like Medicine'. Unfortunately Liza's vocals do seem fairly lost at times, and so the tracks do lose a certain degree of melody. However having seen Menace Beach on numerous occasions between us, we know this isn't a regular occurrence.

In a line-up heaving with hometown heroes, the aforementioned Hookworms are arguably amongst the most reputable. Turning the Beckett SU in to a haven for those who have clearly indulged in a little more than just beer, the band's fusion of krautrock and neo-psychedelia is both nostalgic and futuristic; anachronistic '60s organs in bizarre harmony with synth drones providing an auditory trip like no other. Though their set is built mainly around tracks from last year's The Hum, full blown psych freak-outs form the bridge between those tracks, whilst 'Off Screen' offers something a little less brain-melting.

The last act on our personal agenda is Rhodes. It’s a bit of a trek to get to Wardrobe where he’s playing, and we’re disappointed to find that after rushing to get there he’s delayed on stage by quite some time. Most of the band are already on and waiting to perform; they’re looking more and more fed up by the minute. Eventually Rhodes comes on and apologises for the “technical difficulties”, but as the set goes on it’s not difficult to see that the band are still unhappy with things – there are lots of gestures, waving and pointing going on by various members. Frustrating for them, and distracting for us. Still, the overall performance is worth the wait. Rhodes does about half an hour, including ‘Your Soul’ and ‘Breathe’ (which sounds rather epic), and looking around the venue, it seems he’s captivated his audience.

After waiting over a year to finally see Eagulls live, there was no we were passing up this opportunity. And whilst the majority of people seemed to head either to the bar or another venue after Hookworms, we headed towards the barrier. Another band on home-turf, and our final act of the day, their set proves to be a far less hallucinatory experience than Hookworms, and though it's stark, brutal and blisteringly loud (so much so we move off the barrier), it also proves to be one of the most impressive sets of the day. Swathed in long almost-militant jacket, singer George Mitchell stalks the stage, his figure tall and imposing though skeletally thin against the stage lights. Assaulting their fans with staggeringly post-punk. Tracks such as 'Hollow Visions' and 'Nerve Endings' feel like an all out barrage, whilst the likes of 'Opaque' and 'Possessed' soften the blow, if only slightly. Though their set is predominately formed from their self-titled debut, and those were the tracks we want to hear, it will be interesting to see what their, hopefully immanent, second album will offer. Batter and bruised and left blinking in to the stage lights we end out day on a high.

With the day drawing to a close, our feet heavy and minds firmly blown by the day's proceedings, we have room for one more band. Bursting on to stage in their own inimitable fashion to a packed house at the Brudenell, Slaves are hot property right now, proven by the fact they’re about to embark on a massively sold out tour. It’s immediately apparent as to why there’s a buzz about them, cracking open tonight’s set with 'White Knuckle Ride' sets the visceral tone.

Both Lawrie and Isaac are in the highest of spirits as they feed off the energy of this heaving mass of flailing limbs, it’s almost impossible to comprehend the excitement in the room. Tearing through a set featuring the insane 'Feed The Manta-ray' and sing-along favourite 'Where’s Your Car Debbie?' Slaves prove they’re a true powerhouse and a force to be reckoned with, we’re sure this is the last time we’ll see them in a venue this small.

Live At Leeds is a great festival to get stuck into – especially if it’s the first time you’re going to one. The nice thing about it is that you can dip in and out of the action as you please, and most venues are near each other (there are one or two which are a bit further afield, but you can avoid these pretty easily if you want to). There are always at least a couple of acts you’ve heard of playing – this year, Slaves The Cribs and Gaz Coombes are probably some of the most recognizable; but it’s just as exciting taking a punt on someone you’ve never heard of and seeing an act at the beginning of their career. You don’t have to queue too long for the loo (the bar is another matter) and you can go home, shower and sleep in an actual bed at the end of the day. We’re already looking forward to next year.