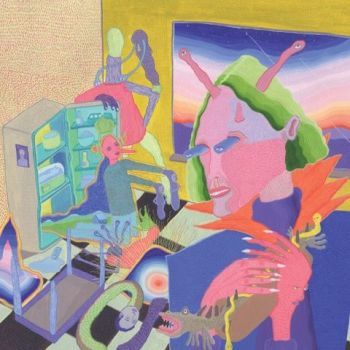 Album number two from The Wytches finds the band in fine form, two years on from debut release Annabel Dream Reader. Still existing on the darker side of modern psychedelia, the ten songs here (there's an intro but you can hardly count that in) come at you with no quarter given.

'Can't Face It', for example, has some fearfully angry vocals at its heart. This is a band who've had their horizons widened & their eyes opened with the coming of the greater exposure occasioned by that first album. They've not exactly been mellowed by the experience.

That's not to say there aren't gentler parts within the album. 'A Feeling We Get' is certainly a bit more laidback in terms of pace but its vocals are as heartfelt as anywhere else on the work and there is still room for some strident guitar parts.

All Your Happy Life therefore is clearly as much of a tongue in cheek title as you'd probably have guessed from the record's artwork. The band remain the musical equivalent of Ben Wheatley's A Field In England.

By this point in a career many bands will be spoken of as having matured in some way. All Your Happy Life shows that The Wytches were mature to begin with, the core elements of their sound are such that they weren't so much ripe for development as much as being capable of stretching and expansion over the wider framework the band were always capable of fitting them to. They just required the investment of time, energy and life experience that the past 24 months have afforded them.

All Your Happy Life is a delight from start to finish and should be a joy to behold when the band head out on the road around the UK in November.

Here's the video for 'C-Side' for you to look at too:-

All Your Happy Life is available from amazon & iTunes.

More in this category: « JEFF The Brotherhood - Zone Luke Haines - Smash The System »
Login to post comments
back to top