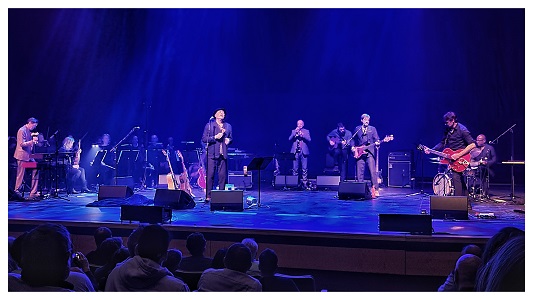 Is there such a thing as a subtle flair for the dramatic?  I’m imagining something along the lines of sleight of hand by candlelight.  It’s been 30+ years and Tindersticks have lost neither their ability to surprise or put out ‘the soundtrack to my life’ albums.  On this bank holiday weekend, we’re fortunate enough to catch their first performance in the capital in three years largely due in part to the obvious (hint: our equivalent of the blip).

Sitting in the auditorium of the Royal Festival Hall, the stage is presented like a plate in a Michelin Star Restaurant; wide open in front of you with subtle complexity.  Perfectly lit, at least from row J.  The plush comforts one might find in a boutique cinema; tons of leg room, comfortable seating arm rests for days and being able to see over everyone's head all whilst sitting down, unfolds before us.  The stage feels like it’s at chin-level.  We could get used to this.

Stuart A. Staples soon saunters out on stage bathed in pools of midnight blue, that purple haziness, you know the one.  The audience comes alive with a polite clap and subdued affirmations, they’re rewarded in equal measures with hushed lyrics whispered into the mic.  The first tune, ‘Willow’ comes out as thick velvety as the smoke from the fog machine.  The hall was pregnant with anticipation so weighted you could easily hear a pin drop.  I’m not sure if it felt like we were being teased with the slow and unhurried pace of the music or if we were teasing the songs out of them.  In either case, I appreciated the anticipation of wanting to hear more.  The pace was molasses but so was its viscosity.

I leaned over and asked our +1 what she thought of ‘Another Night In’ over our golf claps between songs, ‘what language is he speaking?’ was what I got back.  I assured her both Stuart is and was speaking English.  Were lyrics important when there was so much going on in between the words?  A single wooooooooo hoooooooo stretched out across the auditorium from the crowd eerily juxtaposed against the gently sloshing of maracas.  Tones of Western skies and deserts woven throughout with the help of a hollow bodied Gretsch and Les Paul washed over us.  A lone trumpeter took to the stage halfway through appearing only after a spotlight fell on him.  It’s his time to shine as he unwaveringly holds a note in ‘Sleepy Song’ for what feels like ages, thoroughly impressive as it is evocative.

As the xylophone, keyboards, saxophones, and a half orchestra take the stage the set too starts to feel like it’s stretching out beyond the ages, and yet, it goes on.  The mystery of what and who’s to come next has come and gone along with a variety in the sound, the hand’s been played.  There are now 10+ musicians on stage and we’re at 1 hour and 40 minutes in when I sneak a peek at my phone, to take notes of course.  The audience members leaving in droves.  We thought they had gone to the loo over the past 20 minutes but had had yet to return.  The kid sat next to us was fast asleep.  The set by this point had ballooned to 18 tracks and continued to expand to a final 22 including encore.  30 years of music is no small feat, hell, 30 years of anything is nothing to sneer at.  Unfortunately, trying to cram it all into one night when the human attention span keeps shrinking, I dunno, it’s at a record low currently, 8 seconds.  That’s shorter than a goldfish!  Anyway, what was I talking about?  Oh yeah, aside from the set needing a hearty chop it was a solid time in the ole city.  Reminded us a lot catching Lampchop at the Barbican 10 years or so ago.