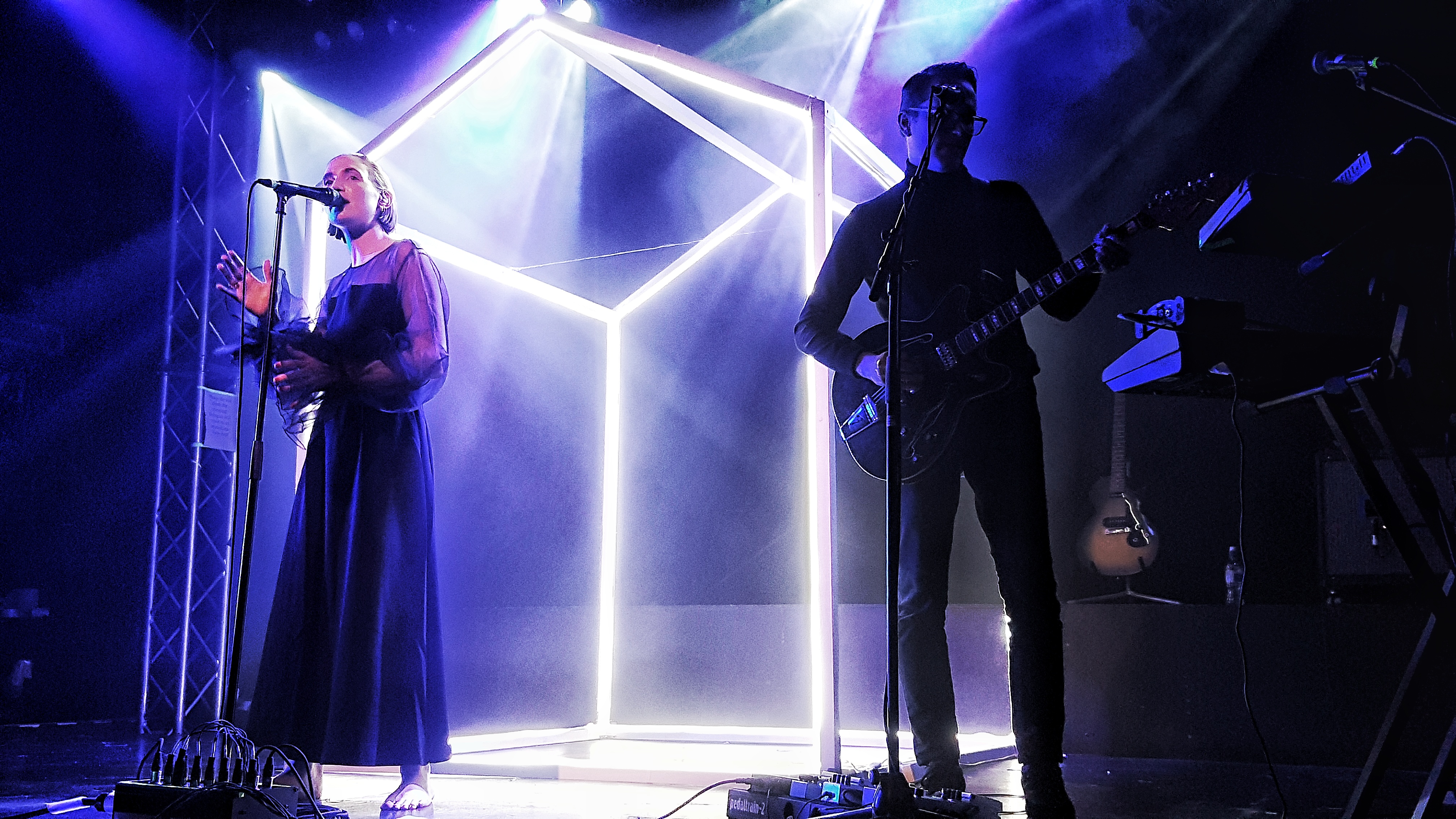 Pandora, by way of Greek Mythology, was the first woman. Her name translates to all-gifts and was herself a gift from the Gods to mortals. The Gods' gifts in myths always came at a price however and although temporarily bestowed prosperity often led to ruin. With her, Pandora, carried a vessel brimming with evils which once inevitably opened released them and so they are found among us still today. This was the price we'd pay for Prometheus' treachery. The box was never fully emptied however before the lid was clamped down again. In the end all that remained was hope, trapped, eternal and just out of reach. Let's lay off evils for the moment shall we and turn our focus towards a different type of protagonist like the one curating tonight's events otherwise known as Woman's Hour (@womanshourband). A showcase we caught at The Dome, which is in the shape of a rectangle rather than a half sphere.

It's been a while since we've heard any new music from the group and they haven't toured for about 3 years now. When the London-based musicians formed in 2011 singles started to trickle out until 2014 when Conversations, their first full length album, finally came out. Although enjoyable listening to tracks over headphone and through tiny speakers I've never been afforded the opportunity to see them live and I often wondered if I would. The band hadn't released new material for a few years now and asking around no one seemed to know of or remember them, the internet was quiet too. Then when catching up on music midway through February a quiet full length release from Woman's Hour popped up. As always before even listening to new music I checked for tour dates, as luck would have it they'd be playing in about a month's time. I got in touch with the promoters and thought myself lucky when I heard back that I'd secured a spot for the show, I had no idea at the time I'd be writing my first eulogy.

Support acts finishing up (@ElsaHewittx and @IamTallSaint) and both putting on solid performances were filed away under up and coming in my mind palace for further investigation. The stage then was quickly transformed for ... the final act. The lights drop low and a large black curtain is pulled free from the bare and skeletal remains that once, or never was, a house. Although the stage is now set it still feels eerily vacant like an unfurnished room, sure the band isn't on yet but it doesn't look like a setup for a full band. 1 microphone and a double-decker keyboard stand; I always understood the group to be a quartet. The lights go out completely and the first few bars of heavily processed vocals and synths reach my ears, From 'Eden To Exile To Dust' ring out. There are 4 members now on stage, 2 of them however are dancers clad in white kimonos (or some facsimile thereof). I don't have time to overthink what I'm seeing now because it sounds and looks great but I'm left wondering what am I seeing? It's a complicated track full of plucked  strings rife with tension leaving notes dangling in the air. When the bass and synth chime in around the chorus the tone changes to an appeal both melodically and lyrically which are much softer, don't push me from Eden to exile then into dust. It's a precise and chaotic mixture. Several variations and hooks make up the structure, wrought with restrained agitation tugging at each other, and us, throughout the song and the set. It feels like something much darker and larger looms within and over the piece unseen and trying to get out. The rest of the performance is filled out beautifully supported by a carefully crafted light show design and a well choreographed dance rotation peppered throughout the evening's music.

During the first quarter of the set only short pauses in between songs songs take place. Will's focus is singular, on his instruments and equipment rarely looking into the crowd. Fiona plants herself barefoot on stage in an elegant yet mournful black dress with chiffon sleeves, moving and swaying in motions reminiscent to how a canopy would in a high wind. She's looking just above but not directly at the audience as she sings and averts her eyes downwards after each song.  I find myself conflicted by what I'm watching, I'm deeply enjoying the music but there are melancholy vibes at the same time. I think the audience can feel it too because although they cheer between each song with enthusiasm at times there's an almost imperceivable tinge of hysteria in it. 15 songs made up the show ranging between singles and tracks from both LPs. Personal favourites like 'Our Love Has No Rhythm' and 'To The End' were played to name a few. Mid-set we even got a Springsteen cover, 'Dancing In The Dark', shrouded in mournful tones. The the last song, 'Removal Of Hope' served as a conclusion to the performance and an epilogue to Woman's Hour. You'd be hard pressed not to have enjoyed the performance which was emotional and evocative and very personal. Fiona asks founding members Josh and Nathan who are in the audience to come on stage acknowledging the band wouldn't have happened had it not been for their contributions. They stand together one last time, link hands and bow(out).

I ran into Will after the performance who asks me if I'm coming to the after party where I can try some of his homebrew an invitation I don't hesitate to accept.

Will: Did you enjoy the show?

Cpt: Yeah I did, reminds me a lot of the Still Corners gig I caught in early December in a way.

Will: You think so? You know years ago we toured with them and ...

At this point we're interrupted by security who ask us to leave, I never did get to finish the conversation with Will at the after party or start one with Fiona or Josh that night and chances are I never will now. This brings me back to our myth with the troublesome Pandora. Looking over the setlist initially I thought it bleak with 'Eden To Exile To Dust' as an opener and 'Removal Of Hope' as the closer leaving an evil trapped inside the box. Having thought it over a few days now I've come to glean a different understanding of what Woman's Hour was saying all along. Removal of hope doesn't take it away or discard it, it just places it outside of the box which at the very least makes it visible, and at most attainable. Thanks for a 8 years of solid music with a powerful and very memorable final performance.