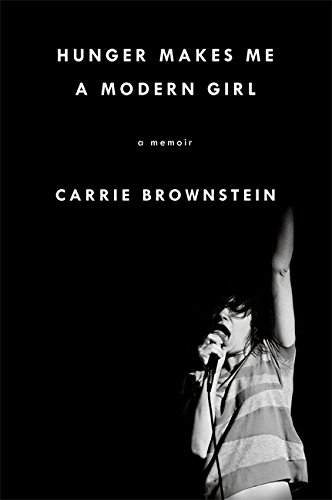 No one I knew in my late teens & twenties was into Sleater-Kinney or if they were they never mentioned it. Consequently the bulk of my experience with any of Carrie Brownstein’s work is through a binge watch of series one and two of Portlandia a couple of years ago. At the start of reading Hunger Makes Me A Modern Girl she was therefore basically an unknown quantity.

The book starts with a cliff-hanger – Brownstein’s ill on tour with shingles and about to kill off Sleater-Kinney. As the band have since reformed & released No Cities To Love this is hardly edge-of-the-seat stuff. The first proper chapter follows her getting into music in the same way as many kids in the late Eighties and early Nineties - enjoying the pop aspects of bands like the B52s, the full on pop of Madonna and then getting a bit older and discovering punk etc. So far so normal.

Where this is going though is not into the realms of ‘look at me, I’m different’ when in fact the writer is anything but, but rather the fact that Brownstein retains the memory of being a fan and the “validation” that comes from you’re being acknowledged as such by the objects of your fandom (daytime soap stars in her case). Putting yourself in the shoes of others when dealing with their correspondence. Where the early parts of the book tend to drag though are the life-lesson bits that aren’t of use to a future singer/guitarist/actor. Whilst no two family disintegrations are the same there’s still a generic pattern constructed from a limited stack of elements – hospital admissions, teenage tantrums, neglected pets, breakdowns in communication etc. and having read about one you’ve a pretty good idea of what goes on in the rest, other than the most sensational ones.

The break-up of the family home (and the new start that Brownstein’s father’s coming out allows in later years) aside, growing up and adolescence seems to have followed a pretty ordinary trajectory – rebellion in the form of a Misfits sticker on the car bumper, discovering older bands and finding musical clarity in the work of newer acts (Bikini Kill & the K Records stable), forming a first band etc. but underpinned by reasonable academic achievements. A failed attempt to join 7 Year Bitch and a baptism of fire supporting Codeine in her own band Conspiracy A Go-Go finish off part one of the tale.

Recruiting drummer Laura MacFarlane in Melbourne, the one-take nature of the swift recording of the Sleater-Kinney album, touring the US west coast as Riot Grrrl as an expressive and expansive scene blossomed and the equally short recording process for second album Call The Doctor begin part two of the book. A lot in a short space of time. The band’s playing itself “right into existence” and the inevitable inane media hassles of being an all-female group (why were they such a thing? etc.) begin to be covered. As Brownstein rightly points out no one asks all-male groups such nonsense.

Two changes of drummer later Janet Weiss completes the trio. Brownstein & Corin Tucker realise she’s the missing link and the band finally solidifies. They decide who to sign with for album number three (Dig Me Out), walking on eggshells during the process so as to not offend the rest of the scene, a consideration that eventually came to exemplify The Who’s line “Meet the new boss, same as the old boss” in terms of punk’s elitism. Another short recording time, the title being apt due to a heavy fall of snow (at which point the tale of the broken car window struck me as something of greater interest than other information). European touring follows with no great excitement for the reader.

Spending more time together on the road (for album The Hot Rock), a back injury and other factors result in frayed tempers, relationship therapists are met with, All Hands On The Bad One is recorded. At this point on the book my interest dipped noticeably. Having never been in a band and pretty much viewing musicians as there to entertain & possibly educate me through their work (and happy to leave them alone to do so) accounts of songwriting processes etc. leave me cold although they’re no doubt of great interest to aspiring musicians. Remembering you stepped in dog shit 20 years ago isn't really worth passing on to the wider world though.

Oddly worded (or poorly edited) sentences (‘…”anorexia” was like a prize I had won in a drawing someone entered for me on my behalf …’) and the strange need to explain things like what COD stands for and that ‘merch’ is short for merchandise aside, this is definitely a good read in terms of having to go off and find music by the numerous bands named within it (Heavens To Betsy, Kreviss and of course Sleater-Kinney amongst others) and the documentation of the closeness of the Seattle & Olympia scenes as grunge fuelled the nascent Riot Grrrl and punk bands of the second generation. It’s probably of greatest use though to kids who’re of the ages that Brownstein covers in part one (she went through a lot and came a long way before even hitting 18) – as a middle-aged adult with all of that well in the past myself there was nothing to be gained from that first 70+ pages. Possession of & by the work of particular bands rather than just the thrill of their initial acquisition is maybe where our make-ups differ. The act of being caught up in the minutiae of performances is, however, expertly captured; shows where the intricacies of playing and singing go hand in hand with seeming revelations of the band members’ inner selves and their shared dynamic, never minding that the sound may be less than ideal.

The bits about Brownstein’s own existence though and that of the recording and touring life of Sleater-Kinney just don’t add up to anything particularly interesting. Plenty of bands probably go through their entire existence with no major hassles or dramas (or if there were any the descriptions herein render them barely noticeable). She’s still on a journey to get to grips with her existence it seems (some closure on that issue is achieved on the tour for No Cities To Love). Maybe we all are but she has the benefit of being aware of the fact. Fair play and she’s doing it the best she can. This book, however, confirms for me that it’s not always that interesting finding out about the nuts and bolts of someone else’s day job.

Hunger Makes Me A Modern Girl : A Memoir is available from amazon & iTunes.

More in this category: « Joe Satriani And Jake Brown - Strange Beautiful Music: A Musical Memoir Book Review And Giveaway : Rollaresque By Simon Goddard »
Login to post comments
back to top