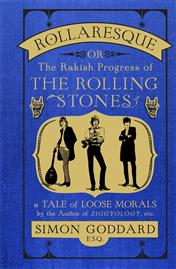 “That some gentleman are born to be estimable Sparrows and set their store in etiquette and epaulettes, shiny buttons and shoe polish, white collars and whiter gloves, ‘Please Sir’ and ‘Thank you, Madam’, strict codes and unbreakable conditions. And others are born to be Rolling Stones and grant nature liberty to curl their hair, scruff their heels, loosen their collar, wet their whistle and bulge their breeches with blissful disregard for all stipulations as might be printed, displayed and brought to their attentions by the scowling sentries of enforced decorum.”

The Rolling Stones' rise to fame came with a heavy batch of debauchery. ‘The bad boys of the music industry’ came with a bad reputation, a drug bust and multiple prosecutions. Rollaresque by Simon Goddard gives a unique picture of life in 1962 for five men in adolescence and the beginnings of a rock and roll band.

From the book you can draw the conclusion that a common trouble the Rolling Stones had with the people of the '60s is the fixation with their shaggy hair doo’s, so much so, that a section of one of the four parts should be dedicated to it. It would then leave the rest of the biography to be about other things, like their music, which coincidently is what is missing from Rollaresque. For the avid music fan, it may come as a disappointment to read that there is a lack of tales about how songs were written or how relationships were formed. The majority of tales are about romantic encounters, run ins with the law and travelling to places like America and Morocco, which at times become repetitive and regrettably easy to flick through. Some of the tales though are at least humorous and do provide a detailed look into the world of a Rolling Stone, one of which stems from the weak bladder of Jagger and another from the bed sheets of his once lover, Marianne Faithfull and a fellow band member.

The book does look back honestly into the beginnings of Brian Jones’ descent into drug abuse and his fight with his own personal demons. The struggles of a rock star seem to always stem from their battle with fame. Jones hated how the media saw the Rolling Stones which went hand in hand with his jealous tendencies. Jones is however the only character that is truly explored; Bill Wyman, Charlie Watts and even Mick Jagger and Keith Richards are left to be just unruly figures within the band.

The fast pace of the book is quite melodic and the chapters are relevantly short. This does draw you closer to each page and it does make it harder to put down because it feels like you are half way through an untold story. If you do not enjoy the workings of writers such as Dickens or Thackeray then this book may not be to your liking as it does mimic their writing style. Simon Goddard has written in a style that pays homage to such great writers which he does rather well. At times however, the style and the context clash and it becomes a little too contrived and you find yourself rereading pages to see what you missed.

Rollaresque is a unique take on the traditional biography. Its detailed complexity and unusual writing style is accompanied by eight impressive ink illustrations which add character to the pages. It takes a while to get used to the way of wording in the first opening chapters but the prose does become entertaining as the book continues. Rollaresque is an interesting read and provides exciting tales of the first five years of antics and bad behaviour, it is just a shame that stories of the band's actual music are lacking.

Rollaresque is published on August 6 by Ebury Press and is available from amazon and iTunes.

Should you though want a copy for free the first UK-based person to tweet @musosguide with the hashtag #MusosStones will be contacted by us and a copy sent along (not open to anyone connected with the site of course, sorry).

More in this category: « Carrie Brownstein - Hunger Makes Me A Modern Girl : A Memoir Chris Adams - The Grail Guitar : The Search For Jimi Hendrix’s ‘Purple Haze’ Telecaster »
Login to post comments
back to top