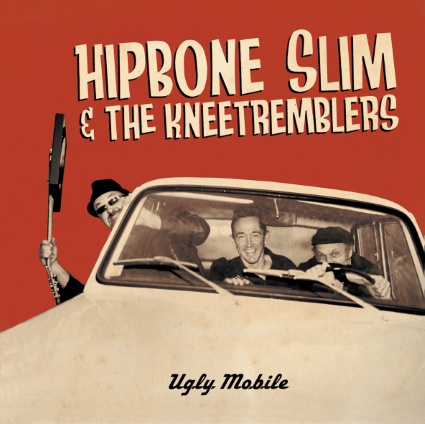 Sir Bald Diddley/Hipbone Slim, whatever he decides to call himself you can’t deny the man’s prolific & in for the long haul. Unfortunately you need to be a bigger fan of surf and older rock ‘n’ roll than this reviewer to properly appreciate the him. I stopped buying his records at a point some years ago when it all started sounding much too similar. Possibly I was forcing it upon myself somewhat (you can’t after all like everything equally) but something had to give.

Entertaining in general as he was at the first Franklin Fest last year in Edinburgh, what with performing atop a table etc., his was one of the sets that grabbed me the least over that excellent weekend (all of those I was less enthused about were in a similar vein so the clues are all there really).

On Ugly Mobile, his fifth outing on vinyl with The Kneetremblers in tow, ugliness, baldness and other favourite themes are returned to with varying degrees of gusto. Songs about particular women & their traits & foibles are sung in the great tradition of the pioneers of the sound the band carry off so authentically (‘Sally Mae’, ‘Ramona’) and the eternal question ‘Why Can’t I Find (What I’m Lookin’ For)’ is asked.

For my money, at least a while ago, The Reverend Horton Heat’s take on this sort of thing was more appealing but then that probably had a lot to do with the pace at which he generally executed his output. In isolation this is overall a good listen & I’ve probably approached it with a bit of historical baggage. Instrumental ‘Heiroglyphic’ certainly has the surf of Dick Dale down to a tee and disappoints only because it lasts barely two minutes. Elsewhere ‘Don’t Know Where To Start’ injects a plaintive note that probably shows off Sir Bald’s vocals better than any of the other 13 tracks on offer.

He’s been at it a long while and isn’t likely to stop and no one can say there’s a lack of craft or talent in what he and his associated players do (as is the case across the wider scene of which his acts make up a part), I personally just need more pace and garageness when it comes to this sort of thing (along the lines of final track ‘There’s Only One Louie’ – a true stomper if ever there was one).

Ugly Mobile is available from amazon.