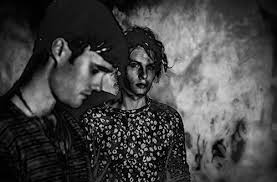 This seems to be a good moment to look back at some of the tracks that were on some of my favorite albums of the year 2015!

Track of the Week: ‘Cruel Mistress’ by Crazy P

It starts off with a nice beat and some ace keywork, and then the smokey, lovelorn vocals come in, and I’m sold. A lovely disco turn from stalwarts Crazy P, and I’m not only talking about this track. The whole album is built to dance, with great vocals from Danielle Moore. And here she sings that Every time I talk, every time I walk, and every time I sing, I want to hear you. In the mean time the drums and bass keep the rhythm going, the synth adds another layer and some flavor, and then when the chorus comes in they get to a piano, a nifty little riff, and a barebones beat, on top of which the vocals yearn for love, singing that they are losing their head. As said, the whole album is wicked with top turns all around the corner, showing that they haven’t lost their touch at all. Au contrair, I would say. [Unfortunately the file

‘I Thought The Future Would Be Cooler’ by YACHT

YACHT is always immensely fun, live perhaps even more so. But also on album, like they showcase again on last year’s 'I Thought The Future Would Be Cooler'. It’s an observation as to where the world is heading, railing against some of the things that are happening, both politically as well as socially, from drones to the whole data collection bonanza. But, not in a lecturing, finger-wagging way, but one with plenty of fun wordplay and, perhaps more importantly, plenty of catchiness in the music to do some dancing to. The verses have a nice rhythm to them to shake your hips to, and the chorus picks it up a notch as they sing that, geez, I thought the future would be cooler. There’s a serious element in the message, but it’s bubble-wrapped in having fun, and that’s a killer combination as far as I’m concerned.

‘Call It Love (If You Want To)’ by George FitzGerald feat. Lawrence Hart

George FitzGerald starts this one off with an almost ‘Chinatown’ synth start, with soon the beat coming in to move this one forward. Then Lawrence Hart arrives with his deep, moody vocals, singing that If you want to call it off, then you can call it off, as the synths are upped in intensity before, at about the 1:13 mark, a deeper bassy synth takes over, bolstering the rhythm section as we are dancing the blues away. Extra drums at 1:45 help out in the depth department, joining the vocals. At 2:15 there’s a short stop and stare before first the synths come in, then the cymbals, finally the Chinatown start, before the whole shebang comes back in to get the dancing going again on top of the vocals. Just a fabulous debut album from the guy.

Maybe I’m not the best Hot Chip fan out there, because I do think this album might just be their best, an opinion I’m sure many don’t agree with. But as far as catchy tunes are concerned, there’s a boatload of them here. Usually with a bit of fun and tongue-in-cheek added in there, and also touching upon some of the themes of the modern world that might be worth thinking and talking about. But, mostly, it’s about tunes, and as said, there’s just so much fun in this package for me. On ‘Huarache Lights’ they, at one point, get to the chorus, where they sing Replace us with the things that do the job better, with the vocals at one point being swapped out for a more robotic voice, which is just a nice touch. There’s also some soul singing in there, but there’s especially tuneage in there, with lovely drums, catchy rhythms, and plenty going on music wise to hang your hat to. The album title alone, Why Make Sense?, is both throwback as well as applicable to the album’s feel as a whole.

‘Too Much Is Never Enough’ by Bob Moses

On the Domino label Bob Moses churned out his debut album, and that album is just a wicked combination of atmosphere and a bit of a dance feel with the beat always there to provide some rhythm and backbone. Here, too, there’s plenty of percussion to form the canvas on which Bob Moses paints his story, both with words and atmospheric sounds, singing You lost it all before, you feel the blame, whilst the synths then come in to sing their own melancholy song. At 2:07 the pace gets ramped up a bit for the chorus, with the vocals, too, showing a bit less restraint the way they do in the moody verses, pointing out that Too much is never enough, for me. After that he slides into an instrumental interlude, during which the beat moves slowly to the front as it keeps an eye on the pacing while the synth and guitar make sure the feel of the song stays strong. The album is full with those niftily crafted songs, a well done debut for sure.

‘Call It Off’ by Shamir

In terms of fun, Shamir’s album (and live show) definitely is one not to miss out on. This track gets the beat going on top of a nice wobbly synth riff, with Shamir’s high-pitched vocals singing that It’s time to call it off, adding that This time, it’s not my fault. The track is a nice, super catchy marriage between pop, disco, and house, adding some fun also in the clip, where they get some muppetry puppetry going on. Live, like the songs, it’s all colourful, fun, and ready to party, even with a slight apathetic delivery at times, which I kind of dig personally. Another debut, this one also encapsulating a certain youthful energy that helps enjoying this one even more.