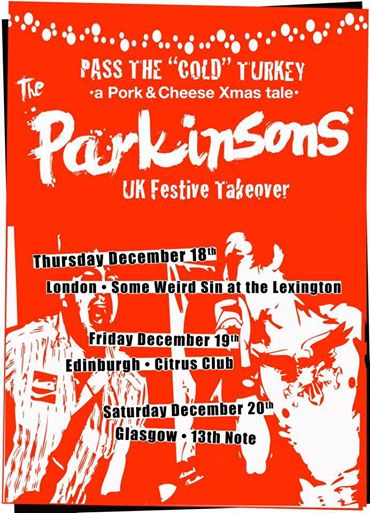 Those primal princes of Portuguese punk rock The Parkinsons are back in the UK for three dates in the week before Xmas. you know a ticket's the best gift you could buy yourself.

With their BBC recordings (which pre-date debut album Long Way To Nowhere) released earlier this year as the Rare Sessions 12" and 2013's Back To Life album in need of a further live outing the quartet are set to play London, Edinburgh & Glasgow on their UK Festive Takeover.

Since getting back together in 2011 the band have tirelessly toured and are particularly pleased to be getting back to London, where it all took off for them back at the start of the 2000s, as well experiencing the usual frenzy exhibited for them by Scottish audiences.

Tickets for the London date can be obtained here, Edinburgh here and further information on the Glasgow date is here.

More in this category: « T in the Park 2015 Announce Early-bird Tickets Hozier Announces Spring 2015 UK Tour »
Login to post comments
back to top