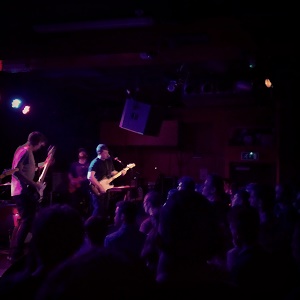 Before We Were Promised Jetpacks roll onto the stage, The Lexington crowd is treated to tremendous support from fellow Scots Fatherson, a Biffy Clyro inspired group of 20-somethings who grab the room by the scruff of the neck with snapping drums and superb vocals. Emblematic of angst-ridden indie rock, Fatherson are a tight outfit that seem destined for huge success. Festival main stages are surely just one or two hits away.

A small wait later and Scottish Indie Rockers We Were Promised Jetpacks burst out of the traps. Now as a five-piece, welcoming Stuart McGachan in on keys, the band have truly mastered the art of the build-up. With phenomenal thunderous rhythm behind each and every song the set is packed full of energy and the hardcore fans at the front are regularly sent into frenzy throughout the night.

Following the release of Unravelling, their third LP, front-man Adam Thompson announces, that “this is the final night of our UK tour so let’s have a party.” With that, every note played and every drum hit feels like it is building to something and it’s clear that even those who had clearly been taken along by friends and partners can’t resist getting involved as the band hit full-throttle.

The difference in style between Unravelling and previous releases, These Four Walls (2009) and In the Pit of the Stomach (2011) is stark when new material is interspersed throughout the setlist. With a slightly slower tempo it creates less furore, feeling more mature and bass-driven, with more intricate compositions replacing the racing indie riffs of old.

All in all, it’s a hugely energetic show and the crowd ricochets to ‘Short Bursts’ and ‘Quiet Little Voices’, while the highlight of the night comes through ‘Keeping Warm’ which ambles to a huge crescendo sending the venue into raptures.

The band depart with ‘It’s Thunder and It’s Lightning’ from debut album These Four Walls and the intensity of the track peaks as Adam Thompson screams, “Your body was black and blue.” As it does, it is as if Thompson’s voice is stretching so far it might snap, but it’s this passion, mirrored by the crowd that make We Were Promised Jetpacks so captivating live and a few bodies certainly will be black and blue on Thursday.