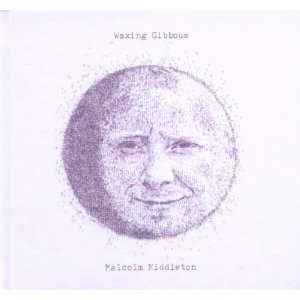 There's an odd dichotomy at play between the title of Malcolm Middleton's fifth solo album, Waxing Gibbous, and its lyrical themes.

When the moon is in its Waxing Gibbous stage, it is one step away from appearing as full to us folks in the Northern Hemisphere (a half illuminated moon is also called a dichotomy. How about that for some coincidental linkage?) With this in mind, you might expect to hear Mr Malcolm Middleton telling us tales of his growing confidence and how he's approaching a certain completion as an artist but alas no, Waxing Gibbous is a 12 track trawl through the mind of a man who is blatantly uncomfortable with who he is, where he is and what he does. It's an honest and refreshing album full of quality tracks but ultimately it can be a draining experience.

Things start positively enough with the oh-so-obvious first single, 'Red Travelling Socks'. Its driven power pop opens the album at a decent clip, immediately bringing to mind The Boss's 'Dancing in the Dark' and Bob Mould's Sugar. It's the kind of single that would have had me scrambling for the record button of my tape player as I listened to the top 40 on a Sunday afternoon way back when pop music was for everyone.

'Kiss at the Station' is evocative and rings bells on a personal level, as it will for anyone who's ever dealt with a long distance relationship. It's a warm love song with a pleasing simplicity to its lyrics like “Target is your heart, destination lips”. However, the lining of Middleton's clouds are never silver and he tempers the sunshine of the track with a change in the weather; “Rain is coming down and I don't know what to do. Rain is coming round and I don't know what to tell you.”

Pessimism seeps in again during the brilliantly written and delivered spoken verse of 'Carry Me'. Middleton muses on his missing super powers (which are in the post) and how he should be partying on yachts like Duran Duran. The slightly throwaway chorus doesn't detract too much from this striking song but man oh man is it depressing.

He's at it again in 'Zero': “Just can't seem to get on with the man that I've become.” And once more in 'Don't Want to Sleep': “Everything I do is redundant. Everything I say is a lie."At the half way point of the album you just want to grab hold of him and say “Malcolm, it's ok! You're actually quite good at what you do, stop bloody fretting man!'

Album standout 'Ballad of F*ck All' inflates the goosebumps with its haunting droned intro and beautifully played guitar. Lyrically, it's one of the bleakest tracks I've heard in a long time with Middleton lamenting about being bored in the “soul destroying gloom”.

Waxing Gibbous, as you've no doubt garnered, is a deeply pessimistic album. It's also honest, refreshingly revealing, excellently written and well performed and produced. It's maybe best to think of it like a bar of 80% cocoa dark chocolate - bitter with a smooth richness which is difficult to fully digest in a single sitting.