An expectant crowd await the afternoon's proceedings at The Parlour bar on Leith Links, just a short walking distance from the main venue of the Franklin Cricket Club. Compact and bijou it's both very busy and very hot. I recognise some familiar faces from last night's excellent shows, some obviously a little worse for wear, but on the whole jovial and ready to rock.

The Reverse Cowgirls commence this afternoon's show. They competently throw out a bourbon-soaked country tinged rock 'n' roll in the order of Eddie Spaghetti, with a tinge of Southern Culture On The Skids thrown in there for good measure. They definitely brought to mind images of trailer parks in the Deep South. They did a good job of warming up the crowd, on what was already a hot day (well, by Edinburgh standards anyway).

Second up are The No-Things, a local 4 piece no nonsense '60s influenced garage rock band. Suave front man Laurent (of Les Bof) never fails to enthuse the crowd - he is a natural performer, and it's contagious. Before the set he moves around pieces of furniture in the tiny space available to make room for his big persona - and when the band get going he starts off jumping up on a chair, clapping his hands and daring the crowd to come and get some! Luckily the crowd are in a co-operative mood. The guitarist gives a bit of chat in between songs; he's quite funny in his tuxedo t-shirt and white jacket (which he makes a joke of before anyone else has a chance to get in there!) Laurent calls for audience participation with 'Who Did You Love Bob' (at least I think that's what it was called!). A short set, but none the less very sweet. They sound good, and will no doubt be as successful if not more so than Les Bof.

Lastly Glasgow's The Bucky Rage are up, adorned in a variety of wrestling masks and capes / ladies hosiery. Not that this kind of gimmickry is anything new in the world of garage punk; and I would be very surprised if they did not have the likes of the Rip Offs / Thee Mummies / Von Zippers and many other '90s non-hit making punksters in their own record collections. They do not disappoint however, sounding for the most part as good as they look. A fast and trashy cover of 'Wildman' is thrown into the mix for posterity. When they are good they are very good, but there are a few numbers that seem to be reminiscent of a previous band, and don't quite fit. And then I see through the stocking clad head of the drummer/singer and can just about distinguish him as the lead singer of The Reverse Cowgirls - okay, now it all makes sense, or does it..?

All in all, a fun afternoon, and if you didn't have a weekend ticket, this gig was free - you can't really ask for more. 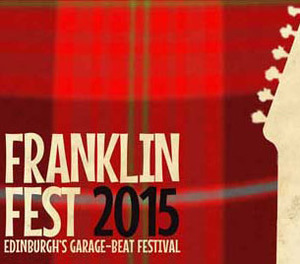 With less than two weeks to go can you really afford to miss out on the greatest garage, beat ‘n’ roll event ever staged north of Newcastle? Over July 2 – 4 the cream of the UK scene will gather in Edinburgh across three venues for an unrivaled weekend of lo-fi trash & Sixties-related punk raucousness.

Along with the previously announced opening night at The Safari Lounge and the two subsequent nights at the Franklin Cricket Club the Saturday afternoon now features a free show from The Bucky Rage and The Reverse Cowgirls in The Parlour a stone’s throw from the main venue.

Tickets can still (just) be obtained here and here. Whilst walk-ins may still be possible on the Friday and Saturday nights you don’t want to risk missing out do you?

The running order for the event is shown below & you can listen here for a taster of the weekender:-