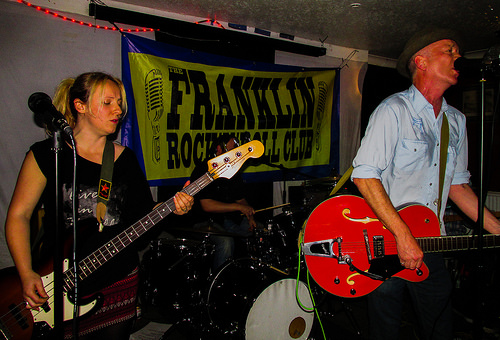 Musos' Guide, as a rule, doesn’t usually review cover bands, however Fanny Pelmet And The Bastard Suits definitely deserve a mention. Not only because they covered some of my personal '60s favourites such as The Standells' ‘Rari’, The Eyes' ‘You’re too much’, Sharon Tandy's ‘Daughter Of The Sun’ and Shocking Blue's brilliant ‘Send Me A Postcard’ (debuted at the Franklin tonight!), but also because they are a breath of fresh air, and are helping to keep this amazing music alive.

Fresh from their tour supporting the King Khan & BBQ Show 'down south' are Newcastle’s Ferriday Fireballs. Singer Flyin’ Brian is a bit of a legend, and latterly a member of one of the most fabulous garage bands ever - Los Coyote Men. They open with The Stooges '1970' followed by a raucous rendition of George Jones's 'White Lightnin', but it's not all covers and their very own ‘She’s A Twister’ proves to be on a par. The crowd love their hypnotising primitive beat. It's stripped to the bone rock 'n' roll at its best or worst (depending on how you see it - but let's go with best), and above all it's a FUN show. Brian encourages the crowd and bar staff to dance, and there's cheeky banter, followed by lots of stopping and starting. It all gets a bit shambolic; the Fireballs' knocking out a few random punk covers - but it’s certainly entertaining. Finishing with a cover of Bo Diddley’s ubiquitous ‘Who Do You love’; Stephanie Pelmet joins on harmonica, Andy Bastard Suit takes over guitar duties, whilst Brian goes a bit loopy ‘it’s the codeine kicking in’ he tells us... :) 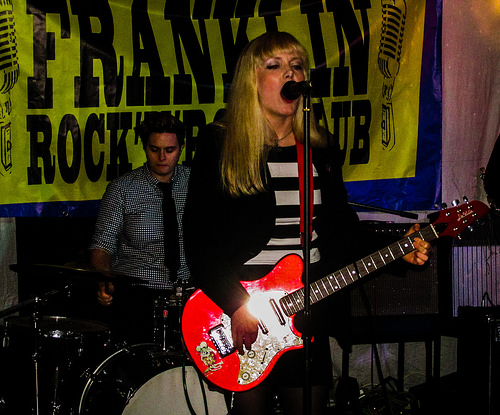 Top of the bill tonight are The Reverse Cowgirls from Glasgow opening with their new single ‘Hit The Sidewalk’ which has a distinct, soulful garage groove. Their Facebook page quotes that they ‘write simple music and make it complicated’ and I can’t disagree with that, because it’s really difficult to define their sound, spanning punk/blues/country/garage and more. Possibly taking their influences from the likes of Gun Club / Cramps / Primevals; but it would be very unfair to say that they are restricted by the sum of the output of their contemporaries. They have their own unique and potent sound. They are extremely accomplished with a massive presence; "In a completely different league" a friend said. And even though there are only four of them, the Franklin almost seems too small to contain them. Frontman Hugh McLachlan is quite mesmerising. He appears to go through the full range of emotions tonight. Bassist Alaine Alison Walls is right there by his side, and they naturally complement each other, and of course not forgetting the other members of the band who make up this powerhouse. Notable moments are the fuzztastic 'Cry Cry', country style 'As God's My Witness' and 'God Bless The Queen' = a very happy crowd. We hope you come back soon.

Well done to the organisers again for another cracking night - The Black Needles and Oh! Gunquit will be playing at the next Franklin Rock 'n' Roll Club on Friday 13th November - click here for details...