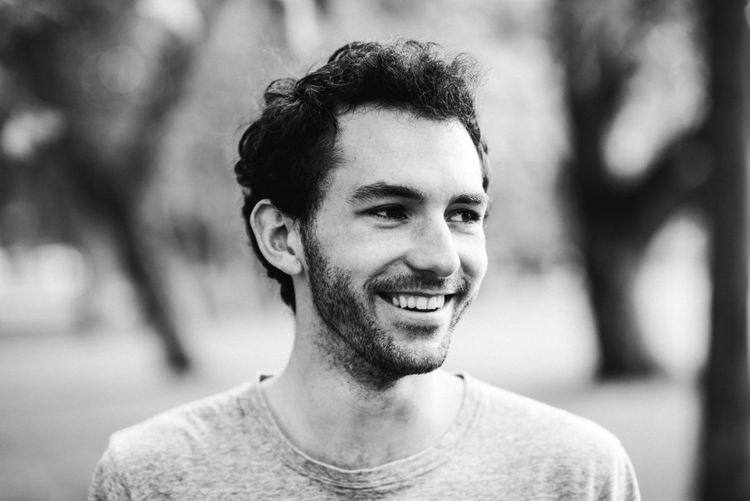 Track of the Week: 'Northern Merry’ by Dan Shake

Lets get into the groove with Dan Shake, first putting in the blues organ before diving headlong into the deep, dark beat of the underground club. In the background we get the soul of the church coming through, with them really coming to the fore when the beat is stripped for a moment around the minute mark, singing that she sees Your face around, with that beautiful raspy voice that brings the flavor out full throttle. In the meantime Dan Shake keeps the track rolling, with the beat, with the percussion, and by shifting the vocals front and back, sometimes putting emphasis on that emotional punch, and at other times letting it slide down in the mix to make sure we reload on the rhythm of the tune. At about the 3:30 we get some idiosyncratic drums in there, taking over momentarily, but soon it gets shooed back down again by the main beat and the vocals. Love the ending as well, it’s like an outtake reel at the end of a film.

Gilles Peterson puts the rumba in with this Latin vibed track, including lots of those characteristic sounds and loads of percussion. But also, a beat, which enters around 35 seconds in. Sure, one that fits the vibe, with the drums and the toms helping out there, but it definitely also makes sure it is in tune with the dancefloor. And you can leave that in the safe hands of Motor City Drum Ensemble, who is pretty awesome and knows how to get something out of this material (or, like, anything). So the percussion makes sure the rhythm keeps going, with on top of that some nice auxiliary sounds. The deeper percussion elements are dialled down a bit before the three minute mark, just to let the flavor come to the fore some, slowing it way (waaay) down for a near two minutes or so. Slowly, you can already hear some percussion elements with the cymbals and stuff, which is the prelude to the beat and rhythm to come back in. At the end you even get some soft vocal work (and sinister laughing) on top of mainly the beat. The mix is super smooth, super organic, and will let you get some of that hip action in.

Shit Robot is back in action, immediately doing that menacing thing with a dark synth sound and a deep beat, just to make sure that you know that you better start moving or he’s coming for ya. Love the percussion added at about the thirty second mark, a bit lighter than the main beat sound, giving it a nice balance. At the minute mark the bass sound comes in, providing some extra deep rhythm to hang your hat onto. The song really opens up with the keys coming in at 1:30, aided by an extra auxiliary sound. Still there is plenty of that hypnotic dance rhythm going on (so don’t you worry my sweetie!), but the lighter keys balance it out without having to hand in some of the rhythm for that. So this one keeps on grooving just so you can keep on moving, with that deep sound and quick pace. Shit Robot keeps the synths working for atmosphere though, upping them just before the fourth minute mark as a prelude to dial it all down in terms of the rhythm, though all of it comes back shortly after, including some “uh”s being yelped by some guy or another. A nice banger of a dance tune from the DFA label.

How about some of that nice disco & funk eh? Aaron Neville’s track ‘Hercules’ gets a Dr. Packer rework, upping the pace but keeping the funk, for all your dancing pleasure. So there’s a nice beat going on, some extra percussion to give it an additional boost, and the bass that runs right on through it to give you all that dancing. After the minute mark you get the piano, already giving it a bit of that disco party feel. And on that score Dr. Packer holds no punches, making sure there’s plenty of stuff to work with as a disco dancer. He turns it all down for a few seconds to introduce the vocals, which then get to work with the rhythm and all the other things there. Bit of organ, bit of guitar, and what seems like the girls in the back doing some “doo-do-doo-do” lines. He plays around with pace a bit, like the transition just before the three minute mark, which is quite splendid. The vocals have a nice funky rhythm to it, singing that, well, It must be Hercules (who else?). Add some horns in there as well, and you’ve got the whole dancefloor disco bonanza, which Dr. Packer knows how to bring like no other.

Super lush start for this one, with YSE making sure the start is super mellow before the soft paced beat comes in on top of some tropical percussion and the main sound that he makes sure to keep right there. Then the deep vocals arrive, contrasting the somewhat lighter main sound. Second time ‘round that the voice tells his tale some extra percussion is added back in there as well, another way to contrast that deep male storyline, which gets some echo and less rhythm accompaniment during the chorus, singing that he will Give myself to you. In the mean time the tropical percussion, beat, and that core riff keep it working, making sure that, Yes, it is not at a breakneck pace but, also Yes, you can still do a little dance to it. YSE manages to keep that feel from the start there for the entirety of the track, whilst also making sure to at least get some rhythm in up until the very end, where the percussion helps the main sound to ride it out until the last half minute or so, where it closes the song out all on its own.

Paradis always manages to make something sound so effortlessly good (and with a suave French New Wave vibe as well). Here they take on a track by Alain Chamfort, a track which happens to also be called ‘Paradis’, just to get some of that optimal confusion running in there. The first synth sounds around the 15 second mark that come on top of the percussion, that is just magic, and then the vocals of Chamfort slide in, singing something I don’t quite understand (because, French). At about the minute mark they turn up the volume a bit and get a beat going for your dancing pleasure, being helped out by some extra rhythm riffs. The synth, meanwhile, still helps the vocals out with creating the atmosphere. The tone of the vocals provide a nice contrast with the more paced beat that keeps the track moving forward, and that beat in itself is laced with loads of sounds to wrap it all in. At about the halfway mark the vocals are allowed to rest for a minute, with Paradis coming up with a nice little sound as placeholder. It is one of those dance-with-your-eyes-closed-while-dreaming-away tracks, and just of that impeccable Paradis quality again.

The Brighton-based duo of Tobin Prinz and Suzi Horn make up the impressive Prinzhorn Dance School. In 2008 the band released their self-titled debut album on DFA Records, the same label that is releasing their new album, Home Economics, an album which was played and recorded on the move, giving each of the tracks a unique minimalism and a sense of being right there with the artists when listening to each song.

The opening track ‘Reign’ is a masterpiece in rhythm and what can be created with understated backing and elegantly chosen lyrics. A showcase of what is to come in the rest of the album. The track that follows uses the drums to add symbolism and effect to the lyrics and the ‘Battlefield’ instead of just holding down the beat, and closes with a long instrumental setting it apart from both the tracks before and after. ‘Clean’ is different again with all vocals sung by both Prinz and Horn with a great melody and a track that makes you want to listen to every other on the album. The final songs are lyrically brilliant with strong stories behind the words with excellent placement and timing. The best line across the six tracks: “I’m scratching at pieces, of a love that won’t rewind, will not be deleted” coming from the final track ‘Let Me Go’.

Prinzhorn Dance School have many skills in their arsenal, which they use to great effect throughout the album. Every sound is only used if needed and is perfectly chosen to fit the song, and enhance the lyrics and style, which makes the record pure and never overstated.

The use of different combinations of vocals from spoken, to duet and solo gives the listener something different from one song to the next, however Prinzhorn Dance School never hide behind the vocals and ensure that the style fits with each song and is well crafted.

The album’s choice of songs and their positioning are part of its charm from the beautiful harmonies found at the start in ‘Reign’, to the poetry put to music in ‘Haggle’, and wrapping up with the heartfelt ‘Let Me Go’. Home Economics is a stripped back showcase of musicality and originality with the ability to make you feel great just by listening.

Home Economics is available from Amazon and iTunes.