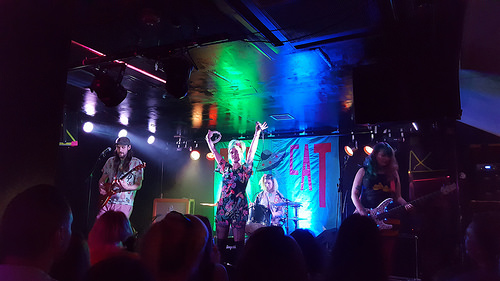 I was ecstatic about attending this gig, Tacocat have been known to put on an awesome show and had recently become my favourite band when I reviewed their new album Lost Time (here). Interviewing the band beforehand was a great privilege and by the end of it I couldn’t wait to see them get up on stage.

The first support band was Thrash-Pop solo act, Garden Of Elks. He referred to himself as us and we, making me think that there were other members of the band that couldn’t make it so he had to make do with a backing track and loop pedal. It soon became apparent that Garden Of Elks really was just this one guy which was rather impressive. Although he wouldn’t have been my choice as support for this gig, he was talented with a good voice and definitely had a way with the crowd though I never managed to catch any of the song names.

Up next were Girls Rock School graduates Tongue Trap with their own brand of Riot Grrrl tinged grunge-rock. Previously called Taco Tuesday, they have a theme song of the same name which they still play. It’s obvious there are some fans in the house as you can hear a few people singing along to the chorus “It’s taco Tuesday and it’s all you can eat!” with great enthusiasm. Guitarist Kim and bassist Emma’s voices have a Jessicka Addams quality to them; both have great range and can go from super light vocals to raging screams in a split second.

Their vocal abilities are shown of well again on their cover of 'Oblivion' by Grimes which I think could arguably be better than the real thing. Announcing that they chose to cover this song because of the content (sexual assault) and their belief that this is an important issue that should be discussed, the audience obviously agrees. It’s not surprising that they have connected with them so quickly; their stage presence is subtle yet engaging and drummer Sam’s deadpan voice has everyone on the floor.

Their next song, 'Celery', is a total tune guaranteed to stick in your head for days. As they sing the verses, it’s as if they are having to hold themselves back before they get to the chorus and go full on with their voices. It has a great '90s sound to it that seems to carry through their other songs especially 'Breath' with its long and low grungy melody. As Kim sings “Save your breath there’s nothing left” I am drawn to thinking of Buffy and the underage night club, The Bronze, that for some reason always had really good bands on. I can’t help but think this song would have been perfect for that show.

As their time on stage draws to a close, Tongue Trap bust out two of their more rage fuelled tunes the first of which is 'Butt Plug'. Usually dedicated to someone who has recently been a prick, tonight the honour goes to Kim’s homophobic flat mate and as the final scream of “you need a butt plug!” ends, the crowd going a bit mental.

The big finisher is their signature song, 'Period Pants', which was written during the time of protest over the tampon tax. Now that’s over, Kim says, this is their victory song instead. An obvious favourite of the fans in the house, there is practically a pit happening at the front of the stage as Sam batters the drums and Kim and Emma smile at each other knowingly. In the final chorus, Kim discards her skirt and they both chant “I’ve got my period pants!” as Kim lifts her guitar to reveal blood stained underwear; punk as fuck in every way. These girls are going to go far.

As Tacocat finally take to the stage, you can tell that the excitement of having a band like this play in Edinburgh is a bit overwhelming yet also a hopeful sign that the music scene is picking up. Colourful as ever, everything about Tacocat makes you feel like you are in for a great night and they put on a hell of a show.

After the great cat based show opener, 'Cat Fancy', the first track played from their new album is the brilliantly angry 'FDP', short for first day of your period. The crowd is obviously made up of already loyal fans as they need no direction to start chanting ”FDP don’t fuck with me!” when the opportunity arises. Moving on to one of the favourites from their last album NVM, 'Bridge To Hawaii' brings the last few stragglers to the dance floor as the show really starts to get going. Tacocat are clearly adored by the crowd and the atmosphere of that seems to fuel their energy on stage. It’s at this point that I notice the absolute beauty that is Bree’s bass guitar; white and covered in sparkling gems and blue lights, it matches the bands aesthetic to a god damn tee.

As Emily introduces 'Dana Katherine Scully', you can tell that this is the song the audience have all been waiting for. A catchy and brilliantly written homage to the intrepid detective herself, it has a great sing along quality and the way that Emily’s voice carries the melody is entrancing. Behind her Lelah is giving it her all on the kit, especially on the bridge where she has a huge smile on her face, eyes closed. It’s a joy to see someone enjoy themselves so much on stage; she brings a whole other level of happiness to this already positive band.

'Talk', the latest single from Lost Time which has just had its own neon dream music video released has a slightly less bright sound to it. The work of producer Erik Blood, who helped them to hone this slightly darker tone, is apparent more here than on any other track. As the audience start to move wildly, Emily sways in time with her tambourine like a '60s folk singer dancing at Glastonbury; elegant and spacey.

Feminist favourites 'Crimson Wave' and 'Hey Girl' turn the room in to a surf-punk-pop frenzy dance hall and as they finish their last song, 'I Hate The Weekend', the audience begs them not to go. In a surprisingly polite attempt at an encore they shout “one more tune, one more tune!” Bree announces that she thinks this is pretty much the cutest thing she’s ever heard as they head back on stage to play us out with a much older song I was unable to catch the name of.

A brilliant band on and off stage and an absolute joy to talk to, Tacocat deserve the fortune that this international tour will bring them and I can’t wait to catch them performing again soon.