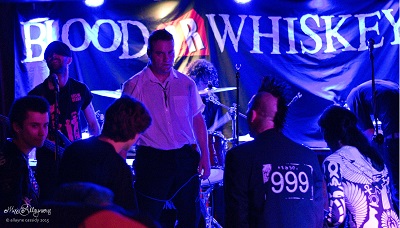 While the rest of the country is watching Ireland trounce Canada in the rugby. Fibbers is hosting a daytime, all ages show in its darkest of dark basements. Punk veterans Blood or Whiskey are the main attraction. The main support act is four teenagers from Dublin, The Klares. They've just won the Schools Award in The Big Break 2015 and are heavily influenced by the Arctic Monkeys and Catfish & the Bottlemen.

They have impressive stage presence and play well together. They have a real future in music, once they finish school of course. The newer material from new EP, Cookoo, is more sophisticated without sacrificing what makes them great in the first place. The Klares play a mix of originals from their two EPs and classic rock covers from The Who, The Undertones, and The Black Keys.

Lead singer Andy Burke dances around wildly and gees up the young crowd in front of the stage. The older crowd at the back look suitably enamoured by the tight, up-tempo pop rock and are visibly impressed by the storming interpretation of 'Voodoo Chile' that closes the set. It's a brave move to finish with a Jimi Hendrix cover but The Klares pull it off with panache, put a modern twist on it, and make the song their own.  The audience demand an encore and the headliners graciously shout encouragement to the youngsters. They have used all their original material so finish up with perennial crowd- pleaser 'Twist and Shout'.

Celtic punk veterans Blood Or Whiskey follow in the headline slot. Originally formed in 1992, the Dublin based sextet have been there and done it. 2005's album Cashed Out On Culture is rightfully regarded as a punk classic. They've toured the world with fellow trad lovers Dropkick Murphys and Flogging Molly, with the added touch of authenticity that comes from actually bring Irish.

Their brand of catchy, melodic, good time songs with call and response choruses blends seamlessly with their aggressive undertones and socio-political messages. The usual punk set up of guitars, bass and drums is augmented with banjo, accordion and tin whistle which both modernises the sound of trad music, and keeps true to the rebellious spirit it evokes.

From the off, it is clear that these guys are head and shoulders above almost every band in Dublin in terms of stage presence. They are at ease on stage, masters of their domain, and they carry the crowd with them every step of the way. They back up their amiable swagger with quality tunes which also say something about modern life and the world we inhabit. Blood or Whiskey describe themselves as The Dubliners being played by The Clash. They have a small army of hardcore fans, one of whom states that this is the band Shane MacGowan wishes he was in.

From the first chord, skinheads are slamming and mohawks are pogoing.  It's a fun and exhilarating alternative to sitting in a crowded beer garden watching overgrown, overpaid men push each other round. Or, at least, the uniforms are more interesting. 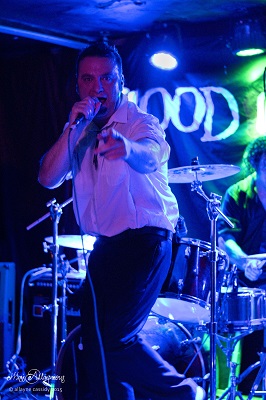 The all ages gig means a wide age range. From young lads with hair swept across their faces to weather-beaten punkers in Doc Martens and cut off denim, there’s a sense of camaraderie that only the proximity to consensual acts of mild violence can inspire. There’s a girl in a black and white dress standing stock still, front row centre like the gothic eye of the storm as the pit rages.

Blood or Whiskey are consummate entertainers without getting twee or clichéd. The charismatic lead singer, Finny McConnell,  gets down into the crowd on a number of occasions to lead the dancing, twirling his mic stand like Freddie Mercury leading a band of majorettes.

The energy levels ramp up further when a bunch of red balloons are introduced to the dance floor bringing the already bubbling dancefloor to the boil. The floor is all spilled beer and broken glass and the band slow things down as the staff mop things up. ‘Back Home in Derry’ always sends shivers down the spine but Finny tempers the maudlin lyrics by taking a  dance partner from the crowd and leading her around the floor. The skins and punkers join in and the scene resembles a Terry Gilliam fever dream.

Blood or Whiskey remain a vital and fun live act. Even if you are new to them, they would win over all comers. And with singalong songs like ‘They Say No’ and ‘Poxy Pub’ I would defy anyone to resist them.