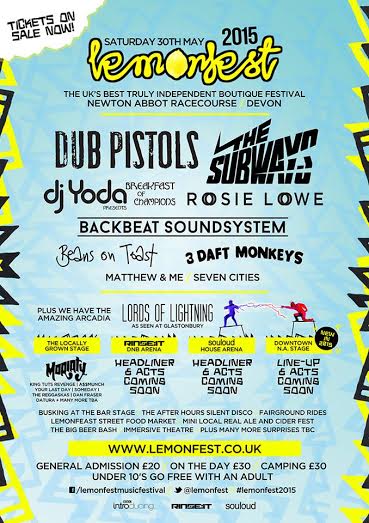 First up and foremost is UK indie rock outfit The Subways who have played and headlined major festivals all over the globe. Other new acts include: Devonshire native Rosie Lowe, Cornish Reggae rockers and festival favourites Backbeat Soundsystem and filthy-indie-blues duo Moriaty will headline the Locally Grown Stage, which will also feature Newton Abbot's own Reggeaskas.

Organiser Matt Freemantle, says; "We are over the moon to have booked these acts and secure our strongest line-up yet. The addition of Lords of Lightning is a very exciting one for us too, and will provide an immense spectacle for those who manage to catch them on the day. We will continue striving towards our ambition of putting on the UKs best boutique festival."

The newly announced acts will be joining DJ Yoda, Dub Pistols, Beans on Toast, and Matthew & Me at Newton Abbot Racecourse on Saturday May 30.

For more information and the complete line-up go to the festival website now.

More in this category: « New Track and Tour Dates From Rhodes Beaches Brew 2015 - Final Acts Confirmed »
Login to post comments
back to top