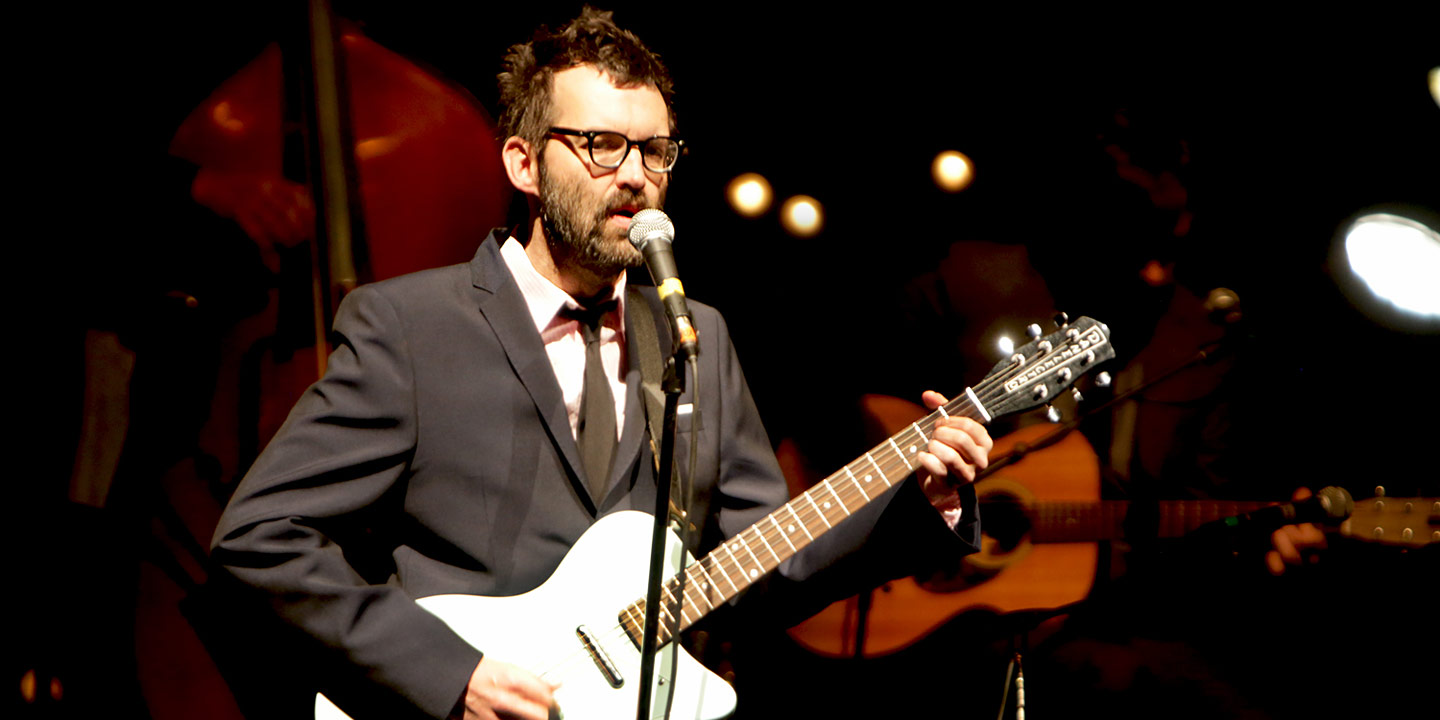 Tonight feels like a particularly special night, the sun has been beating down upon the banks of the Tyne all day and The Sage, Gateshead is like a greenhouse. We’re in early to take advantage of the air conditioning, and obviously benefit from tonight’s support that takes the form of the Daughters Of Davis. The two sisters sing the sweetest songs, an almost complete contrast to Eels.

They do inject a bit of humility into proceedings, the fact that they live in their van is a good one to start with. Obviously living in rather close quarters with your sibling brings its on dilemmas, however it's nothing a water pistol can’t sort out for these two ladies. A valuable life lesson learnt on our part, and we’ll be rushing out to buy water pistols at the next opportunity.

So having cooled off, we warm back up in the bar before taking our seats and awaiting the arrival of Eels. Looking rather dapper the band take to the stage and open up with new track ‘Where I’m At,’ heading in straight into a cover of ‘When You Wish Upon A Star.’ Setting a rather tepid pace for the beginning of the evening with E taunting the crowd asking if they’re feeling bummed out?

He continues this theme throughout the early part of the set with tracks like ‘Parallels’ and ‘A Line In The Dirt,’ which to be fair, truly is ‘bummer’ rock at its absolute best. Just as we’re feeling pretty bummed out, E turns to the band and asks what day it is, claiming he’s playing a Tuesday show and not a Saturday show.

With that, the band pick the pace up. ‘Fresh Feeling’ provokes a rousing reaction by an incredibly attentive crowd. However, the stand out track comes next in the form of the brilliant ‘I Like Birds’ the crowd yelling "BIRDS" at every opportunity. The previously sedate set, with its interspersed humour, has been truly set alight.  Don’t get us wrong though, we're happy with the bummer rock, but the slightly heavier yet still soft rock is a welcome addition.

‘Mistakes Of My Youth’ is arguably one of the stand out tracks from new LP The Cautionary Tales of Mark Oliver Everett, and it is met with a well deserved reception. Eels finish where they started with ‘Where I’m Going,’ and as the band attempt to leave the stage, the crowd really do go wild prompting the band to remain and play ‘Fucker’ among others.

Eventually they leave the stage, but by this point the crowd aren’t going anywhere. The band return to the stage more mischievous than ever. Even allowing the infamous ‘Chet guy’ up on stage to meet his idol. The band finally settle to play a cover of Elvis’ ‘I Can’t Help Falling In Love With You,’ a perfect end to what was a beautiful evening.

Tonight was brilliant, the ever eccentric E, thrilled us with his performance. Some may see E’s delivery as somewhat ostentatious, but this evening he looks as if he’s having a truly fantastic time. It may be because the band are running on adrenaline, this being the second to last show of the tour. That said however, they play like its their first.