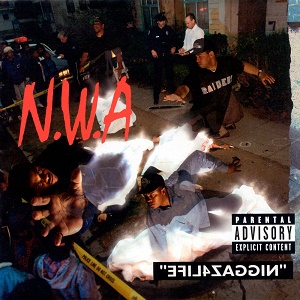 With their Back to Black series, USM has managed to encapsulate the spirit of hip-hop through reissuing a handful of classic releases that span the genre's life. From the likes of 50 Cent and Common, right down to scene pioneers in the forms of LL Cool J or NWA, the series offers a brief outline of a musical movement, but deeper insight in to the record's that made it, and the records that might otherwise have gone overlooked by younger fans of the genre.

My second and final review of the series, is the the second record from the aforementioned NWA, Efyl4zaggin. Nowhere near as well-known as their official debut, Straight Outta Compton, Efyl4zaggin marks the departure of Ice Cube from the group, and as a result sees several very definite changes in their approach. Not all of them positive. One which is however, is the vast improvement in Dr Dre's production, as if this was him laying the foundations for his future solo releases.

When Straight Outta Compton dropped in '88, it was a game-changer, one which spawned that many imitations, that when the time came for record number two, Dre changed it up again, this time through the introduction of darker, seemingly more fractured beats than anything that had been seen previously, something which is perhaps most evident on the record's first half, in tracks such as 'Appetite for Destruction'. It's an interesting step-up from its predecessor, one which matches the violent themes of the record perfectly, but herein lies one of the record's inherent issues also: the themes.

With Ice Cube's departure, so too departed the politically concious lyricism, at least for the most part. In their place instead, are the hyper-violent, and massively misogynistic narratives that populated rap through the most part of the '90s. Proving, if nothing else, that for better or worse Dre has always been a taste-maker, behind a microphone as much as mixing desk. It isn't just the Dr Dre show however, Eazy-E has his fair share of air time, particularly on the likes of 'Approach to Danger' or the aforementioned 'Appetite for Destruction' whilst the lack of Cube also allows MC Ren much more time on the mic than before, it's just a shame that much of the second half is filled with blatant, pointless misogyny, with tracks like 'Findum, Fuckum and Flee' or 'She Swallowed It' feeling more like they're for white middle-class teens to rebel with, rather than making any sort of comment, at least in this day and age.

In hindsight, Efyl4zaggin is a record that is ultimately a product of its time, and when viewed out of context appears almost a caricature of the genre it paved the way for. That said however, it's a milestone record that marks the splitting of hip-hop in to two very different camps: that which was interested in politics and social conciousness, and that which was interested in 'guns, bitches and bling'. And though it easily falls in to the latter category, it's hard to dismiss the craftsmanship of Dre's production throughout. And all without even a hint of over-priced headphones.

More in this category: « Common - Like Water For Chocolate Small Faces - The Decca Years (1965-1967) »
Login to post comments
back to top