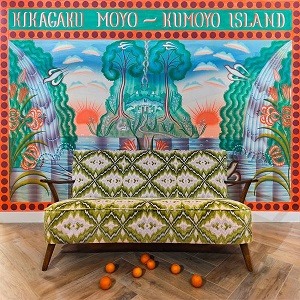 I ain't ever been to Japan, friends. I think it would be a cool experience and a culture shock, for real, though.  While only knowing a handful of their customs and practices from television shows and various media, it's obvious to take them with a grain of salt, because getting a true Japanese culture walk-through can only be experienced first-hand.  You must be thinking, “Johnno! You only want to see where they filmed Takeshi's Castle, the place used for Most Extreme Elimination Challenge?”  And to that, I say “No shit Sherlock, who wouldn't?!” But aside from game show absurdity of the physical, my mind got a mental walkabout through Japanese side streets and countryside via Kikagaku Moyo's latest album, Kumoyo Island.

The album's opening track, ‘Monaka’, is the soundtrack to a spaghetti western in the Miller/Lord Lego movie style with surprise splashes of sitar doubled on vocals.  In this dumb cranium of mine, I can't help but think of Fozzie Bear taking the lead in such a film, which ultimately takes us on an adventure to its final moment.

Into the second song, ‘Dancing Blue’ harkens backs to a post-disco cop drama that switches gears.  Whereas North American television audiences would be exposed to the gun-wielding intensity of big city police forces, this song reflects the sensitivity and intellectual side of law enforcement.  Using intuitive measures, working with people, and embracing the flow of situations, and situational awareness.

‘Effe’ is an instrumental break with intermittent acoustic leads, paired with the recurring sitar friend and fake bird tweets that pair nicely with the rising sun arpeggios of ‘Meu Mar’ (‘My Sea’,for the English-minded), reminiscent of Radiohead's ‘Weird Fishes’.  With the song's flute ending, tremolo guitar and marimba, us listeners are cozied into an inflatable raft, gently traveling on abnormal waves for our return to land. Ahhhhhh....

I could go on, each track standing with its own landscape and specialized mise-en-scene for focusing on the weary travels of a walker on the eastern Asian island.

This album has an overall cinematic style that effortlessly transitions from one vibe to another, that focuses on the “whole” of the album, rather than a few catchy singles and filler to take up space on Spotify's servers.  While my brain has the absence of knowledge of the Japanese language, the album can offer a hand-holding walk around.  And yes, I did feel like that traveler, traipsing across Japanese luscious regions, getting a feel for every town and village, and speaking to the locals... and not ever understanding one fucking word.

More in this category: « The Hanging Stars - Hollow Heart (Album Review)
Login to post comments
back to top