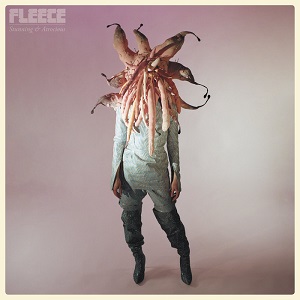 Defining what genre a band falls under can vary between immediately recognizable or "I'm gonna need some hyphens". It seems as if lately there is much more crossover than previous generations, which is a good thing. Nu-metal was a crossover that worked only briefly until it played itself out quickly and proved that combining too many polar sounds can only last so long. Hence, some bands overstay their welcome. Some bands come at the right time and reflect what is prominent within the zeitgeist.

Enter Montréal's Fleece. A psych-pop quartet with recognition amongst the LGBTQ community, adorning music with light, clean touches and vocal styles fusing David Bowie's airy pirouettes and Feist's flourishes. What is noticeable right away is the melding of the modern and the classic. They don't just combine genres effortlessly, but combine the best of time periods, modern ‘00s and late ‘70s come to mind.

Fleece's latest, 14-song LP, Stunning & Atrocious, kicks into ‘All My Money', a track reminiscent of early Portugal. ‘The Man’, splitting vibes into swirling soundscapes and shoegaze. Singer Matt Rogers informs us that he's "got boys on the mind" in the track 'Upside Down'.  The longing for intimacy mirrors that of the traditional, heterosexual nature of popular music, but the sincerity (as opposed to intense proclamations) for what he's putting down is getting picked up.

His crooning delivery balances with synth player, Megan Ennenberg's on the track 'Something Real' over the weightlessness of relaxing waves, post-surfing.  The changes that switch through their songs will remind you of Wings (and of that ‘70s influence), and display compositional prowess with said changes feeling unwarranted and faintly abrupt, like pulling out a facial tissue.

Even as light as the music becomes, the brief pauses and rests still retain this listener's attention like in 'Love Song For The Haters'. All in all, Stunning & Atrocious is a modern take on good pop music. The overall vibe is very much indie, yet commercially viable as it is catchy and pleasing to the ears.  If ad agencies can take current radio friendly songs and use them in marketing, the same can be said for Fleece's latest efforts within the independent business world and their media sphere.