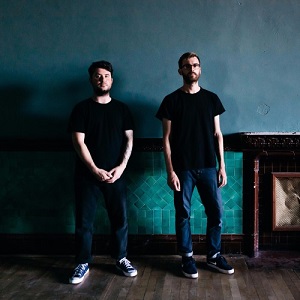 Wait! Wait, wait, wait... hold up. Their name is just "JOHN"? But that's MY name, so they've already begun pandering to our commonality. Pay heed all other Johns out there, this duo is trying to rope you in. Which suffice to say, they do pretty well out of the gate.

Even though John are a two-piece, there will be the obvious comparisons to other two-piece predecessors like The White Stripes and The Black Keys, but fortunately for John Newton (drums, lead vocals) and Johnny Healey (guitars, backing vocals), their sound feels grounded in their predecessor's geographic roots, rather than the blues-based go-to sound for minimalist, vintage rock.

John's latest single, ‘Non-Essential Hymn’ summons the dark and grittiness of classic Detroit rock of The Stooges to the vast dissonance found in the depths of London's underground travel. Will the two Johns set themselves up for a guerrilla-style show in the dark corners of abandoned subway stations? Seems only fitting.

Another ripper from Nocturnal Manoeuvres that'll be added to any playlist (screw it, put it in your prog country or discocore shuffles) is "A Song for Those Who Speed In Built-Up Areas". Get in and shut up because the two Johns have hijacked a '71 Barracuda. No time to explain; but yes, those are bullet holes; and no, they came with the car. We're speeding back to the underground, back to the (typically) vacant passages. Newton is on the megaphone, shouting thick, gravelly proclamations to passers-by. It's only essential. It's only a part of the charm of John. And if you don't recognize it, it's your fault. Dearest listener, be very aware of the aural space these guys put out. It's there from the music they make as opposed to the notion they could add more instruments to fill in such viable space. Newton and Healey have plenty of pulsating sets thumping around the UK and Europe this year and early 2022. Check their socials.