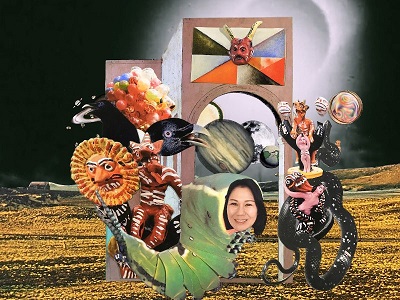 When David Byrne crossed his version of art rock to palatable, more easily consumed ‘80s post punk, he surely had sonic leftovers that were too melodically extreme to work with, to expand on, and produce. They weren't ready for our ears and over time, those lines meandered through voids until they landed in Deerhoof writing sessions.

The seemingly sounding finger exercises for guitar are honed and doubled, portrayed in their latest single, ‘Department of Corrections’ from the band's latest release, Actually, You Can. A firm and positively-named album title for these darker, uncertain times, steeps the listener in Deerhoof's world of music born from art school canvasses rather than a suburban basement or car-hole. This is the furthest thing from your neighborhood bar band. This is music meant for a metropolitan gallery's grand opening, displaying the new wave of avant-garde up-and-comers.  Live sets bounce of white walls, jagged, and with rhythms reminiscent of the randomness of car horns.

The experimental nature suits the night, as the seriousness of the surrounded art can turn patrons' judgemental and critique-laden faces at ease with singer Satomi Matsuzaki's playful vocals and lo-fi bass duties. Greg Saunier provides the respectable drum lines and fills, playing less straight beats, but complimenting the angular and sporadically-noted dual guitar parts of John Dieterich and Ed Rodriguez.

Though Deerhoof offers upbeat aural fixations, they counter the music with titles aptly named ‘Scarcity Is Manufactured’, ‘Plant Thief’ and ‘Be Unbarred, O Ye Gates Of Hell’; all of which pay homage to the San Francisco quartet's noise and punk roots, but still able to push into fresh and vibrantly green territory.  Rodriguez drew upon his personal struggle of identity between his Mexican heritage while identifying as an American. That struggle and tension is real, especially in the music. The duality between what was, what is known on the surface, and perceptions can create a unique listening experience with Actually, You Can, minus any heavy handedness, where its subtlety could be transmuted upon a gallery's grand opening white walls.

More in this category: « Captain Rico & The Ghost Band - The Forgotten Memory of the Beaches (Album review) John – Nocturnal Manoeuvres (Album Review) »
Login to post comments
back to top