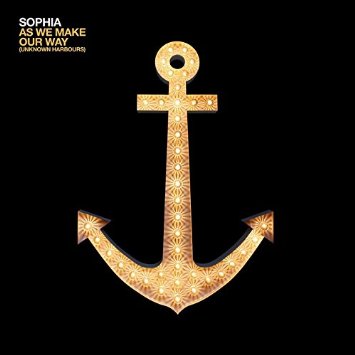 Back in 2004 I bought Sophia's People Are Like Seasons album, played it a few times and then largely forgot about the band (or, rather, the collective), at least to the extent of keeping an eye open for new material. Their performance at last year's Incubate Festival was therefore my first contact with them in all that time. That was a good show so how do they shape up on record in the present day?

As We Make Our Way (Unknown Harbours) starts off with the Nymanesque piano piece 'Unknown Harbours'. Relatively moody but not something that pushes any emotional buttons.

The expected anthemic sound is forthcoming on 'Resisting', at least early on and then again from around the three minute point. If you're unfamiliar with the Sophia sound then British Sea Power are, at times, a reasonable comparison.

Quieter, slower songs are though the order of the day for the most part in the album's first half, despite the promise track two makes. Not until the melancholic sunshine provided by 'California' does the pace of proceedings pick up once again. It's a clever song, giving you as it does the sound of vitamin D-induced cheer with lyrics focussing on facts that are less happy. That it feels a minute or so too short just adds to its impact.

'St. Tropez / The Hustle' brings some weighty bass & drums to the fore as it plods along at a decent, head nodding lick. That's not how things progress for the remaining three tracks of the album but, with the mildly gothic edged rock that still has me listening to band leader Robin Proper-Sheppard's Nineties trio The God Machine, 'You Say It's Alright' provides one last yearning and yet comforting four minutes of bliss before things return to being largely acoustic for the closing numbers.

Live in Holland last year Proper-Sheppard & the band were "solidly rocky" with "potent emotion" (according to yours truly) and with five previous albums the option was obviously there to play a set of roof-lifting material, rather than the more intimate stuff that makes up the bulk of As We Make Our Way (Unknown Harbours), particularly as such material was better suited to the concert hall being performed in. There is though something here for everyone, especially a gateway backwards to those earlier releases.

As We Make Our Way (Unknown Harbours) is available from amazon & iTunes.