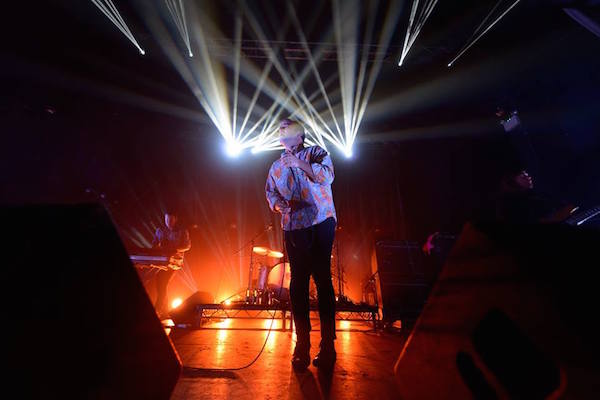 One of the most anticipated shows for quite a while, as Future Islands finally return to Newcastle after rocketing into the public eye some eighteen months ago. Having been at their only previous show in the city this was something of a change up from somewhere that is a tenth of the size to tonight’s Academy show.

However, there are two intriguing support acts to tackle before we have the pleasure of Sam Herring’s dancing, first up is local act Du Blonde although you’d be confused as to her origin due to her wildly different accent. Her set seems to lack any excitement, with her bland tracks all sounding like something we’ve heard all too many times before.

Apart from the die hard few at the front the biggest cheers come as she welcomes Future Islands front man, Sam on to the stage to duet with her. Following on from this lacklustre set, an altogether different prospect takes to the stage and turns everything up to eleven as Dope Body hurtles into view. Whilst many look bemused again a die-hard few at the front are in complete awe of these four guys from Baltimore.

With screamed lyrics and angst-ridden songs they put on an incredible show, and whilst they may or may not turn heads for the right reasons we’re completely amazed by them. All of this though is supplementary as this packed crowd are waiting in anticipation of one of the most entertaining bands around.

As they take to the stage they immediately look taken aback by the rapturous reception, citing their previous show and how this one is a little bigger. In no time at all they lift the entire crowds spirits with some excellent dance moves, and a trio of tracks lifted from Singles. The early highlight being 'A Dream of You and Me', this beautiful synth track is the first of many hands in the air moments that become commonplace in tonight’s set.

Their groovy synth lines coupled with Sam’s one of a kind vocals are truly brilliant, if there was one thing that lets down the evening it is the poor sound in the venue. However, to some extent this is out of the bands control and regardless of this they continue at a blistering pace, as they play tracks from their incredible back catalogue including the considerably darker 'Before The Bridge'.

Whilst it is somewhat darker it still possesses that beautiful synthesised delicacy, that is always present in Future Islands tracks. Similarly there are a plethora of tracks from In Evening Air on show this evening, for us 'An Apology' and the wonderful 'Tin Man' are particular highlights of the evening. Sam’s ever distinctive vocal style is so brilliantly evident on 'An Apology', the way he switches between his normal voice to this almost demonic tone has us captivated by his brilliance.

There’s another highlight in the form of 'Seasons (Waiting on You)', which forms part of a huge singalong and another huge hands in the air moment for this packed crowd. Yet as they return for an encore of some of their finer older works we’re left fawning over Sam’s phenomenal dance moves, and his incessantly humble banter as he proceeds to thank everyone possible.