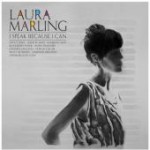 With that attitude in mind, some people are going to be rather surprised by this album; it builds and expands on Laura Marling's range wonderfully. If you only have a passing familiarity with Marling you might be expecting another album of spritely, light folk-pop. This is rather harsh on Alas, I Cannot Swim, as not everything on that sounds quite as jaunty as 'Ghosts' or 'Cross Your Fingers.' It was rightly praised for the song-writing and craft on display even if the addendum “from one so young” was lurking behind it. Well, there will be no age or gender related patronising of Marling in this review.

While her debut was similarly entwined in death, heartache and aching depression, it was a record not of denial or anger, but acceptance. I Speak Because I Can stands up for itself in the face of what's thrown at it. Throughout, bodies are beaten, battered, broken and frail, voices are choked, ignored or have nothing to say - it's better for the characters in Marling's songs to be hidden, lonely, veiled and without a voice. Continuing the numerous references to water in her work there are ripples, sea and rivers as well as plenty of crying and weeping.

Lead single and opening track 'Devil's Spoke' is a slight red herring. The rest of the album isn't as fast paced and 'busy' as this bluesy number which, in spite of its stop-start nature, rattles along at a fair pace. It mixes twanging guitar and playful tablas giving an exotic feel confirmed by the single's Indian set video and the eyebrow-raising lyric, “Ripping off each other's clothes, in a most peculiar way.” A Dylan-esque middle-eight and the occasionally throaty vowel sound remind quickly who we're listening to.

There's a certain amount to be read into the lyrics knowing that Marling was brought up in a small village just outside Reading, then relocating to London. You can best see this with the reworking of 2008 B-side 'Alpha Shallows' and last December's Christmas single 'Goodbye England (Covered In Snow)', the latter detailing a winter walk she took with her father as a child near their house. She notes that even though she is out in the wider world, a part of her will always call it home. There's even a telling lyrical nod to Fleet Foxes' 'White Winter Hymnal' in there as well.  The former is one of the most wordy, urgent lyrics she has delivered, not quite to the exhausting levels that Joanna Newsom reaches on Have One On Me but with  certainly less space than found on Alas... Marling evangelises a grey and mournful town and a "heart worked till it's raw" over pizzicato strings first and later a chanting, harmonised refrain.

The most obvious influences on the record - aside from her contemporaries in the 'nu-folk' community - are Joni Mitchell and Nick Drake. Mitchell can best be detected in 'Rambling Man', a bruised and vulnerable song that tries to shrug worries off, displaying a powerful vocal and stirring banjo led climax. With various members of Mumford & Sons chipping in on the album, it was probably wise to keep the number of hoe-down finishes to a minimum. Indeed she points out "I was who I am" like it's the only thing she can be sure of. Nick Drake's spirit is best evoked on the unaccompanied 'Made by Maid' in not just the folky, picked guitar playing but in Marling's softer, honeyed vocal styling. Words are left to hang two-thirds through the last syllable, bringing to mind 'Which Will' and 'From The Morning', though holding more of the autumnal pleasantness of Bryter Layter than the bleakness of Pink Moon.

Marling declared that she was “honest now, not a shouter” on 'Shine' on her first album, and with that in mind you'll not find much of her relationship with Noah and The Whale front-man Charlie Fink here. Whilst it wasn't exactly played out with Team Marling and Team Fink stickers being given away with Heat, last year's The First Days of Spring was laid bare for all. The only real clear acknowledgment here is another former B-side, 'Blackberry Stone'. Its solitary fiddle is complemented by Marling tellingly singing “I'd be sad that I never held your hand as you were lowered, but I'd understand that the world does what it does” (Noah and The Whale's first album contains the song 'Hold My Hand As I'm Lowered'), and claiming as she bids farewell she is “Laura now, and Laura still.” It also offers one of my favourite lyrical ticks, the title held back until the very last line.

On 'What He Wrote' and the title track, Marling goes light years beyond simply being a 'girl who sings about boys'. On these two audacious songs she uses Ancient Greek myths to frame songs about fidelity, jealousy and feminist iconography. 'I Speak Because I Can' uses the same idea as Margaret Atwood's The Penelopiad, in which we learn of the events of the Odyssey from Odysseus's loyal wife Penelope. Contrasting this theme, and also without the uplifting backing vocals of Marcus Mumford and the chiming of the accompanying guitar, 'What He Wrote' is the darkest thing on the record. It's a ghostly and sombre solo number, which imagines a letter of apology from one of Zeus's paramours to Hera. It also sets out to capture some of the spirit of love letters, be they war-time correspondence or From Abelard to Heloise.

Amongst all this anguish and pain you'd not expect 'No Hope In The Air' to offer much light - and you'd be right. It's a swirling, shimmering almost gothic song, drowning in itself and punctuated with marching drums a powerful, pained vocal, touching on the territory of PJ Harvey on Nick Cave's Murder Ballads. There's some hope though on 'Darkness Descends', ironically the lightest and airiest thing on here. I would suggest it would work as a second single, timed to hit during festival season. It's the most hummable thing here and shows another path we could see Marling travel down in the future. It skips along with the whiff of Crosby, Stills and Young throughout.

With a second 2010 album due around September, maybe containing songs like 'Rebecca', 'Mamma, How I've Far I've Come', 'Is A Hope' or 'Drinking Alone', we can also look forward to more of Marling working with producer Ethan Johns (Ryan Adams, Kings of Leon). He has lent a hand here, adding different instrumentation and giving some variety to these well toured and honed songs, never allowing them to be overpowered and giving them space to breathe.

Marling has stated that the title track felt like a good place to finish working on this album as well as closing it. In that respect it's an end, though considering the leap she has made this time round with her song-writing and subject matter, it'd be unfair to judge I Speak Because I Can against anything other than the finest British singer-songwriters, of any age, working today - it feels like a new morning.

More in this category: « Album Review: Angus and Julia Stone - Down The Way Album Review: Jenny Lewis - Acid Tongue »
Login to post comments
back to top