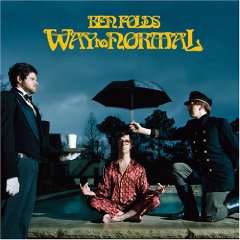 People I know seem to either know exactly who Ben Folds is or they have no idea; nobody has just heard of him or recognises the name. Similarly though very few people profess to love him or his style, it's enjoyable but nobody's favourite. The music he releases has a kind of theatrical piano sound with story-telling lyrics, and in this genre he stands almost alone in popular music. Similarities can be found in Vampire Weekend, Counting Crows and occassionally Death Cab, but his music is as close to this as it is the Bugsy Malone soundtrack. From his first popular foray with Ben Folds Five though, followers have enjoyed finding a style that would see him fit in at Fat Sam's without sounding particularly kitsch: danceable, sing-a-long, fun.

Way To Normal is in no way a departure from this, with a return to the humour that was less obvious on Songs For Silverman; the intro to 'Bitch Went Nuts' for instance is witty and well placed, with the rest of the song providing a good soundtrack to tipsy teenage yellings. The frenetic pace and quick lyirics throughout the album make it a joyful listen, and there is also a great deal of thought applied. Only rarely does the album get carried away and lose itself in the over the top, noodling, key solos. Tales told carry a diverse list of topics, although a variety of heartbreaks appear to be a loose theme, if one were sought.

The album's letdown moment is provided by 'Cologne', a slightly too long ballad which cannot be saved by the strings. It is perhaps unfortunate to be positioned directly after the standout track 'You Don't Know Me', a duet with Regina Spektor which as all brilliant timing, up and down piano pop, exquisitely executed and a perfect employment of their complimentary talents. More please.

It goes a little electronic on 'Free Coffee', a shuffling examination of the ironies of fame that would perhaps be better left as a B-side, before full pomp is resumed on the aforementioned 'Bitch Went Nuts'. This one falls short of brilliance by running out of lyrics towards the end, but maintains the love by swearing at you and running around in your headphones.

The album closes with no real surprises, just more of the same Ben Folds stuff and interesting ideas (quite like to go to Effington, see what all the fuss is about) before ending with a slow-sad one. An album that meets all the upbeat piano pop expectations and has some magnificent moments that will please his legion of supporters no end, potentially adding to it too.

Rate this item
(0 votes)
Tweet
More in this category: « Album Review: Joan As Police Woman - To America Album Review: Funeral For A Friend - Memory And Humanity »
Login to post comments
back to top