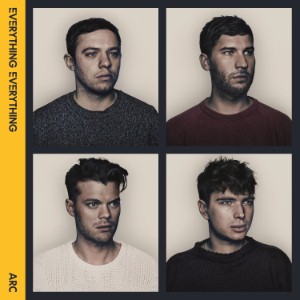 If you are already familiar with Everything Everything this album is all that you would expect from the Manchester quartet. For those who are not accustomed, the band are fantastically tight, well-practised purveyors of angular pop-funk entertainment.

Arc is the follow-up to the Mercury nominated 2010 album Man Alive. Three years on from that their style has matured without compromising their trademark quirkiness. Their awkward time signatures compliment Jonathan Higgs’ rapid fire (sometimes incredibly high pitched) vocals that tie synth, drums and guitar together in a most intriguing fashion. It’s easy to get caught up in the distraction of the complexity of the compositions and at the same time be amazed by how effortlessly they pull the feat off.

Notable tracks include opener and first single ‘Cough Cough’ (nominated for Zane Lowe’s Hottest Track of 2012, whatever that is worth …), a martial tune filled with heavy horns, heavy drums, power & purpose. Another stand-out track, ‘Armourland’, slips and slides effortlessly between the rigidity and sharpness of the synth lead verses, to the smooth boudoir of pleasure that is the chorus.

My only real ‘criticism’ of this album is that it leaves you wanting more. The flow of the record tugs & teases you towards a grand finale, a crescendo, a final masterpiece, but before you know it the moment has passed and the record is over. This is by no means detrimental to the content overall; it just makes you think about where they could go next, and you’re left with a sort of musical cliff-hanger.

Ultimately, this is a very cohesive record produced by a very solid band. Their musicianship is incredibly tight, and the overall quality is unquestionably different to most records available on the market; it contains sufficient breadth of influence and musical dexterity to separate the group from their contemporaries, making them one of the most fascinating bands of our time.

by Everything Everything is available across stores from 14th January, 2013.

More in this category: « Interview: The Golden Virgins - Songs Of Praise Album Review: The Joy Formidable - Wolf's Law »
Login to post comments
back to top