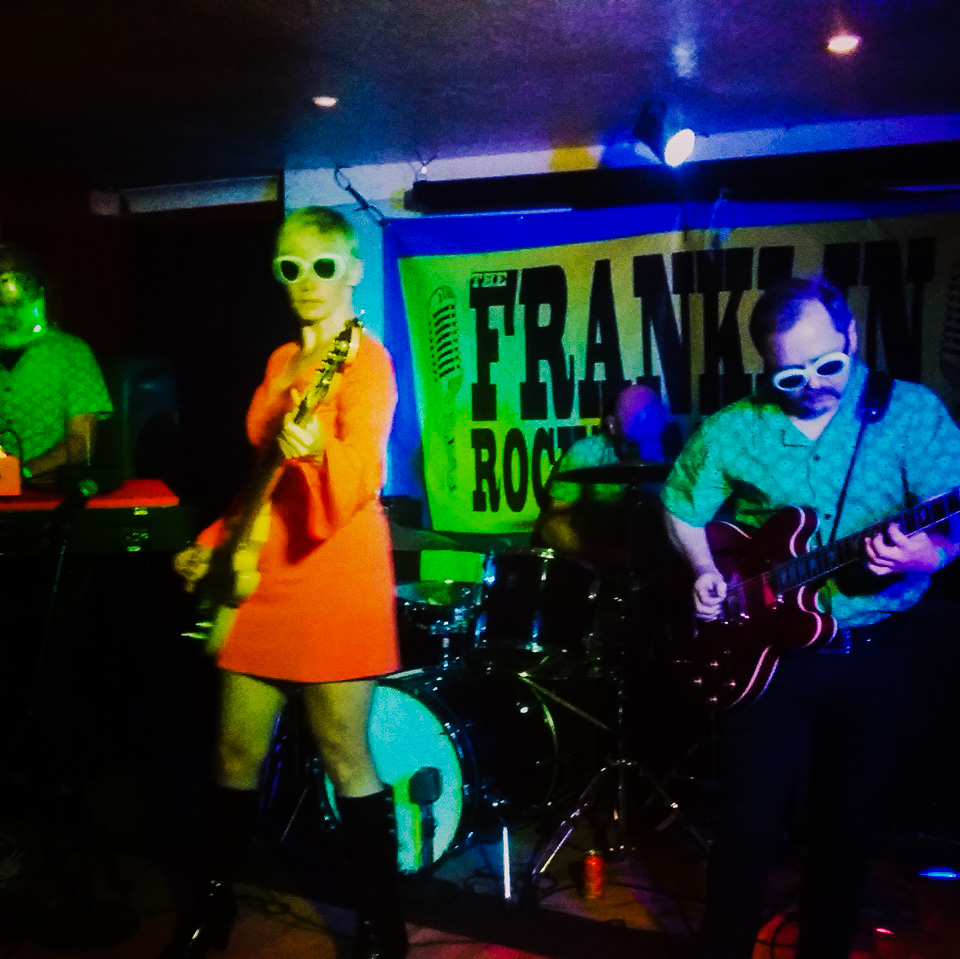 How can Saturday evening possibly get any better than Friday evening I hear you ask? By opening with surf-tastic instro-minstro's The Sine Waves that’s how. One of the bands I was most looking forward to seeing over the weekend. Unfortunately I only managed to catch their last two numbers. But it’s quality, not quantity right? What they did in those 8 minutes or so was utterly captivating. They sound just as good as they look; bassist and 'all systems are go-go' girl from another dimension, Spectrum, tantalises the crowd. They end their set with a corking rendition of The Mummies ‘The Fly’ - good choice. Another goosebumps-y moment courtesy of The Franklin. 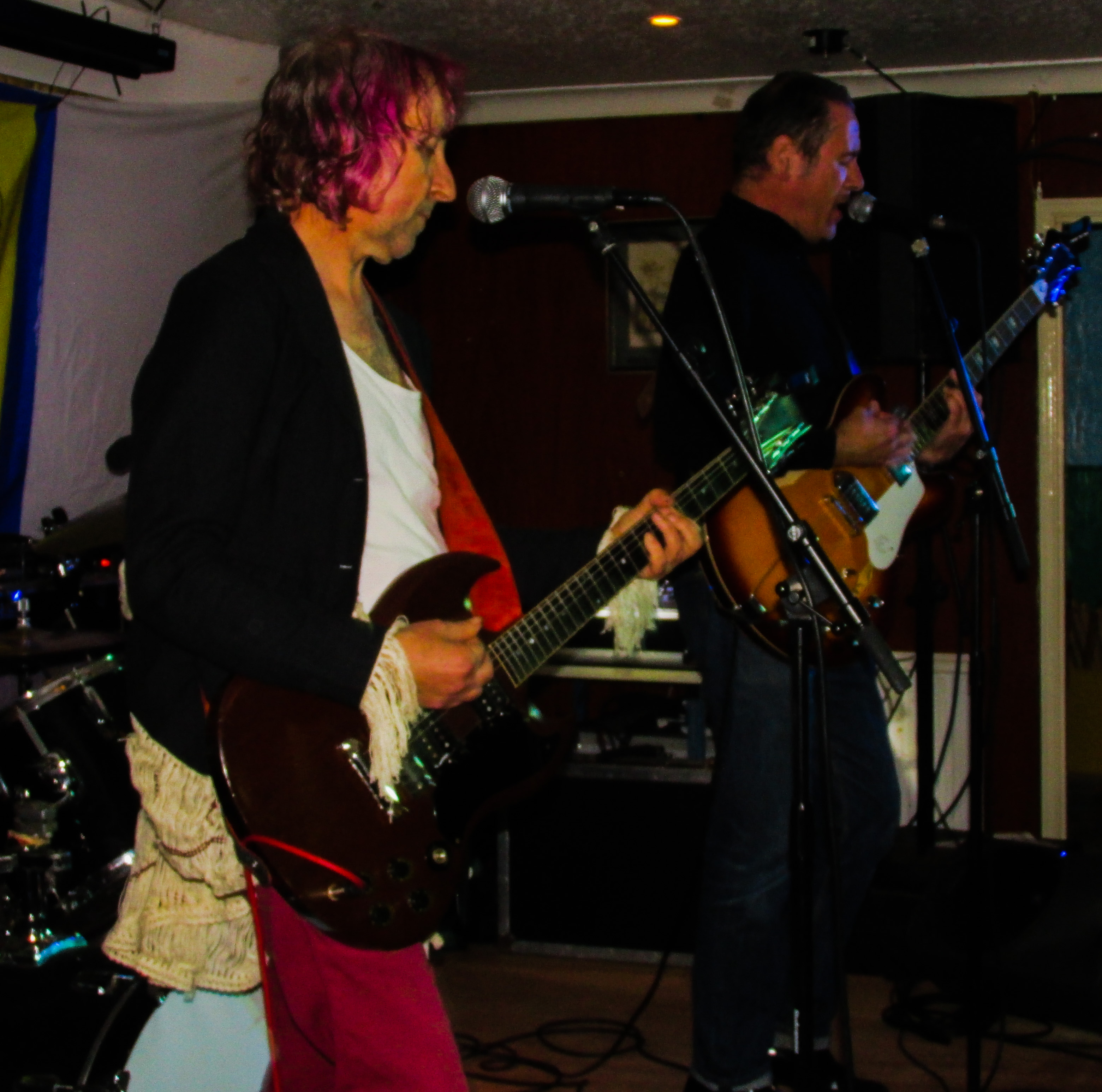 No sooner are Dr Magnus Psyke and his chums off, than Medway three piece, The Mindreaders, are on. We are assured of a certain standard in the form of Russ Wilkins (The Milkshakes, The Wildebeest, Lord Rochester), and possible misdemeanors from the mystery that is Sexton Ming. You may know Ming best for his artwork, and poetic efforts with Billy Childish. We are warned in advance that anything could happen... and there is an air of trepidation as he takes to the stage. Tonight Ming treats us to stopping mid-song to read and answer a text message, later he produces a sizeable kitchen knife from his back pocket and after thinking about it for a short while, promptly discards it (thank goodness say a shrinking audience) and then gets into a mini-tiff with the missus about the phone. it’s both bizarre, and a bit ridiculous; that said Wilkins takes it all in his stride and they play a really good solid set. Mrs Ming, or rather artist and ethereal beauty Ella Guru (latterly of The Voodoo Queens), joins them on bass for their last number, a cover of MC5's ‘Looking At You’. 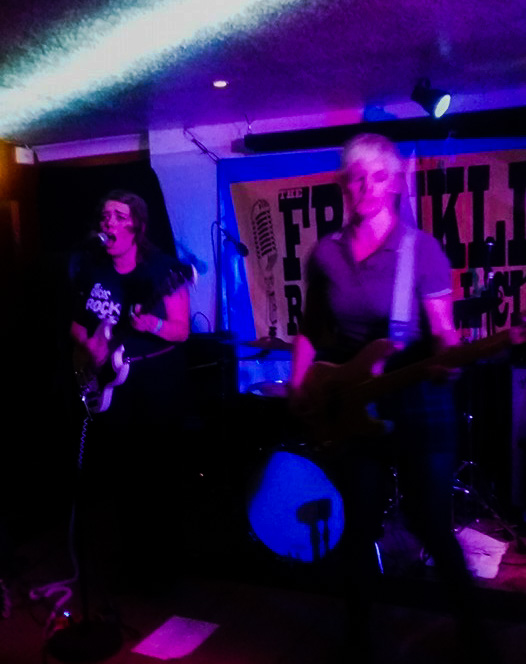 Time for Thee Jezebels - good old-fashioned pub rock ‘n’ roll. Possibly the act that most punters have been waiting for. Their reputation of working and partying hard supersedes them, and they’re definitely up for a lark tonight. They plough through their set in a jovial manner with lots of cheeky banter. When Laura’s and Letty’s guitars are out of tune, they laugh it off and carry on, after a few attempts to manage to get them in sync. Tumultuously turning out tracks from their E.P.’s (released on State Records), and ending with a Wilko Johnson number ‘Going Back Home’. The girls are definitely a crowd favourite. 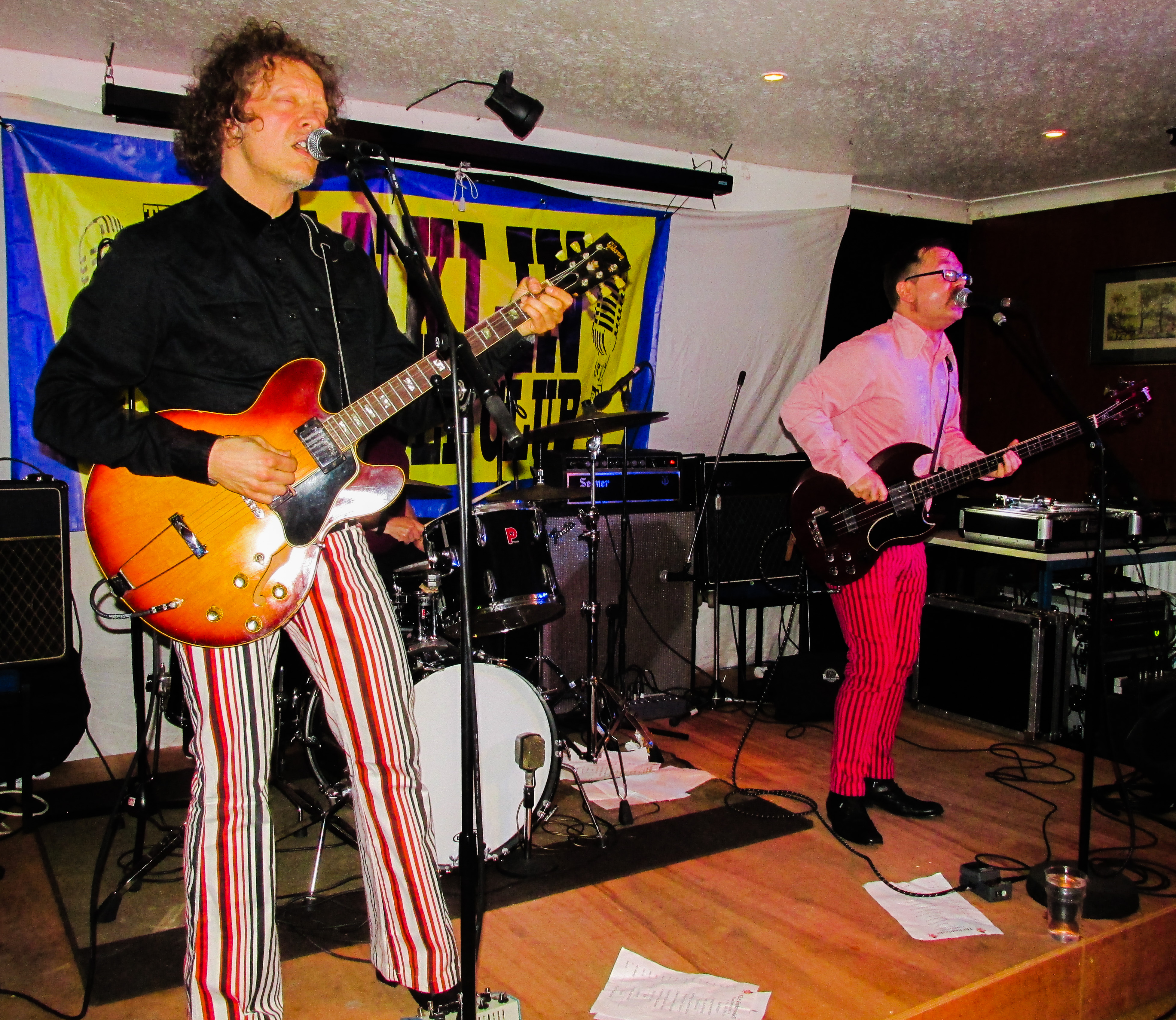 As if Lois Tozer hadn’t worked hard enough during her previous set with Thee Jezebels all of 5 minutes ago. She’s now back again with Freakbeat trio The Embrooks. And this isn’t an opportunity for her to take it easy, because The Embrooks take the roof off. Having seen them as recently as 20 years ago, my recollection is slightly hazy, but tonight they are absolutely on it, all that and they win the stripiest trousers contest hands down. They debut a fab new song, the new single perhaps? And old fave ‘Helen’. Their power-pop freakbeat Who-esque predilection is evident, but it’s their own sweat, tears and drive that make the difference. Absolutely stonkin’. 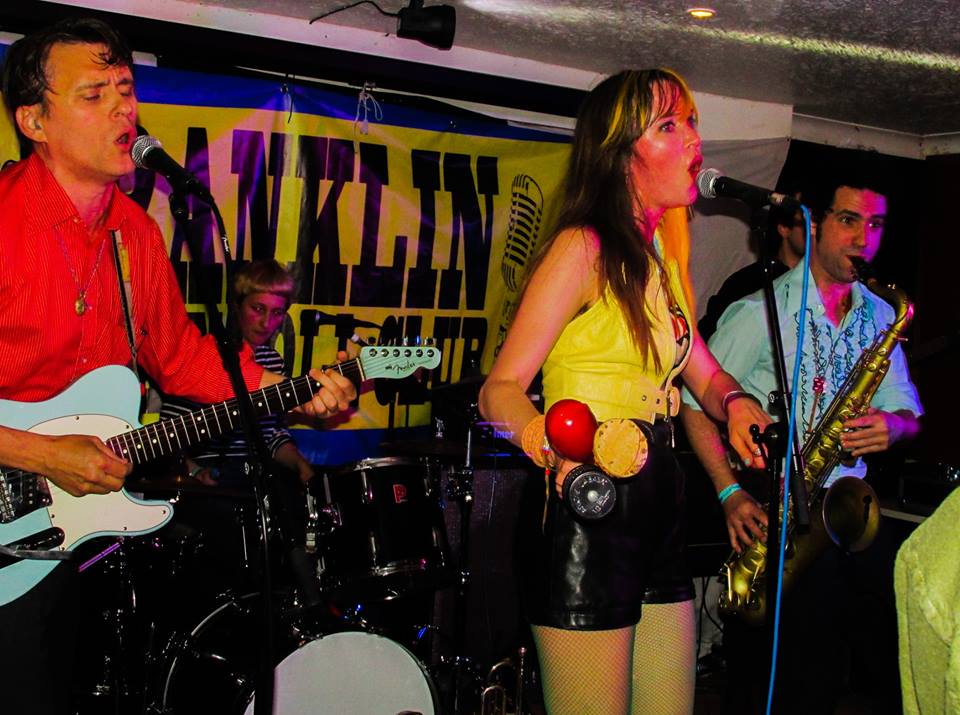 Oh! Gunquit are reserved for the finale of the Franklin Fest 2016, and quite rightly so. They know how to pound out those rhythmic hypnotic voodoo beats. (And is it just me, or do the band always appear to have a green light shining over them, like the lighting from a 60’s monster movie?) Anyhoo, that steady rhythmic beat is the link that keeps it all together, and the crowd entranced. Oh! Gunquit know how to put on an animated performance, and tonight they don’t disappoint. ‘Lights Out’, ‘Bad Bad Milk’ and ‘Sink Hole’ all go down a storm (natch), but it’s ‘Caves’ where vocalist Tina crawls through the legs of lucky Franklin Fest-ers, that things get just a little bit wild. They’ve reached the end of the set, and as much as we all don’t want this to end, it does. What a fitting finish to the weekend. Viva la Franklin Fest! 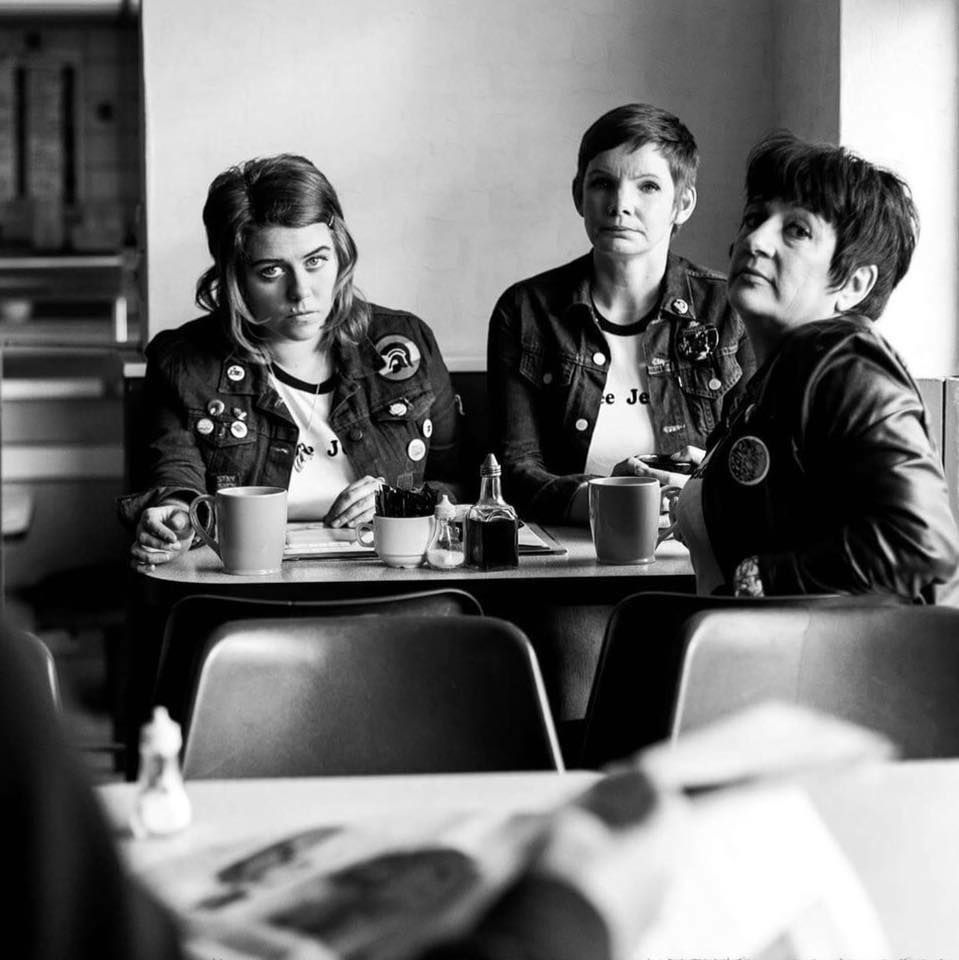 Thee Jezebels will be playing at The Franklin Fest on Saturday 25th June (that's this Saturday groovers!!) alongside The Embrooks, Oh! Gunquit, The Mindreaders and The Sine Waves.
I popped a few questions to vocalist/guitarist, and all-round cool burd, Laura...
Debbie: There seems to be quite a big buzz about Thee Jezebels, and you seem like a very hard-working band...
LA: We put out our second release via State Records in March, and coupled that with a tour around Spain. We recorded some of the gigs so who knows what we might do with that... We have only been together about 18 months now but are well proud of what we've managed to do in that time! Especially considering we don't live that close to one another. But we keep ticking over with gigs, radio airplay both here in Europe and in America, as well as writing more tunes, so we will always endeavour to keep ourselves busy!
Debbie: What can the punters expect to see from your set, and what are you personally looking forward to most about the weekend?
Something that people continually say about us is that we like to have a laugh - which is exactly what it should be about. Good tunes, plenty of beer, gettin' sweaty and crackin' jokes. Bosh. It'll also be wonderful to visit Edinburgh, but I think we're mostly looking forward to seeing all the bands! Such a great line-up! It's also excellent that Lois will be with The Embrooks and Letty will be with The Sine Waves as well! Jezebel take-over!
Thanks v much to Laura. Tickets for The Franklin Fest can be purchased here.
Read more...
Subscribe to this RSS feed