Racing through two months' worth of discs this Friday afternoon so as to make up for losing a Friday to the second week of the Easter holidays in a fortnight's time. Convoluted? It makes sense to me at least.
January 2018 then and first up, on orange vinyl, are The Amazons who it seems are much loved by those at Flying Vinyl, having had an offshoot special release too. Brave folks in this era to name yourself after a tax-dodging retail outlet we love to hate but up to them. Musically I'm left cold right away by the piano-driven 'Palace' (assumed to be the song on the side labelled with the image from the front of the cover). 'Ultraviolet', listed in the booklet as the initial track is definitely worthier of that position, anthemic as it aims to be. It's also indistinguishable from the rest of it's ilk. If you're the right age it'll probably be a favourite for a few years and you'll ask 80 year old Steve Lamacq to play it for you for some nostalgia when you first become a father or mother but I've no need to keep it. The band's site shows they have a new album due out next month so no doubt live shows will coincide.
Nia Wyn brings Duffy to mind (& what's she up to now?) The phantom of BBC Introducing hangs over her, like it did Isaac Gracie the other week.'Do You Love Enough' has a pleasant beat to it and is a wee bit haunting vocally but overall it's pretty thin stuff. 'Help Me' sounds a bit more like Janis Joplin but that's never a positive from my point of view. Again the beats are okay but it doesn't grab me so up for sale it goes. From a look online Nia appears to have not been up to much in the last 15 months but she does have a gig in Brighton in May.
Demob Happy get transparent green for their weighty outing 'Be Your Man' b/w 'Dead Dreamers'. QOTSA are a very obvious influence here. Which is all well and good but does it inspire me to seek out an album's worth of material by them? The A side overstays its welcome and the B side sounds too much like Muse for my taste so another for sale. The band are touring the USA throughout this coming May.
Violets' 'Falling In Time' is another glacial, smooth ,'80s-like piece of pop, suitable for the background in a TV drama but not much else. 'Bodyshock', on the reverse, is equally unshocking. The disc was apparently last bought on Discogs for 60p in January this year so looks like it's the flea market box for it. Typically it's not easy to find an online presence for their name so no idea what they're up to at the moment.
Finally this month we come to Luke Marzec's 'Another Guy' and 'Say One More Time'. The A side's a minimal electronic effort with him singing for our understanding over the limited beats and synths. The B side is even more minimal. Music to go to sleep to. Another one for the flea market as, despite his  supposed "host of loyal listeners" no one's bought a copy from Discogs since last August and even then it commanded less than £3. Facebook shows Luke had a new song out last month.
Read more... 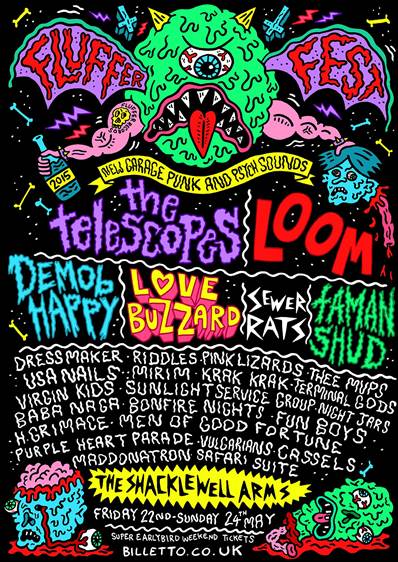 The independent UK Record label Fluffer Records have announced the bill for the weekend and it kicks off with the labelsfirst signing and brutal disco-garage duo, Love Buzzard, supported by hyped noise rockers, Dressmaker.

On Saturday grunge rockers and co-founders of Raft Records, LOOM headline above a showcase of new garage and psych bands making waves around the UK, including Fluffer’s very own Sewer Rats. USA Nails bring their own blend of kraut/noise whilst Terminal Gods promise a wave of machine beats and a hurricane of dry ice. Bands such as Riddles, The Night Jars, Baba Naga and H. Grimace keep the three day fest rooted in psych-rock.

Sunday sees a powerhouse line-up including The Telescopes, Demob Happy and Taman Shud, all providing a thrash of modern garage rock whilst M!R!M and Bonfire Nights break up the noise with more laid back, transcendental Sunday vibes.

Flufferfest will also be curating an acoustic line-up for The Shacklewell Arms beer garden for those looking to rest their ears between the wall of feedback inside.