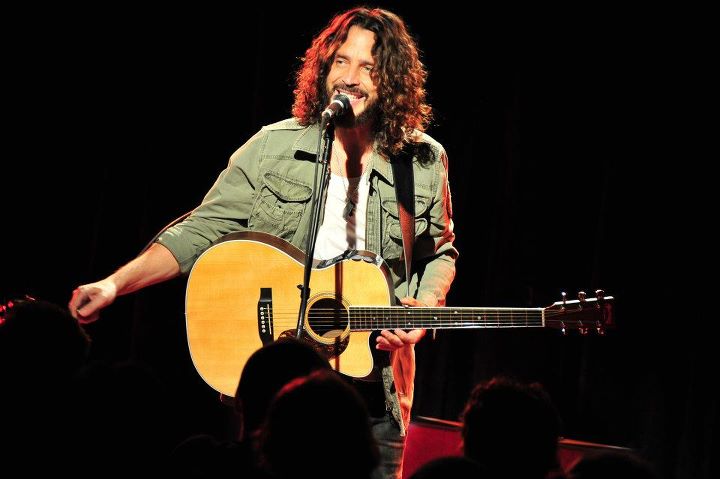 Chris Cornell’s all-seated acoustic show in the Olympia Theatre sold out months in advance. Cornell has played acoustic shows here before on the Songbook tour, which inspired him to write his latest album, Higher Truth.

Opening act, Fantastic Negrito, lives up to his name. The Oakland native introduces the opening tune, ‘Night Has Turned To Day’ as an autobiographical tune about waking up from a three week coma. Negrito strums his acoustic guitar with fingers twisted in the same car crash, as his pianist wingman keeps things turning over and provides smooth backing vocals. He is dressed in a shirt, tie and waistcoat with big hair and neatly trimmed beard, and is possessed of an incredible voice. It is expressive, and has a formidable range, like a mix of Jack White and Justin Timberlake. He is a natural performer, at ease with the audience and engaging in playful banter between songs.

Fantastic Negrito has been touring extensively with Cornell and knows how to get the audience onside. A soulful version of ‘Where Did You Sleep Last Night?’, popularised by Nirvana, gets a big response from the grunge loving audience. Negrito has wholly rewritten the song with a new bridge and outro. By the time his short set ends, Fantastic Negrito has established a rapport with everyone present and he earns a massive send-off.

Cornell enters a stage that is set up like a jamming room, on a massive rug with seven guitars scattered about between the amps and monitors. A high backed chair, a landline telephone on a table, and a turntable give it a homely look. This is an intimate gig for a man more used to playing this city’s arenas and the audience lap it up. He is accompanied by multi-instrumentalist, Brian Gibson, who earns his wage tonight as he flits between piano, mandolin and cello from one song to the next. Cornell gives a new interpretation of ‘The Times They Are A-Changing’, pacing the lip of the stage with a harmonica around his neck. ‘Fell On Black Days’ elicits the biggest reaction so far from the capacity crowd. This month is the 25th anniversary of the release of Temple Of The Dog and ‘Call Me A Dog’ is the first of three numbers from that album unleashed tonight.

Cornell has been through many incarnations in a career that now spans four decades. The setlist encompasses it all; the Soundgarden years, his time as part of the supergroup, Audioslave, and even his much derided, but commercially successful, collaboration with Timbaland. An extensive pedalboard has been sitting there unused for the whole set thus far and is called in to use for ‘Blow Up The Outside World’, with Cornell looping the guitar and playing percussively to create the outro.

For ‘Misery Chain’ from 12 Years A Slave, the record player comes into play as he takes up the mic from its stand and croons along to the record of the backing track. It’s strange to see the singer of ‘Jesus Christ Pose’ getting on like a lounge singer. He then manages to simultaneously insult and delight fans of both Metallica and U2 by playing ‘One’ by the thrash icons to the tune of ‘One’ by the local heroes. It’s a mashup that you've probably already seen on social media but, like with everything else, it is much more impressive in real life.

That twist on a cover is followed by another as he plays Johnny Cash's version of Soundgarden's ‘Rusty Cage’. Cash’s countrified arrangement has the crowd clapping along like they are at a hoedown. ‘Black Hole Sun’ is probably the best known Soundgarden number and it maintains its ability to impress even in an acoustic setting. The main set closes with another reinterpretation, this time of John Lennon’s ‘Imagine’ during which a woman in the front row openly weeps.

Cornell has already played for two hours and still we're calling for more as the set comes to a conclusion. You get your money's worth with this guy. After the briefest of sojourns, Cornell returns to the stage to sing ‘Scream’ along with the record player. There are plenty of shouted requests and someone asks for ‘Lost Cause’. “Do I have a song called Lost Cause?” He seems genuinely unsure so he makes one up. It has a key change and everything, and it sounds like a proper Chris Cornell tune.

The pedals are redeployed for ‘Higher Truth’ with Cornell down on his knees playing with the effects and building to a crescendo. He leaves us with the record player on a loop as we exit. The only nagging doubt about tonight is that the presence of the telephone remains unexplained.