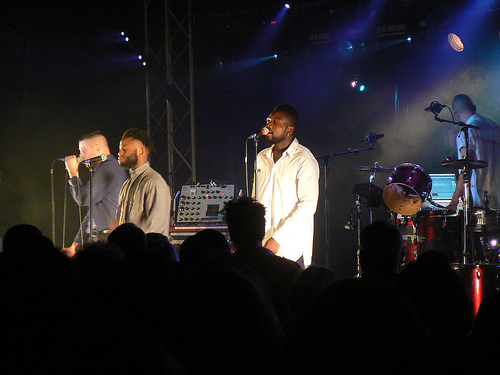 Having once again taken advantage of the glorious sunshine to fit in a couple of pints off-camp (and in the process become acquainted with the joys of John Inman’s ‘Are You Being Served, Sir?’) Brighton’s Prince Vaseline were the first act I popped in to see in action today. Some good moody indie was what I got for my efforts, with a really nice interplay of male & female vocals running through the bulk of the set. In their faster numbers there’s a definite Stereolab influence which was a further pleasing element.

Stepping back into daylight and a more traditional sound for the location was wafting from the Skyline stage in the shape of Big Hogg and their brass-infused pop. Pleasant enough but not what I was looking to sit around and experience long term. This was though a stage throwing up oddly placed acts today. Later on Walleater displayed far fewer teeth than their name would suggest whilst Skinny Girl Diet (who drew a good sized crowd) alternated between trying to destroy the place with crushing riffs and screeches and applying the band aid of sweet pop vocals. A visceral act who were definitely placed wrongly. Following them came the dream pop of Emmecosta who played away manfully despite having an audience in single figures. Unbilled there was also an angsty indie trio on later in the evening but as the singer wasn’t clear when saying their name I’m clueless as to who they were.

Opening the main stage was the thoroughly energetic and cheery Misty Miller and her band. Top marks for wit for the song ‘You Can’t Date A Model’ and for letting me witness four older ladies make use of Shazam when a cover version was announced but the title kept a secret (turns out it was a 1D one but I bet Misty’s version was better). Whilst maybe not quite the female version of Theo Verney her’s was an infectiously upbeat performance and definitely crowd-pleasing.

Another cheery chappy was Jonnie Common. Having last seen him in Edinburgh a couple of years ago and recalling that show as fairly dour the other side of the coin was most definitely to the fore here in Bognor. Chatty, cracking the odd joke, querying who’d enjoyed Public Service Broadcasting the night before & generally obviously having a good time his was a fun set to watch. Involving a live drummer throughout also paid off in spades. As it did for the massive performance from Young Fathers later on the same stage.

As Mercury Prize winners they could easily have viewed this date as a contractual obligation they were now too big to do justice to and just gone through the motions. Clearly though they have the pride and desire to give the utmost of themselves when in a live setting. They’ve things to say and aren’t going to let the message be diluted by laziness. Someone I passed by later on described them as punk. Not a description I’d previously have thought of applying based on the contents of DEAD or White Men Are Black Men Too but with the extra urgency the songs gain from the physicality of the band’s performance it’s not very far off the mark in a sense. In years to come being able to say you saw the band give such a vitalic show in a venue of this size, with no security barriers or worried looking chaps in luminous vests between you and the stage, will be a tale to inspire envy.

Pinkshinyultrablast were the first of the night time acts on the main stage tonight. Their sound lacked a bit of presence although that seemed to be the case if you ventured to the back of the hall no matter who was on so possibly it’s a design feature of the space, allowing you to talk without the murmur annoying those more into whomever’s on stage. They rattled through a good set (possibly finishing 15 minutes early) and did the shoegaze revival proud. Things here finished off in mildly psychedelic vein as Lola Colt’s hypnotic, emotionally charged set preceded headliners Spiritualized. As assured as when I saw them play the Liverpool Psych Fest the other year you would hope that they’re one of the acts to have benefited from garnering a bunch of new fans from this weekend as, despite the size of audience they’d attracted, it wasn’t wholly clear many there already knew them.

Fresh from headlining this year’s Psych Fest Spiritualized teased out their arrival onstage with an over long intro tape and then suffered IT issues with their projected backdrop for the length of their 90 minute set. Either that or they were being sponsored by Benq. Jason Pierce played the entire show seated, whether through injury, illness or tiredness was never made clear. Kicking off with ‘Hey Jane’ from the most recent album Sweet Heart Sweet Light they enjoyed sound that was extremely well mixed, meaning the backing vocals and even the drummer’s chimes were easily discernible throughout. Visually though the backdrop, when working, wasn’t really enough to keep that element of the senses fully engaged – a fully mobile frontman would have done that a lot better and as such from about the point that ‘Electricity’ ended there was an air of self-indulgence in the lengthier instrumental parts.

With no overruns it was easy to close out the three days back in Reds one last time to enjoy the final act of the festival, Cult Of Dom Keller. Only a select few had decided to do the same so it was rather like seeing one of the afternoon bands in that respect. Theirs is a distinctly late night sound though – dark, swirling and enthralling as time and again someone’s reminded “You are not my god”. A fine end to a good first effort.

Further photographs from the event can be found here.

Earlybird tickets for Rockaway Beach 2016, from as little as £79, are available here.