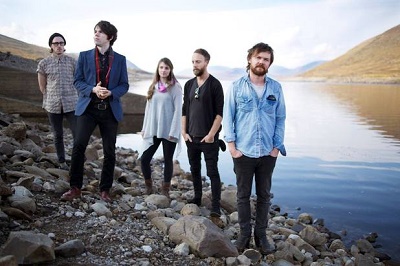 There’s such a marked divide between the baggy-jumpered, yelping Idlewild of the mid-nineties and the corduroy-blazered, thoughtful Idlewild of today, it could be incongruous watching them play the prickly punk of 100 Broken Windows in between the anthemic rock of The Remote Part or Warnings/Promises. But the ebb and flow of the band’s setlist tonight at the Roundhouse has not just been thrown together, and as Roddy Woomble paces back and forth across the stage like Liam Gallagher while the other six members dance around him, it is perfectly obvious that Idlewild are as at home pogoing around to riffs as they are staring into the lights and harmonising.

They ease into the night with new song, ‘Nothing I Can Do About It’ before jumping into rock-compilation staple, ‘You held the world in your arms’ and the stomping beefcake of a single that is ‘Collect Yourself’. Guitarist Rod Jones dances around the stage grandstanding, eyes closed and guitar in the air, and as the band go from the chorus/anti-chorus of 1999’s ‘Roseability’ (‘GERTRUDE STEIN SAID THAT’S ENOUGH’) to the earworm off-beat of 2002’s ‘Live In A Hiding Place’, it becomes obvious at what point the change happened in Idlewild, when the spiky riffs and non-songs of 100 Broken Windows transformed into the smooth flow of the rock anthem.

Idlewild sprang out of the rather traditional nineties build-a-band approach of a few people meeting at a party and discovering they all owned the same records. And as a band, are steeped in tradition, homeliness. Despite all the swagger of some of their newer material, this is still a band that feels very personal, local no matter where you live. They are also unmistakeably Scottish in their bones, grounded in the earth, both in the band and around it. Edinburgh brewer Barney Jones is currently brewing a batch of Idlewild ale (‘Scottish Fiction IPA’) and Roddy still contributes a regular column about Scottish hillwalking to walking magazine The Great Outdoors. It’s called ‘Woomble’s Way’.

As the granite lilt of Scotland’s late poet laureate, Edwin Morgan forms the top bed of the barnstorming love-punch of ‘Remote Part/Scottish Fiction’ during the encore, the rafters of the Roundhouse begin to shake. As the lights turn out to the audience, it becomes obvious that it is not dominated by either gender, or any age bracket. Watching the crowd, it’s clear every person with their eyes closed and their fingers in the air has their own Idlewild. Because although Idlewild might have changed a lot over the course of the last two decades, they’ve never stopped doing that. Whether it’s bouncing around to ‘These Wooden Ideas’ or singing the chorus to ‘El Capitan’, Idlewild somehow always manage to write songs that become very personal to you, the songs you sing along to with your eyes closed, and your hands in the air.