The Physics House Band's 2013 debut EP Horizons/Rapture was intoxicating at worst and mind-bending at best. A fantastical instrumental mix of genres, the six track release was something to decipher and enjoy, as its layers unfolded listen after listen.

After a painful four year wait, the Brighton trio have returned with Mercury Fountain, a collection of nine new tracks to bewilder and entertain, prefaced by a PR blurb written by none other than the respectable Stewart Lee (he knows his stuff).

This new age mini-album is less focused on the raucous than its predecessor and flows like a straight-up post-rock record for a major chunk of its running time. From the looming tones of opener 'Mobius Strip' to the unsettling passage of time on second track 'Calypso 2', there appears to be a new limit placed on the band's ferocity.

'Holy Caves' appears to be a spacious stepping stone to the rocking tumble of 'Surrogate Head' which fails with guitars like the best of the instrumental soundscape builders (for example, And So I Watch You From Afar), before the delicate 'A Thousand Small Spaces' provides some welcome breathing space.

'Obidant' then shakes you violently from this dream in the most "like the old stuff" way possible, as you can almost hear the trio sweating with exertion as the layers of sonic wonder hit your ears. 'Impolex' and 'The Astral Wave' are reminiscent of the like of Battles as they ebb and flow with energy, building up mighty peaks of sound before swiftly deconstructing them.

As 'Mobius Strip II' ends proceedings in a subdued and sophisticated manner, you can't help but feel that this is "intelligent music". Painstakingly constructed layer upon layer to strike the perfect ambience, and telling this coherent but hidden narrative through the nine tracks, The Physics House Band are simply a wonder to behold.

Mercury Fountain is available from Amazon and iTunes. 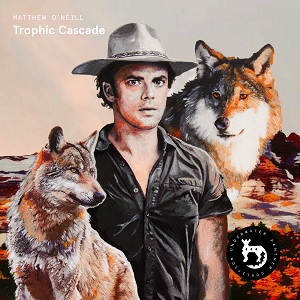 Now, I don't listen to a whole lot of Americana, so I'm not going to pretend to know much about the genre or its background. Instead I'll just give you my thoughts on the new record from New York's Matthew O'Neill straight, the thoughts of someone from Glasgow with a preference for math-rock.

Trophic Cascade is the name of that record, and its also an ecological concept (look it up, if you want). It consists of 14 tracks, which each track being built in some part on a foundation of twinkling guitars. There's a spectrum of flavour on offer here, like an enticing ice cream parlour or intriguing packet of jelly beans.

Proceedings begin with the emphatic tones of 'Bridge Builder', setting the energy bar high from the outset, something which is definitely not adhered to. The reflective style of 'Golden Boy' kills this pace immediately and offers the listener some time with their thoughts, an atmosphere continued on the piano-tinged 'Ain't No Way'.

By contrast, 'Louisiana' possesses a considerable amount of swagger and the feel and vocal harmonies of 'Stand Tall' make it one of the record's undeniable highlights. Switching things up once again in this album of variety is '1000 Years' which introduces a jarring but welcome droning sound to the mix, and a healthy dose of musical drama.

'Alzheimer's Blues' and 'Breakstride' possess the most flare of the record as they progress as a jaunty pace, with the former being laced with some enticed blues guitar licks amidst the relatively subdued nature of the record as a whole. Things reach a wild and passionate peak on penultimate track 'Tunkashila', before closer 'Relaunching' finishes off Trophic Cascade with a sweeping and emotional track.

Clocking in at just under 50 minutes, this 14 track collection is something of a hit-and-miss mish-mash of compositions. For each peak there's a trough, and whilst a non-stop sitting may seem arduous given the constant changing of pace, dipping in and out is likely the most rewarding approach to enjoy this eclectic record.

Trophic Cascade is available from Amazon and iTunes.