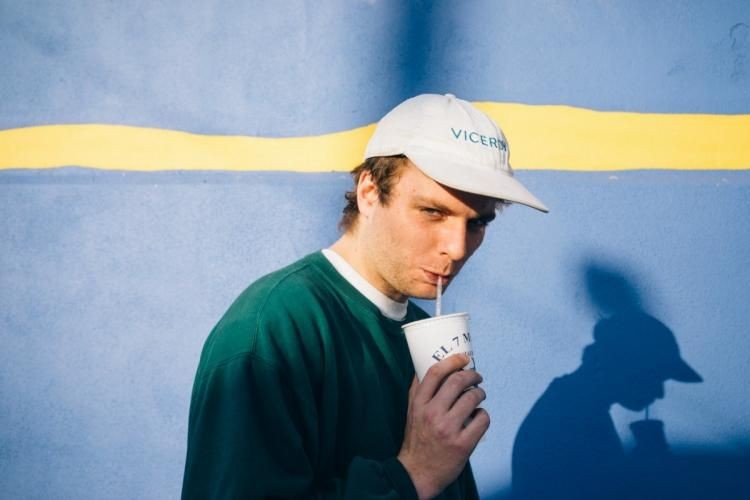 In the middle of a 3 night residency at London’s Coronet, Mac Demarco gives a packed crowd exactly what they want: a light-hearted performance awash with puerile jokes, playful covers and an occasional nod to a growing back catalogue of exceptionally well written songs.

You see Mac Demarco is a deft songwriter; a multi-instrumentalist with talent that you’d kill to have. His voice is impressive, in spite of his considerable cigarette intake, and this shines through on hazy tunes like ‘Ode to Viceroy’, on synth-laden gems such as ‘Chamber of Reflection’, and more recently through the soft introspection shown on ‘My Old Man’ and ‘Still Beating’.

The shift on 2017’s This Old Dog paints Mac Demarco as a maturing songwriter capable of producing sincere, honest and poignant tracks in a way unbecoming of the poster kid for layabout hipsters.

Based on tonight’s performance, it seems that it may take some time for his live show to catch up with the unassuming maturity of these hits. Of course, performance needn’t, and shouldn’t be a chore, but much of his best songs are overshadowed by protracted banter and worn out jokes. Something funny winds on for ten minutes at a time, breaking the performance into small sections and turning a short entertaining respite into a stalemate which can wear thin on the patience.

Saturday night is off to a flying start with opener 'On the Level', before the synth-keys are switched up for the delicious guitar licks of 'Salad Days' and 'No Other Heart' as the band swigs their beers.

There’s a notable turning point though, when someone from the crowd throws Mac a Tesco Meal Deal sandwich and a packet of crisps. The wheels begin to come off.

I’m loathe to mention the famous gig where Mac shoved a drumstick up his own arse on stage, but it’s important, because you can’t help feel that that while his talent deserves to sell this venue out three times over, it is this notoriety that has put him on the radar, and become part and parcel of what this crowd expects from him.

Mac and his band veer from playing through their hazy blend of indie rock and synth pop, and instead become distracted, almost turning the night into a jam session which just so happens to be shared by over 2,500 people.

The biggest cheer of the night, for an established headline-act, is for him eating a sandwich. Though he has had 5 full releases, it’s easy for Mac to relax and dine out on this reputation as a goofball. This persona is infectious and part of his charm, but he needs to make sure doesn’t work to the detriment of his music.

Following his crisp-eating, he plays ‘This Old Dog’, and the response to what is one of his most endearing heart-on-the-sleeve numbers, pales in comparison to his eating a cheap snack. It’s tenderly reflective, but the impact on the young dungaree-cloaked crowd is minimal.

At this stage, Mac asks the lighting technician to change the lights. He’s ignored – and you can’t help feel like that’s quite an apt response, as if to say, ‘you needn’t worry about your performance Mac, just have a laugh.”

From here, he plays a mash-up, combining sections of  ‘Chestnuts Roasting on an Open Fire’, ‘Duelling Banjos’, ‘Sweet Home Alabama’, ‘ Still DRE’, ‘In Da Club’, ‘The Way It Is’. Even in doing so, he shows off an impressively high vocal range, but it’s all a joke. This teenage band practice gets bigger cheers than any of Mac’s own songs.

There are moments of beauty nevertheless. With ‘Cooking Up Something Good’ and ‘Freaking out the Neighbourhood’ acting as particular highlights, meeting the crowd in the middle between up-tempo jauntiness, while Mac is able to deliver his own work with more conviction than any cover.

Towards the end of the night, Mac comments, “I hope you guys are having fun, because I think we’re having a bit too much fun up here.”

The two aren’t mutually exclusive. The crowd are in raptures. But that’s not to say that Mac isn’t taking his position too flippantly when performing with his full band. Once the scene moves on, Mac will still be a hugely talented songwriter, but let’s hope he hasn’t so firmly made being a goofball his particular brand – because with such skill, it needn’t be.

Following critical acclaim for sophomore release Capacity, Brooklyn’s Big Thief are once more on European shores and tonight they play a sold out show to 800 fans at Islington Assembly Hall.

When I caught Big Thief in February, they seemed destined for a bigger stage. They were then housed by The Lexington, and a capacity of 200, but a growing fan base and critical acclaim for Capacity, has seen them since announce a show at London’s Koko (capacity of 1,500) for April 5th 2018.

Tonight they perform as a trio. This is as guitarist and co-founder Buck Meek is absent while he focuses on an upcoming solo record.

Overall, he is missed. As Adrienne Lenker’s main collaborator in song-writing, his influence upon the band’s sound and confidence as a live outfit is huge. Big Thief are often refrained on stage, and it is part of their charm. However they seem to have closed off from the audience while they venture into these uncharted waters.

“Where’s Buck?” someone calls from the crowd, prompting a strange response from the usually shy Lenker. She literally screams with frustration, explaining that they have been asked that question every night of the tour so far. She tells the heckler that she doesn’t want to talk about it through a microphone, but said she will explain in person if they care to contact her, or find her after the show.

Her frustration is understandable, because their live show is still something special – it’s just different. Her palpable irritation leaves the room with an eerie vibe, like a classroom in the seconds following a teacher snapping. “We love you!” someone from the crowd awkwardly responds in turn.

Musically, without some of the oomph afford by Buck Meek’s guitar, the band are considerably more minimal. There’s a haunting quality to this and it is not without its merits as Lenker’s voice echoes softly around the Hall. Lenker truly is exceptionally talented and packs a voice that can stir a crowded hall even at a whisper. Her voice oozes a natural sincerity and is crystal clear during delicate renditions of ‘Mary’ and ‘Paul’. While James Krivchenia’s pounding drums roll under Lenker’s moody guitar and help bring stand out tracks ‘Shark Smile’ and ‘Mythological Beauty’ to life.

Closing the show, Lenker is hugely thankful to her burgeoning crowd, and calls this a “transition” period. Presumably referring to the absence of Buck, there is a change in the air, and if Buck is not to return, it may need a reshaping of their live act taking to the stage of larger venues that their quality deserves.