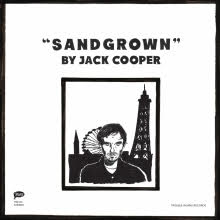 It’s probably pretty safe to say that Blackpool has had few albums written about it, despite being the birthplace of Robert Smith, Dave Ball, Chris Lowe and Roy Harper as well as ¼ of Franz Ferdinand & its Winter Gardens now regularly playing host to the Rebellion punk festival.

Jack Cooper (late of Veronica Falls, currently part of Ultimate Painting) grew up in the Fylde coastal area & lived & worked in Blackpool until he was twenty, by which time the economics of cheap overseas holidays were impacting on the beach resort. Sandgrown is the musical distillation of those formative years and the part that his location played in them.

Cooper is on record as saying of the album that “The songs that I wrote for Sandgrown suit my voice more than anything I've done before” and fans of the meatier sound of Veronica Falls should be advised that there’s a much lighter tone in play herein, more like his work with Ultimate Painting after they took their foot off the gas for album number two.

It’s therefore a work which requires some perseverance before it can make its mark upon you. With only nine, understated songs the lyrical content is no doubt where much of the album’s attractions are to be found but nothing has so far stood out particularly for me amidst Cooper’s words. Rather the mellow tone of the arrangement of second track ‘Gynn Square’ and the record’s overall position, pitched largely towards wistfulness with a dash of melancholy, have made it a pleasant one to play a number of times for the purpose of writing about it.

Cooper cites Terry Allen as an influence on his writing here along with sound of Springsteen’s Nebraska whilst Bill Fay, Robert Wyatt and John Cale are all mentioned in the record label blurb about the release. Bigger fans than I of all of those singers will likely find much to enjoy here.

Sandgrown is available from amazon & iTunes.