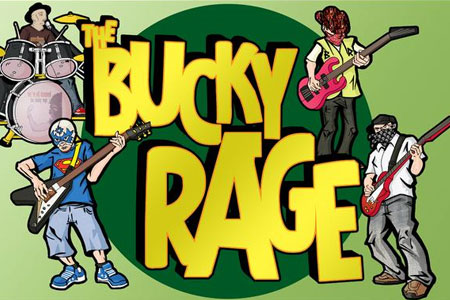 In only a couple of weeks time Glasgow's masked men of garage punk The Bucky Rage once more host the yearly Buckfest event at McChuills in their home city.

A free, eight band bill sees the hosts appearing alongside the likes of The Phlegm and The No-Things (previously highly praised this year on this very site) along with The Kosher Pickles, Creeping Ivies and others on Saturday October 17.

Kicking off at 16:30 this should be just the livener you need before getting stuck into the madness of Hallowe'en at the end of the month. Click on the event name above for up to the minute details on the day's goings on.

The Brutes, a ‘high-octane’ (by their own correct description) '60s-influenced garage punk band from Glasgow are the first up on tonight’s very exciting bill at The Franklin Rock 'N' Roll Club. They set the tone with their first number ‘Caveman Stomp’. Tonight is gonna be fun, fast, furious and in your face! ‘Trouble’ and ‘Real Gone Gasser’ follow in a similar vein; they could have been lifting these songs straight from a Pebbles comp. However, citing The Troggs as one of their biggest influences, singer Jim Spence asks "any Trogglodytes in the audience?" The response is a bit like tumbleweed blowing through a desert landscape. Undeterred, they knock out a stompy ‘Strange Movies’ by the very same. Finishing up with Wailers snotty '60s mover ‘Hang Up’ and an accelerated cover of ‘Shot Down’ by garage gods, The Sonics.

This is the third time I’ve seen The No-Things play over the past 12 months, and every time I see them I’m impressed by their improvement. I like them a lot; they tick all of the '60s garage influenced boxes for me. Laurent Mombet, also of Les Bof, is a natural front man, and he’s not afraid to show it; wearing his influences firmly on his striped t-shirt sleeve, and with an attitude to match. They describe themselves as ‘low-fi and quite primitive’, which is all true, but there is so much more to them. Dare I say it, some of their songs are downright catchy, and it’s pretty impossible to resist the urge to dance. In fact, the crowd and I are not resisting as they open with ‘The Birds’, just in case you were expecting anything less than snarly. Call and response ’Who Did You Rob, Bob’ with its 1-2-5 harmonica (I misquoted this song title in a previous review, apologies) goes down a bomb, and who did Bob rob? I’m curious. ‘Losin’ My Mind’ is another low-down dirty snarly punk number ‘’I don’t need anyone’’ shouts Laurent gesticulating, this song, reminiscent in parts, to The Sparkles' ‘You Ain’t No Friend Of Mine’. This is an intense performance, and one of the best things about the Franklin is that the stage is at the same level as the crowd, and sometimes there isn’t much of a distinction between band and crowd (why aren’t all gigs like this?). ‘Diamond Ring’ is a rendition of displeasure, chewed up and spat! They finish with ‘Don’t Get On My Tits’ well, okay, we won’t. We have been warned.

With much anticipation we turn to tonight's headliners, Les Grys Grys. With a couple of 7" releases under their belts on State and Dirty Water respectively, these 5 wild young musicians from France appear to be the darlings of the '60s scene just now. Heavily influenced by '60s r'n'b / beat and garage, with a downright durty harmonica sound, I was wondering how much of this was hype, but (thankfully) decided to bracket my judgements. People who had seen them play at McChuills in Glasgow the previous night had travelled through to Edinburgh to see them play again. Within the first 3 opening bars (as I scraped my brain from the back wall) I fully understood why. No pleasantries here, just straight into a full-on cover of 'Milk Cow Blues'. Clealry taking their influences from bands like The Outsiders, Pretty Things and Downliners Sect, to name but a few. Their version of 'At the River’s Edge’ (New Colony Six) is thumping and driving, and without pause we're onto Nederbeat with ‘You Mistreat Me’. Could this be The Outsiders? Is this what it was really like to see a band in ‘65? I convince myself for a moment that it must have been. They barely come up for air throughout the whole performance, and are not afraid to get sweaty. ‘Got Love’ (totally goosebumpy), ‘Tiger In Your Tank’, and ‘Roadrunner’ are all performed with authentic reproduction, energy and raw passion. I look around and I can't see anyone in the crowd that doesn't have a grin from ear to ear, it is completely intoxicating. They are also not afraid to get amongst the crowd, standing on seats and tables, and did I imagine this or was the guitarist playing his guitar with a drum stick? As the set draws to a close (sadly it has to end, they must surely be exhausted by now!), we are treated to some real rock and roll maraca smashing action! If you get the chance, go see them play.

Thanks to the organisers, this has been another fabulous night at the Franklin Rock 'N' Roll Club.