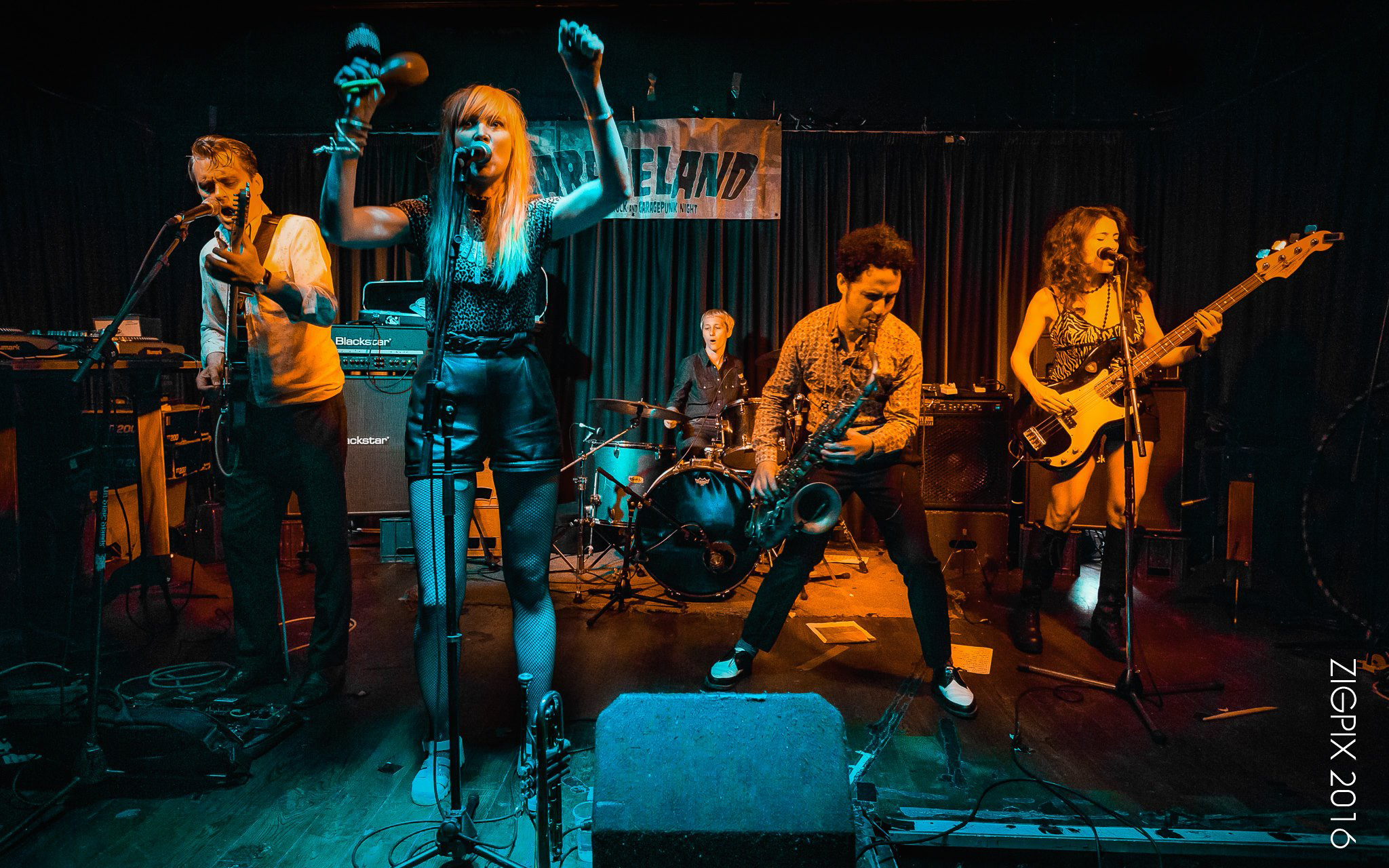 Muso's Guide's favourites, Oh!Gunquit return to Edinburgh on Saturday 25th June to play as part of the Franklin Fest 2016 alongside The Embrooks, Thee Jezebels, The Mindreaders and The Sine Waves - what a line-up! The question is, is that little green shack up to all that shakin'? You betcha.
Debbie: Always a pleasure to chat with you. What's been happening on planet Oh! Gunquit we last saw you play at The Franklin R'N'R Club in November?
OG: We have our new 7" single (produced by Jim Diamond) coming out on Trash Wax Records (with video) & also currently working on the our second album which we are hoping to start recording in September/October. Regarding shows we have recently played out in Spain & France which was great fun and are also looking forward to playing at the Clerkenwell Festival in August (London) which is getting bigger & better every year...and we can walk there haha, but even closer is the Somers Town Festival which we could roll out of bed & play...(which we may well do).
Debbie: For those who may not be familiar with Oh! Gunquit, introduce them to your unique family...
OG: Oh! Gunquit is the gay capital of New England - USA & is mentioned in the film 'Seven Year Itch'. Simon is currently the only British born member of the group and is always looking for the perfect quiff wax. Tina has midget thumbs and a mean high-kick. Alex can out-manoeuvre lightning & lift quadruple her weight in cymbals. Tina had her shoes licked clean on-stage in Valencia. Chuchi has a serious aversion to baggy jeans & slip-on shoes. VV has the biggest hair in rock 'n' roll.... We ate a few drummers.
Debbie: What is your solemn promise to the Franklin Fest goers?
OG: Hopefully you'll see a great rock 'n' roll gig that combines lots of different sights & sounds... Maybe you'll do some human caving, maybe you'll get all hot under the collar and shake out some Ju-Ju, maybe you'll dance yourself out of your socks, so you definitely won't see any shoegazing and with any luck you'll let it all hang out with wild abandon and immerse yourself in an exotic trip with us!!
Debbie: Apart from the atrocious weather, what you are looking forward to the most about playing at the Franklin again?
Well we absolutely loved playing in Scotland & the Franklin crew last year so can't wait to go back, last time we came we arrived as Hurricane Abigail was unleashed and we witnessed horizontal rain for the first time.. We are also really looking forward to hanging out & talking nonsense with all the other bands and DJ's on the bill and also meeting new rock 'n' roll reprobate friends/fiends that inhabit this international club of freaks...
Debbie: I'm sure that can all be easily catered for ;)
Tickets for The Franklin Fest can be purchased here. Oh! Gunquit will also be playing the Some Weird Sin all dayer on 20th August, details of which can be found here.
Read more... 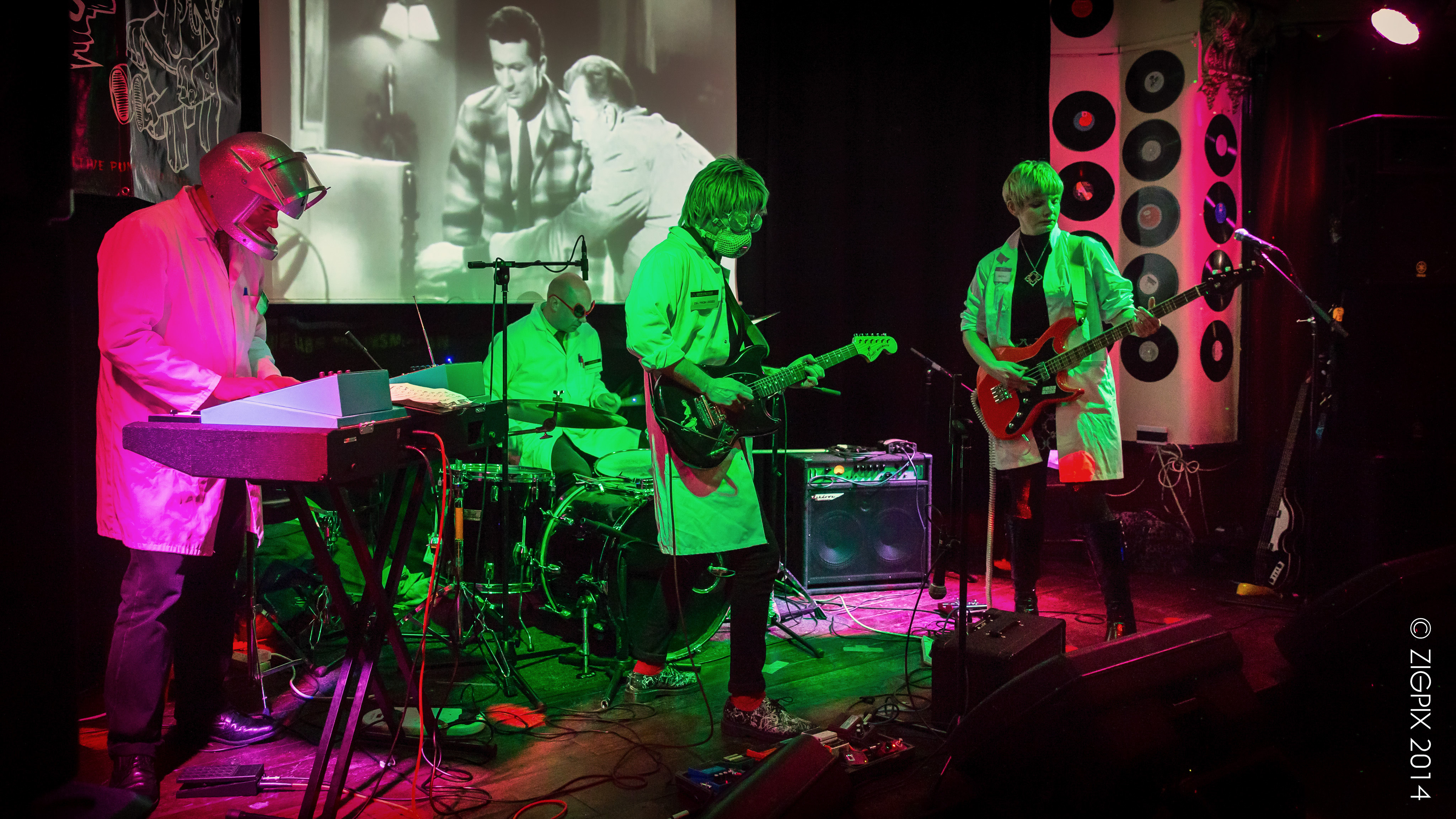 The Sine Waves will be playing on Saturday 25th at The Franklin Fest from 7pm with the likes of: Oh! Gunquit, The Embrooks, Thee Jezebels and The Mindreaders.
Debbie: Earth calling Planet Sine Wave... please explain yourselves...
SW: Well, funny you should ask that. It's an interesting time in the Sine Waves Lab. We are currently cloning a new guitarist with interesting modifications of the original model, the Deltron 2000. Early tests suggest this has been wholly successful. The new model is called Molecule aka The Mighty Atom. We are extremely happy with it, having carried out a recent field test in San Sebastian at the Medway Legends Weekender.
Debbie: Wooo, sounds intriguing... and releases...
SW: The band released a mini-album in Compact Disc format last year and this will be available from the Franklin Fest Official Souvenir Boutique for a nominal sum. An expanded vinyl version of the album has, alas, been delayed in the post-production process.
Debbie: ...and gigs?...
We are very much available for bookings, having previously visited places as far afield as Liverpool, Brighton, Bristol, Bath, Livorno, Liege & Middleburg. We all love to travel - exploring strange new worlds, seeking out new life and new civilizations etc.
Debbie: Please tell us a bit about the band (interesting and maybe irrelevant facts - all are welcome!)
The band was formed in 2013AD and is based in Hastings, on the Sussex coast. The sea air makes us much healthier than other bands, especially as bassist Spectrum LG is an avid marathon runner, so does more than enough exercise for all of us. She is also a Mathematics teacher and Jezebel. The band strongly advocates the study of maths and science for pleasure.
Debbie: eeeeeeeek! >_< (maths is like torture for me!)
SW: Keys wizard Project X is the band's boffin, who spends most of his time in his workshop (or on the dining room table) tinkering with electronic components and building his own collection of bespoke organs, theramins and time travel capsules. He is a man of uncompromising musical tastes and he and Spectrum are responsible for the superb monthly Fratcave in Hastings, which extends a warm welcome to fuzzed-up, high octane garage, psych and surf bands worldwide.
Debbie: WOW.
SW: At the bongo end of things is Dr Magnus Psyke, who has been transmogrified from previous incarnations in bands such as The Dentists, Armitage Shanks, Ye Ascoyne d'Ascoynes and Auntie Vegetable, to play a surf beat with a reasonable degree of competency. 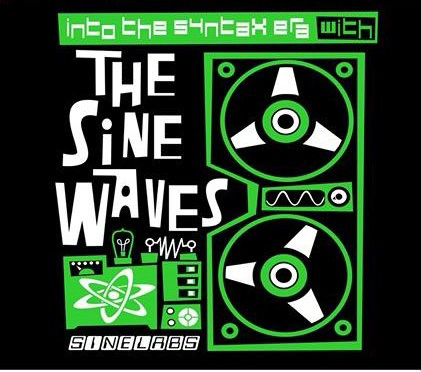 Debbie: Other than by cosmic mind manipulation, how would The Sine Waves go about persuading mere earthlings to come and see you play at the Franklin Fest?
Well, I wouldn't necessarily advocate going out of your way if you've already got other plans, simply to see us. If the prospect of seeing the Mindreaders, Jezebels, Embrooks and Oh! Gunquit, isn't going to tear you away from Kojak and the Generation Game, or whatever is on the box on a Saturday in this century, then the prospect of a half-hour of science-based garage surf instrumentals is unlikely to tip the balance. On the other hand... Where else can you see a half-hour of science-based garage surf instrumentals at a festival named after one of the world's bravest, craziest and unluckiest explorers? (early polar exploration is one of my pet subjects)
Debbie: Surely they beta-max Kojak for a later date? Best of both worlds! Lastly, what are you most excited about for the Franklin weekend?
Meeting up with old chums and new chums in one of the finest cities on the planet - What could be better? Reacquainting myself with haggis, pound notes and blue-headed matches, and wondering if I'll see the ghost of the girl who smiled at me once on Cockburn Street in 1993...
Thank you, and thank you again, to The Sine Waves. If you're still wavering about buying that ticket, then stop it already! Here is the link... tickets-scotland.com
More info on The Sine Waves can be found here... https://www.facebook.com/TheSineWaves/?fref=ts
Read more...
Subscribe to this RSS feed